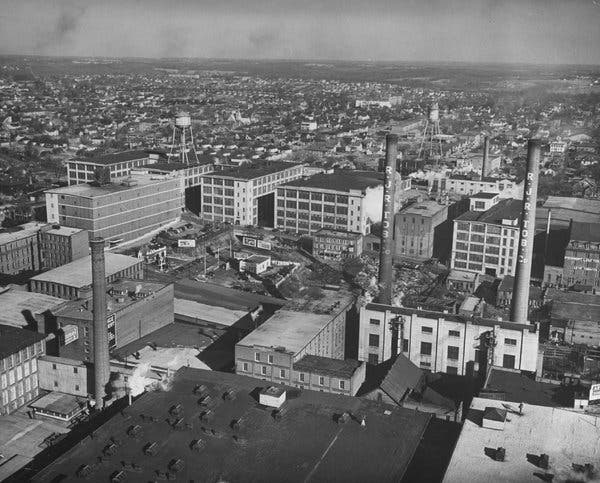 WINSTON-SALEM, N.C. — Within sight of a couple of huge brick smokestacks, looming witnesses to a past built on tobacco and powered by coal, there is something weirdly out of place about Wake Forest University’s Institute for Regenerative Medicine.

It is run by Dr. Anthony Atala, lured to town 15 years ago from his perch at Boston Children’s Hospital to oversee a group of scientists engineering lab-grown organs for human transplants. For the city, his institute represents an opportunity to leap from an industrial past into the future.

Dr. Atala comes up in conversation all the time: with the head of the Chamber of Commerce, with the mayor, with the executive director of the Venture Cafe, where entrepreneurs come to network. His institute was one of the early residents of the Wake Forest Innovation Quarter, a research-focused district in the downtown cigarette factories that R.J. Reynolds abandoned long ago.

And yet like a spaceship parked in a pasture, Dr. Atala’s institute underscores how far Winston-Salem has yet to go from its manufacturing past — as a thriving center of the tobacco, textile and furniture industries — to become a biotech center.

For all the wonders in Dr. Atala’s lab, Winston-Salem is not keeping up with the nation’s larger cities. Even after adjusting for its lower living costs and subdued inflation, income per person declined to 90.9 percent of the average for metropolitan areas in 2017, from 93.7 percent in 2008, government statistics show.

“Desperation may be too strong a word,” said Nathan Hatch, the president of Wake Forest University, a focal point of Winston-Salem for more than half a century. “But this is not a self-generating place. We have to be very aggressive and creative.”

Winston-Salem’s predicament reflects a larger social and economic challenge: the widening gap between a limited set of successful cities — which draw both highly educated workers seeking well-paid jobs and high-tech companies that want to employ them — and pretty much everywhere else.

This new pattern of economic development amounts to a fundamental break from the decades after World War II, when poorer and generally smaller cities were catching up with richer, bigger places. In recent years, this convergence stopped. Many midsize cities and small towns that found manufacturing-based prosperity in the 20th century have lost their footing in the tech-heavy economy of the 21st.

Median household income in 1960 (in thousands)

In recent decades, the income gains of larger and smaller places

Median household income in 1980 (in thousands)

Median household income in 1960 (in thousands)

In recent decades, the income gains

of larger and smaller places

Median household income in 1980 (in thousands)

What happened? The cheaper labor that smaller metropolitan areas offered, attracting investment when factories ruled, no longer has much pull. The companies now leading the economy gravitate toward big cities where they can find clusters of highly educated workers and attract more. Amenities — bars, yoga studios, restaurants — follow. So does venture capital. Housing costs rise, making it tougher for workers in lower-paying jobs to stay.

The shifting economic geography is also altering domestic migration, which once helped to close the economic gap between rich and poor places. Rich urban enclaves like New York and Silicon Valley are bringing in affluent, highly educated young people but pushing out many residents who are older, less educated and less well-to-do. On the other end, the populations of many smaller cities, including Winston-Salem, are growing even as incomes fall behind.

Many other small and midsize areas that were once gaining ground economically are similarly falling behind, including Bangor, Me.; Monroe, Mich.; and Greensboro, N.C. Even the Lexington-Fayette region in Kentucky, home to the largest Toyota plant in the world, is losing ground.

Each place has its own story. Many of Bangor’s paper and lumber mills went out of business as Chinese imports surged and construction slowed. Monroe lost its Ford stamping plant and many of its auto suppliers. Greensboro, like Winston-Salem, declined along with employment in the tobacco industry.

The critical question is whether midsize cities are doomed to stagnation. Can Winston-Salem hitch its future to new engines of economic growth? With its Innovation Quarter and its Institute for Regenerative Medicine, it wants to say yes. But it doesn’t really know.

The metropolitan area’s population of 670,000 is growing. Some 45,000 jobs have been added since the trough of the Great Recession nine years ago. Zillow rates the housing market as pretty cheap, but “very hot.” At 3.8 percent, the unemployment rate is roughly in line with the national average.

The overall picture, however, suggests an uphill struggle. Private-sector employment is barely higher than it was in 1999. The median wage is $16.87 an hour, almost $2 below the national average. The poverty rate is higher.

Winston-Salem has been overshadowed within North Carolina by the Raleigh-Durham area, an early success in building a research-driven economy, and Charlotte, a financial hub. The last time that the Winston-Salem area had a higher income per person than Raleigh, 100 miles to the east, was in 1977. By 2017, Raleigh was ahead by 22 percent.

R.J. Reynolds, now a subsidiary of British American Tobacco, still has its headquarters in Winston-Salem, but automation has displaced most of the workers. The apparel giant HanesBrands sent most of its manufacturing work abroad long ago. The furniture industry has been hard hit by Chinese imports. All told, the metropolitan area has lost almost half its factory jobs since 1993.

High-profile efforts to bolster the city’s economy fell short. Dell, given a multimillion-dollar incentive package from state and local authorities, opened a plant in 2005 but closed it four years later, laying off more than 900 workers.

Then Caterpillar came, also lured by local incentives, but it has not met its original target of 510 full- and part-time jobs. Currently, it has around 160, down from a peak of more than 400. Bank headquarters have left: Wachovia in 2001, when it was bought by First Union; BB & T in 2019, when it merged with SunTrust. Krispy Kreme, the doughnut company, is moving corporate operations to Charlotte and food-production services to Concord.

The city made a bid for Amazon’s second headquarters. But though Amazon will build a fulfillment center in nearby Kernersville, where FedEx runs a distribution hub, Winston-Salem didn’t make the short list for HQ2. “If you go down the Amazon checklist, it requires all the things that we don’t have,” said Koleman Strumpf, a professor of economics at Wake Forest. “We don’t have mass transit. No Amtrak. No good airports. It’s not a walkable city. It doesn’t have great amenities.”

If any middling city can make a transition to a technology-centered future, however, Winston-Salem should. It is home to five universities, including Wake Forest, an institution that enrolls four out of its five students from out of state. Transplanted to Winston-Salem in the mid-1950s under the Reynolds family’s patronage from its original site near Raleigh, the university has a leading medical school, which it hopes will anchor a biotech ecosystem.

“The top talent is going to go to the coasts, no doubt about that,” said Graydon Pleasants, head of real estate development for the Innovation Quarter. “But there are plenty of smart people who will come here.”

Winston-Salem State University and the University of North Carolina School of the Arts jointly support a Center for Design Innovation, which has an advanced motion-detection studio for animation and virtual-reality productions.

Forsyth Tech, the local community college, also tries to draw companies to the area, promising to provide the skills they need. To entice Caterpillar, for instance, Forsyth bought sophisticated machinery to create the simulated working environment the company wanted.

“It was a big investment for the college,” said Alan Murdock, Forsyth’s vice president for economic and work force development. Another offering is a cybersecurity training program. And Forsyth is setting up a center at a small local airport to train workers in aerospace technologies, potentially seeding a drone industry.

While Winston-Salem lacks many of the amenities Amazon was seeking, city leaders claim it has plenty of selling points: a low cost of living, a lively downtown and uncongested streets among them. The sources of venture capital are more limited than in California, but the investment goes further. And there is a greater opportunity to stand out.

At the Institute for Regenerative Medicine, researchers have created skin and cartilage, urethras and bladders. I saw an artificial heart valve, opening and closing, made from human cells. Dr. Atala hopes one day to build complex, solid organs like kidneys or livers.

“One concern I had was whether we would be able to recruit talent as well here as we could in Boston,” he said. “Truth is we can recruit better.” Twenty people joined Dr. Atala in his move to Winston-Salem. Now his institute employs some 450, heavy on Ph.D.s.

Other tech entrepreneurs have settled in Winston-Salem. David Mounts considered Atlanta and Dallas before deciding to put the headquarters for his tech services company, Inmar, in the Innovation Quarter, where 900 of its 4,500 employees work. “It is easier to create innovation consortia between businesses, academia and government in a small city that understands innovation as a team sport,” he told me. In big cities, he said, there are simply too many parties with divergent interests.

But Mr. Mounts also recognizes the challenge. Everybody has to pull together. As Mayor Allen Joines said, “We have no choice.”