For more than a century, since agriculture and whaling gave way to tourism, Cape Cod in Massachusetts has attracted vacationers to its many miles of pristine beaches. For those wary of the water after last year’s great white shark attacks, experiences on terra firma abound. There are nature walks and wine tastings, leisurely bike rides and gallery visits, lighthouse tours and shopping. The dining and cultural scenes have broadened, too. One way to narrow the scope of your weekend travels is to concentrate on the Outer Cape towns of Eastham, Wellfleet and Truro, all within the Cape Cod National Seashore, which protects tens of thousands of acres from development. With towering dunes, strong surf and pine forests, the area feels more rugged and wild than the Mid Cape and less hectic than the tourist mecca (some might say trap) of Provincetown at the very tip. And you can easily pack a weekend without so much as putting a toe in the water.

Outer Cape Cod offers many ways to lose yourself in nature. One of the best is Mass Audubon Wellfleet Bay Wildlife Sanctuary, with five miles of trails that wend through 900 acres of pine and oak woodland, salt marsh and bay shore. Explore the paths on your own, stopping first in the butterfly and hummingbird garden before heading onto Goose Pond Trail, which leads to a salt-marsh overlook, a freshwater pond dappled with lily pads, a bird blind (for serious birders), and, finally, an expansive bay beach. Entry, $8. Or sign up for one of the many programs, whether seining in the tidal creeks ($14) or a marine life cruise in Cape Cod Bay ($52).

Winemaking is more often associated with coastal areas like the North Fork on Long Island in New York. But Truro Vineyards of Cape Cod has been growing grapes and making wine for nearly 30 years. Across its five acres of vines, pearl-sized grapes like cabernet franc are plumping up in the soft, salty air. Stop by for a wine tasting ($10 per person) and a free tour. At a recent tasting, several varietals and blends were poured. They ranged from a dry riesling, and even drier cabernet franc, to selections from the “lighthouse series,” semisweet wines that come in a lighthouse-shaped bottle. “This is what we call our ‘porch pounders,’” said the young man who led the tastings, referring to the blends’ sneaky drinkability. 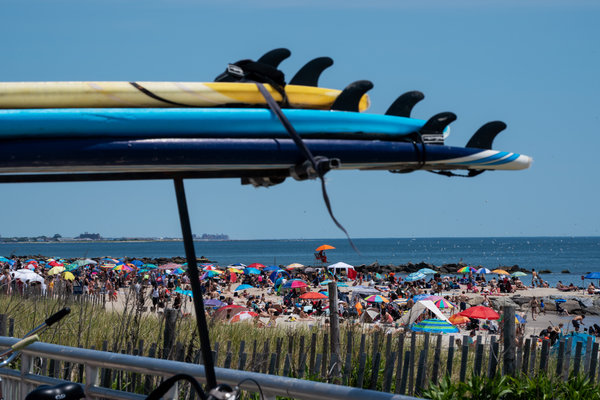 25 Writers on Their Favorite Beach Vacations 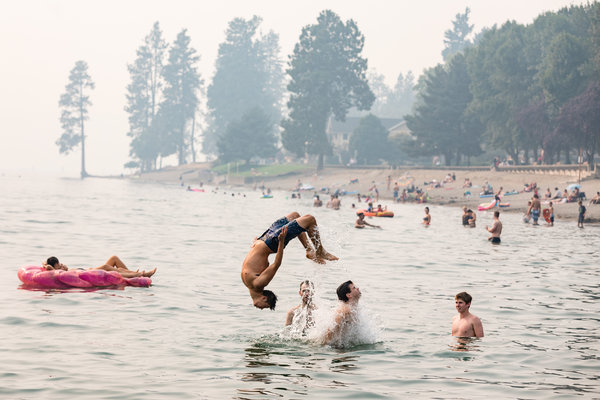 Despite the name, Mac’s Shack in Wellfleet is anything but. Ensconced in a 19th-century white-clapboard house, the restaurant — one of the Cape’s most eclectic and sophisticated — has a down-home vibe, at least on the outside. (A life-size lobsterman in a skiff adorns the roof, a tribute to a 1970s restaurant that once occupied the space.) But the menu draws inspiration from around the globe, with starters like tuna tostadas and beet poke and main courses like lobster gnocchi and seared scallops in a coconut-curry sauce. If you are craving some fried classics, you can’t go wrong with fish and chips or whole belly clams. Before you tuck into dinner, however, savor a summery cocktail like the Great White (vodka, coconut-infused rum and lime) at the outdoor bar, where oysters (Wellfleet, of course) are shucked to order. A three-course dinner for one without drinks, about $45.

Start the day with an outing on the Cape Cod Rail Trail, fashioned from a 19th-century rail line that once ran all the way to Provincetown. The 25-mile trail unfurls south from Lecount Hollow Road in Wellfleet, past marshes and ponds. Stop at the Cape Cod National Seashore’s Salt Pond Visitor Center in Eastham, where you can learn about the geological and cultural history of Cape Cod. (Fun fact: Milk on Cape Cod used to taste salty because farmers fed hay harvested from salt marshes to their cows.) From the visitor center, pick up the Nauset Bike Trail, which winds through dense stands of oak to Coast Guard Beach, where you can walk along the ocean and see seals at low tide. Bicycles are available to rent from Idle Times Bike Shop (about $20 for four hours) or Little Capistrano Bike Shop ($16 for two hours), both with locations in Wellfleet and Eastham.

At the northern end of the bike trail is PB Boulangerie Bistro, a bakery-restaurant that has been transporting Cape Codders to France since 2010. That is when Philippe Rispoli, a native of Lyon, planted his flag in Wellfleet. In the evening, diners gather around a crackling fire pit outside the rose-colored restaurant before dinner. But in the morning, it is not unusual to join a line of acolytes 50 deep, patiently waiting for a pain au chocolat, almond croissant or Kouign-amann, a buttery confection originally from Brittany.

With wind-swept shorelines and muted hues, the landscapes of the Outer Cape serve as both magnet and muse for artists. Scores of galleries dot Cape Cod’s downtowns, but Wellfleet has one of the finest clusters. Left Bank Gallery, now in its 49th year, represents 30 artists. Among them are Katie Trinkle Legge, whose whimsical oils depict vintage bathing suits, beach balls and summer fruit ($500 to $4,800). Jim Holland’s large-scale landscapes and buildings ($3,500 to $11,000) evoke Edward Hopper, who summered in Truro from the 1930s until his death in 1967. Not far away is the Frying Pan Gallery, whose owner, Steve Swain, is known for his sculptural reliefs, in particular, schools of fish crafted from plasma-cut steel. A single fish is $12; a school of seven fish, $70. Shops beckon too, from the Customs House Fine Papers & Fancy Goods to the Jewelry Studio of Wellfleet, where the owner, Jesse Mia Horowitz, and her sister, Neile, capture the shapes and colors of the Cape with sterling silver and semiprecious stones.

For some real shellfish, PJ’s Family Restaurant is a casual roadside destination churning out succulent lobster rolls, all manner of fried and grilled seafood and salads. Order from one of the windows and when your number is called, take a heaping tray to one of two dining rooms, which a recent renovation transformed from drab and dated to nautical and polished. Expect to pay about $17 for lunch.

While a dip in the ocean might not hold much appeal these days because of shark-fear, there are plenty of bay beaches and freshwater ponds for cooling off. Just down the street from Frying Pan Gallery is Mayo Beach on Wellfleet Harbor, whose calm surface is flecked with lobster buoys and pleasure boats. Park in the municipal lot and take a short path through the dune grass and bayberry to the narrow crescent beach. Besides the lapping of diminutive waves, the only sound might be the signature jingle of a nearby song sparrow.

As in most beach resorts, a number of purveyors of chocolate and fudge compete for the sweet tooths of summer. One standout is Chequessett Chocolate in North Truro. The shop makes all of its chocolate on site, from blueberry-ginger chocolate bars to rosemary caramels. It also has a small cafe with a smattering of tables where you can sip a macchiatto while nibbling a chai bonbon.

A starter kit for escaping into the world.

There is something about Moby Dick’s Restaurant that seems to distill summer to its essence. Maybe it’s the screened porch where diners dig into lobster dinners, complete with corn on the cob, while Billie Holiday or John Coltrane tunes drift on the breeze. Or maybe it’s the retired wooden boat outside that serves as a makeshift playground for children, as parents queue up for a table. (The line moves quickly.) Whatever it is, Moby Dick’s is worth a visit. The restaurant does not serve alcohol, but there are no corkage fees and the wait staff is happy to put bottles of wine on ice. Dinner for one, without wine, is about $45.

Just because you are miles from a major city does not mean you have to forgo the pleasures of a night of theater. Now in its 35th season, Wellfleet Harbor Actors Theater stages several plays and musicals each summer. This summer’s playbill includes Eugene Ionesco’s absurdist drama “Rhinoceros” (about $25 to $39 per ticket). Children’s theater and film screenings are also on the calendar.

For a quick breakfast, head to the Flying Fish, which offers indoor seating and al fresco dining on its spacious wooden deck. Order an iced coffee, along with an egg sandwich on nine-grain bread, and a “Cape Codder” scone, studded with blueberries and cranberries. If you’re lucky, the scones will still be warm. Breakfast for one, about $15.

Highland Light, Cape Cod’s oldest and tallest lighthouse, has stood on a bluff overlooking the ocean in North Truro since 1857, warning ships and fishermen with its flashing beacon. (A 1797 wooden structure commissioned by George Washington predated the lighthouse.) Because of erosion, the current brick lighthouse was moved back 450 feet from the cliff’s edge in the 1990s, an engineering feat that took more than two weeks. The kerosene lantern and Fresnel lens were replaced long ago by an electric beam. But the lighthouse still burns bright, and visitors can climb the winding stairs to the top for a panoramic view. Entry, $6.

There is an active rental market in Outer Cape Cod, with private rooms available by the night or week, as well as one-room cottages and large waterfront houses. Airbnb listings start from about $115 a night for a single room.

The Wagner at Duck Creek hotel (70 Main Street, Wellfleet; thewagneratduckcreek.com) has 27 comfortable rooms in three buildings. Some rooms look across a moderately busy road to a marsh. Doubles start at $190; continental breakfast is included.

Camping is a more affordable option. Maurice’s Campground (80 Route 6, Wellfleet 508-349-2029; mauricescampground.com) has a range of accommodations, including cabins starting at $115 a night and sites for tents, R.V.s and trailers. Tent sites begin at $45 a night.