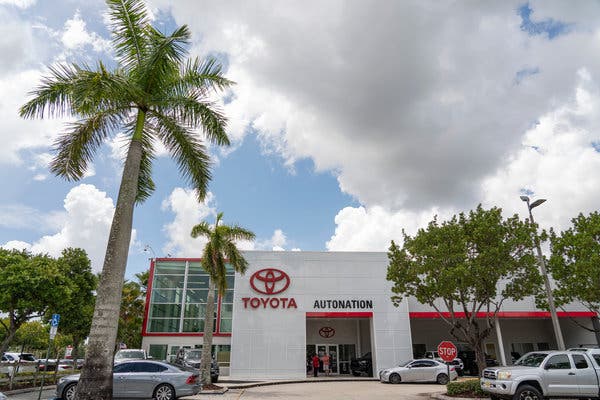 Over the past decade, the auto industry enjoyed a boom unlike any other in modern history.

Sales of new cars and trucks rose steadily from 2009 to 2016, the longest growth streak since at least before the Great Depression. Millions of Americans traded up to bigger and more sophisticated vehicles decked out in leather and outfitted with gee-whiz electronics and safety features.

But sales to individual buyers are now falling. Even once popular sport utility vehicles and pickup trucks are sitting on dealer lots for longer stretches.

Car dealers around the country said that the upgrade cycle they rode to rich profits in recent years appears to be ending and that they are seeing fewer buyers despite offering discounts and other incentives. So, dealers say they are ordering fewer vehicles from manufacturers.

“We are turning down cars and are being more picky on the cars we stock,” said Brian Benstock, general manager of Paragon Honda in New York City. “We just can’t take more. We’re full.”

A slowdown in auto sales could weigh on the United States economy. The auto industry is the largest manufacturing sector and makes up about 3 percent of gross domestic product. Automakers, parts manufacturers and dealers directly employ more than two million people. Car companies spend billions of dollars every year on research and development.

When he was running for president in 2016, Donald Trump promised to increase auto manufacturing jobs. If sales continue to decline, forcing automakers to reduce jobs, the industry’s health could become an issue in the 2020 campaign, especially in swing states like Michigan, Ohio, Pennsylvania and Wisconsin.

Consumer purchases, which are known as retail sales, fell 3.5 percent in the first half of the year to their lowest six-month total since the first half of 2013, according to J.D. Power and Associates. Such sales are considered a more accurate measure of demand than total sales, which include purchases by fleet operators like car rental companies.

AlixPartners, a consulting firm with a large automotive practice, estimates that sales will drop more than 2 percent in 2019, to 16.9 million vehicles. The firm expects the industry to sell 16.3 million vehicles next year and 15.1 million in 2021.

New car sales have been slumping in many of the world’s major auto markets. In China, sales were down more than 12 percent in the first six months of the year.

In the United States, after many years of strong sales, many consumers are driving vehicles that don’t need to be replaced. Newer cars and trucks tend to be more durable and hold up longer than cars made even a decade or two earlier.

At the same time, the average price of new vehicles has risen to around $35,000, while interest rates on auto loans have edged higher. That means people have to be willing and able to spend more to buy a new car than they were just a few years ago.

The slump in car sales has already forced some companies to cut production and jobs. General Motors recently stopped making cars at a plant in Lordstown, Ohio, that made the Chevrolet Cruze and is winding down manufacturing at another factory in Detroit. Honda recently ended a shift at its plant in Marysville, Ohio, that makes its Accord sedan and other models.

What is perhaps most worrying for the industry is that sales of larger vehicles — S.U.V.s and trucks — that had more than made up for a recent collapse in purchases of sedans, are showing signs of strain.

Earlier this year, Nissan eliminated a production shift at its truck plant in Mississippi. Dealers are also sitting on more inventory than they were a year ago.

Yet many manufacturers are running truck and S.U.V. plants at full speed. G.M. has five plants running three shifts a day, and Ford has four. Fiat Chrysler has two truck plants operating 20 hours a day, six days a week — close to its maximum capacity.

Mark Wakefield, a managing director at AlixPartners, said automakers have organized their plants in ways that allows them to adjust production more easily than a decade ago when sales plunged and G.M. and Chrysler sought bankruptcy protection. Still, he said, if sales continue to be weak, other manufacturers may start to idle truck and S.U.V. plants. “First for a week or two at a time,” Mr. Wakefield said, “and if inventories don’t come back in line, they my say, ‘O.K., maybe we do need to take a shift out.’”

Dealers aren’t waiting. In Jackson, Mich., 75 miles west of Detroit, Wes Lutz has cut inventory at his Chrysler Dodge Jeep dealership by more than 40 percent. Until the spring, he had been stocking new vehicles worth about $12 million. “Now I’m at $7 million,” he said.

And he’s ordering fewer vehicles each month because even sales of once-hot models like the Jeep Wrangler have slowed. His store is still holding nine 2018 Wranglers, has plenty of 2019 models and 2020 versions will be arriving soon. “Last year I couldn’t get enough Wranglers,” Mr. Lutz said.

On Tuesday, AutoNation said it too has been paring inventory for the last three months, and now has 64,000 new vehicles in stock, 9,000 fewer than a year ago. The company has been limiting orders to top-selling models and cutting back on vehicles that tend to languish for weeks or months and often need to be heavily discounted or sold at a loss.

With more than 325 franchises, AutoNation is considered an industry bellwether and other dealers often follow its lead.

Mr. Jackson said he’s hopeful that monetary policymakers will soon lower interest rates, giving auto sales a jolt. “There’s every indication that the Federal Reserve is going to begin to reduce rates,” he said. “If that happens, it is going to be very beneficial to customers.”

But Doug Waikem, who manages six family-owned dealerships in Massillon, Ohio, isn’t counting on sales bouncing back. He’s tightening inventory and focusing more on getting customers to keep coming back whether they are buying cars or not.

“We’re doing free carwashes, service contracts, financing — the things that keep customers connected to us,” he said. After such a long period of growth in a cyclical industry, he added, “We know we’re headed for a recession.”