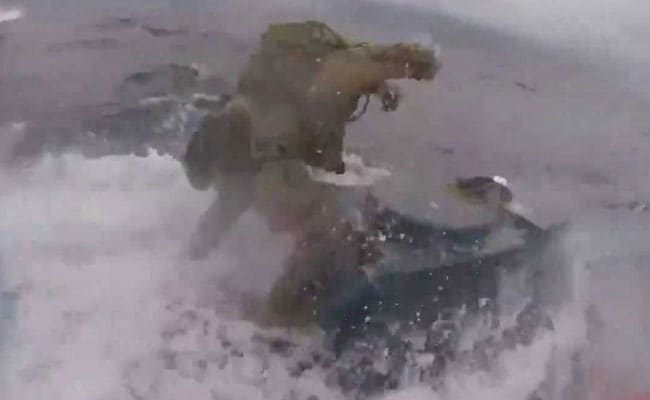 The semisubmersible filled with thousands of pounds of cocaine tore through deep Pacific waters, ultimately bound for the United States, tracked by a Coast Guard surveillance aircraft.

Infamously elusive boats dubbed narco-submarines – cartel-funded ships built in the jungle to haul massive amounts of drugs – have bedeviled Coast Guardsmen tasked with stemming the flow of contraband. Most are never spotted.

But on June 18, there was a positive hit on a narco-submarine hundreds of miles off the Colombian and Ecuadoran coast in waters patrolled by the U.S. Coast Guard Cutter Munro. The ship deployed a boarding team on two small boats with a helicopter watching overhead.

Guardsmen, trained in boarding ships, wore helmet camera videos recording the moment they ran down the vessel. “Stop your boat! Now!” one roars in Spanish as waves crash against the hull. “That’s going to be hard to get on,” he says. The boarders wore holstered pistols and night-vision goggles to prepare to peer inside the dark hull.

Three Guardsmen slip off the side of their boat onto the 40-foot narco-sub as one boarder pounds on the hatch with his fist. Then, a suspected trafficker emerges and puts his hands up as the Coast Guardsmen scream commands. Then the video ends.

Inside was more than 17,000 pounds of cocaine, estimated to be worth $232 million, said Lt. Commander Stephen Brickey, a spokesman for U.S. Coast Guard Pacific Area.

“They’re like the White Whale,” Brickey told The Washington Post on Thursday, describing narco-subs. “They’re pretty rare. For us to get one, it’s a significant event.” The Pacific region monitored by the Coast Guard is about the size of the continental U.S., Brickey said, likening the mission to a pair of police cars patrolling the country.

Brickey said patrols may encounter a narco-sub once a year or so. Boarding them can be “hairy,” he said – smugglers can be armed, and when caught, they typically open a valve to quickly fill the vessel with water, sending all the drugs and evidence to the ocean floor.

Boarders have one to two minutes to assess whether they are on a drug-laced vessel about to sink, Brickey said.

This particular semisubmersible – a ship partially submerged that cannot fully dive like a submarine – was sunk by the Coast Guard, Brickey said. The alleged smugglers were taken for prosecution by the DEA.

The haul from the June seizure was set to be offloaded Thursday during an event with Vice President Mike Pence in attendance, part of 14 separate seizures of drugs worth a combined $569 million, the Coast Guard said. The seizures occurred off the coasts of Mexico, Central America and South America.

About 80% of drugs that enter the U.S. come from the Pacific corridor, Brickey said, and authorities stop about 11% of semisubmersibles. In 2009, The Washington Post reported that more than a third of Colombian cocaine that ultimately arrived in the U.S. was smuggled into submersibles bound for Central America and Mexico.