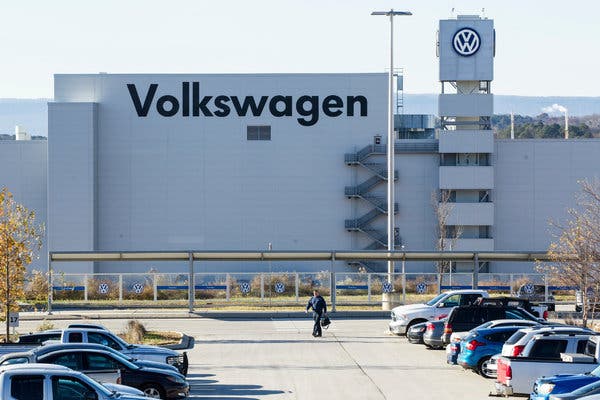 In the latest defeat for organized labor in the South, workers at a Volkswagen plant in Tennessee rejected an effort to form a union this week.

Of the roughly 1,600 workers who voted, slightly more than half opposed the unionization effort, according to results released late Friday. The United Automobile Workers has been trying to organize the factory, in Chattanooga, for years, recording a narrow defeat in 2014.

“Our employees have spoken,” the plant’s chief executive, Frank Fischer, said in a statement. “We look forward to continuing our close cooperation with elected officials and business leaders in Tennessee.”

Labor leaders have long focused on the South, which they consider important to securing victories for workers around the country. The possibility that a business or its competitors might move production to sparsely unionized states like Tennessee can put pressure on workers elsewhere to accept lower pay and make other concessions.

Wages for Volkswagen production workers in Chattanooga start at $15.50 per hour, which will increase to $16 in July. The plant’s top wage of $23.50 is well above the median in Chattanooga, but roughly 20 percent below what experienced workers can make at unionized plants of automakers like General Motors and Ford. No major foreign automakers have unionized plants in the United States.

The loss highlighted the difficulty of organizing private-sector workers in a political environment that is overtly hostile to labor unions, even as workers have won gains through collective action elsewhere. Tennessee’s Republican governor, Bill Lee, who formerly ran a contracting company, opposed the U.A.W. campaign because, he said, the presence of a union would make it harder for the state to attract other businesses.

Mr. Lee visited the plant and spoke to workers about his objections.

Wilma Liebman, a chairwoman of the National Labor Relations Board under President Barack Obama, said she had never heard of a governor’s appearing directly before workers to lobby them to vote against union representation. Mr. Lee’s office did not respond to requests for comment.

State Representative Robin Smith, a Republican whose district includes the plant, had said a decision to unionize could threaten tens of millions of dollars in future state incentives for the company.

“It’s much easier to defend incentives, the use of tax dollars, when they’re going into an investment that follows our state’s philosophy,” Ms. Smith said in an interview.

Pressure from politicians has been a recurring feature of organizing campaigns in the South. Opposition from Gov. Phil Bryant of Mississippi helped defeat a U.A.W. organizing campaign at a Nissan plant in 2017, and the antagonism of Gov. Nikki Haley appeared to have a similar effect at Boeing’s South Carolina plant in 2015, leading the union to call off a vote.

The U.A.W. also blamed its 2014 defeat at the Volkswagen plant on the aggressive opposition of local politicians. Bob Corker, a senator at the time, said a union would make the company less competitive and indicated that executives would add a production line at the plant only if workers voted down a union.

Volkswagen also changed its stand toward the union after that campaign. In 2014, the company proclaimed itself neutral and even appeared to encourage the organizing effort. It considered union representation a way to create a “works council,” a common feature in Germany through which workers and management collaborate on issues like factory rules and schedules. Almost all of the company’s other plants worldwide are unionized.

This time around, Volkswagen was also officially neutral, but its posture was much more resistant. The company’s election website informed workers that “we prefer to continue our direct relationship with you, working together as one team” — the kind of language companies often use to indicate opposition to a union.

“It’s definitely different,” said Matt Sexton, a Volkswagen worker who was also involved in the organizing effort this year. “There’s not any neutrality at all.” He said that, unlike last time, supervisors had made anti-union comments in meetings, and that organizers had not been allowed to campaign inside the plant.

The publication Labor Notes obtained a recording of a recent all-hands meeting in which Mr. Fischer, the chief executive, appeared to blame a union for the demise of a Volkswagen plant in Pennsylvania in the 1980s.

Mr. Fischer recalled that production at the Pennsylvania plant had started in the first half of 1978 and that by October of that year, there was a strike. “Volkswagen management never was able to really run the plant until it was closed in 1988,” he said on the recording.

In 2015, a small group of maintenance employees at the Chattanooga plant voted to unionize, but Volkswagen refused to bargain with them, leading to litigation.

When the U.A.W. filed for an election with the National Labor Relations Board this year, the company objected on the grounds that the case involving that smaller union was still pending, forcing the union to resubmit its petition for a vote after it withdrew the earlier case.

Workers and organizers also took a more conventional approach this time around, emphasizing the benefits of a union on issues like safety and scheduling.

“In 2014, there was a strong focus on how unionization was a necessary legal precondition for implementing VW’s ‘co-determination’ management system,” said Daniel Cornfield, a sociologist who studies labor at Vanderbilt University in Nashville. “In 2019, the pro-union campaign is much more focused on traditional U.S. organizing issues.”

Mr. Sexton said he and other workers were becoming increasingly upset because production teams were understaffed, leading to greater stress on workers and more injuries. He said the plant’s medical team was often unsympathetic, pronouncing injuries the result of “pre-existing conditions” and sending workers back to the line.

He also said management often scheduled overtime shortly before the end of a shift, in violation of Volkswagen’s own policies.

Mr. Fischer, who was the plant’s chief executive until 2014 and returned this spring, said in the recording that he was focused on correcting some of these issues, such as overtime practices.

The company said that its injury rates were well below industry averages, and that workers who were evaluated at the on-site medical clinic were allowed go back to work only when they were medically cleared. It said it had reduced overtime in recent years to make scheduling more predictable, and now required that overtime not be canceled if it was called.

Keri Menendez, a worker who was active in the effort to oppose the union, acknowledged that morale had deteriorated somewhat in the last few years. But she said that she was generally pleased with her pay and benefits, and that having a union could disrupt the open-door relationship she had with her supervisors.

“I’m not a person who believes the grass is always greener on the other side,” Ms. Menendez said.