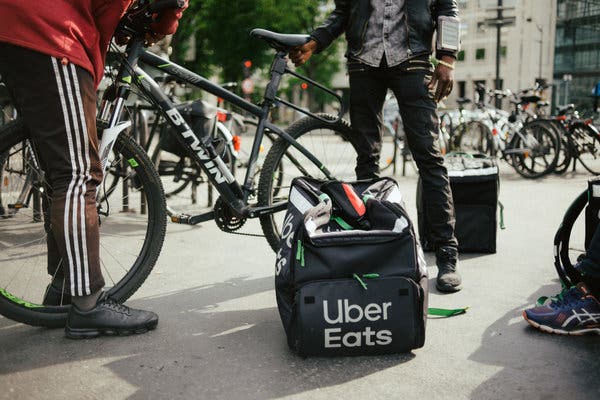 PARIS — Aymen Arfaoui strapped on a plastic Uber Eats bag and checked his cellphone for the fastest bicycle route before pedaling into the stream of cars circling the Place de la République. Time was money, and Mr. Arfaoui, a nervous 18-year-old migrant, needed cash.

“I’m doing this because I have to eat,” he said, locking in a course that could save him a few minutes on his first delivery of the day. “It’s better than stealing or begging on the street.”

Mr. Arfaoui has no working papers, and he would pocket a little more than half that day’s earnings. He said that he owed the rest to a French bicycle courier who considered Uber Eats’ terms too cheap — 3.50 euros (just under $4) per order plus a bit for mileage — to do the work himself.

The Parisian courier had outsourced the job illicitly to Mr. Arfaoui, who had been living in an abandoned car for a month after arriving from Tunisia. The migrant teenager said that he earned €17 that day for four hours of work.

Food delivery has become a multibillion-euro business as the American ride-hailing giant Uber, the London-based delivery platform Deliveroo and ambitious rivals battle to capture markets and consumers. But competition has squeezed pay for couriers, prompting some to take advantage of the most desperate of job seekers.

In France, where food delivery is a booming trend, some couriers who are registered on such apps are renting out their accounts. The substitute cyclists are often illegal migrants, asylum seekers and underage teenagers willing to work long hours for low wages, no matter the traffic or weather, according to French labor and humanitarian groups, some companies, and interviews with more than a dozen of riders and migrants.

The couriers broker such deals on the street or through chats on Facebook, WhatsApp and Telegram, and take a 30 to 50 percent cut of earnings. Many of the riders and migrants spoke on the condition of anonymity given the nature of the work.

So far, the activity has unfolded on a small scale among the 20,000 or so food delivery couriers in France. Companies have dropped scores of riders found doing black market deals. But businesses and regulators are facing fresh complaints of another sign of exploitation in the gig economy.

“These jobs have become more precarious,” said Jean-Daniel Zamor, president of the Independent Deliverymen’s Collective in Paris, a group that works on labor issues for couriers. “The fact that there is less money from the platforms has pushed poor people to outsource to people even poorer than them.”

Uber Eats and competitors including Stuart, a French app, and Glovo, based in Spain, said they were aware of misconduct. “We’re concerned because these are illegal practices in which people are profiting from the vulnerability of others,” said Nicolas Breuil, global marketing manager for Stuart.

The labor inspector in Nantes, one of France’s largest cities, has opened an inquiry. Stuart and Deliveroo said they had talked with French government ministries to track and prevent possible abuse.

Deliveroo said in a statement that it had “a zero-tolerance approach on this matter” and took it “extremely seriously, including fully investigating any concerns that may arise.”

Alexandre Fitussi, Glovo’s general director in France, said couriers who turned to undocumented people had created their own system of exploitation. “It’s a big problem,” he said, adding that at least 5 percent of its 1,200 weekly deliverers had been found to be in France illegally.

Conditions are ripe in other European countries for similar exploitation of illegal migrants and asylum seekers, and the problem has been reported in Britain and Spain.

Until recently, food delivery services were scarcely seen in France, where sit-down meals are a cultural totem. That shifted in 2015 when Deliveroo began offering food off menus from bistros and fast-food restaurants. Uber Eats and other delivery apps followed.

The platforms attracted thousands of workers, especially from France’s high-unemployment suburbs as well as students. But couriers who spoke with The New York Times now say that companies are recruiting more riders and that pay is getting worse. Couriers are required to apply as independent contractors so the companies can avoid expenses and taxes associated with full-time work.

Deliveroo faced strikes in France after changing its pay rate in 2017 from a fixed hourly rate plus commission to a flat €5 to €5.75 per delivery. Uber Eats riders held limited strikes during last year’s World Cup soccer tournament to protest what they said were poor wages and working conditions.

The companies dispute the claims about pay getting worse.

Couriers said in interviews that the official rates didn’t always reflect what they took home. They described a system in which pay by the food delivery platforms had fallen by 25 percent or more in the last several years, creating incentives to outsource.

Although the companies talk up their social responsibility policies, they still profit no matter who makes the deliveries, they said.

“Every year we earn less, we deliver less,” said Florent, a rider in his mid-20s who agreed to be identified by only his first name. “They change conditions by cutting wages or changing payment rules.”

Florent said he had worked for three food delivery apps and now leased his identity on each app to undocumented workers for a 30 percent cut of their wages. Florent was contacted by The Times via Facebook, which he and others use to hawk their accounts.

Youssef El Farissi, 18, based in Avignon, said he had leased his Uber Eats account to a dozen undocumented workers in the last month. Six of his friends were doing the same with various platforms.

“If it was better paid, everyone would stay on their own account and work,” he said.

As migrants continue to flee Africa and the Middle East, France has a growing population of asylum seekers who can’t be employed while the government reviews their cases. Migrants interviewed by The Times for this article said that they needed work, and that riding a bike, even on precarious terms, was better than more nefarious ways of making money like selling drugs.

French labor law allows independent contractors to outsource to legal workers, but Uber Eats, Stuart and Glovo said they prohibited subcontracting. Deliveroo said that its riders could subcontract to people with working papers and that it conducted spot checks and data searches of couriers. “Should a rider subcontract to an individual without right to work, we would end their contract immediately,” the company said.

Uber Eats said it did not tolerate illegal or underage work and had 100 employees in France performing spot checks. Glovo tracks riding time to identify suspicious behavior. Stuart conducts regular inspections and said it uncovered at least a dozen illegal substitutes a month.

Mr. Arafoui, the young migrant, said he had few alternatives. Leaving a troubled economy in Tunisia, he boarded a boat in September with hundreds of other people sailing from Libya. He landed in Italy, he said, and hid in trains headed to France. He may apply for asylum.

“I met a guy who rented me his Uber Eats account for €100 a week,” the soft-spoken, willowy teenager said. He said he worked up to 13 hours a day, clearing about €200 a week.

Mr. Arafoui’s dream is to work as a fishmonger. “It’s a less dangerous job than this one, where you have to deliver right away and hurry to the next place,” he said. But that would require working papers that he did not yet have.

“Being a takeaway rider is easier,” he added. “Nobody checks your identity, and you can find an account very quickly.”