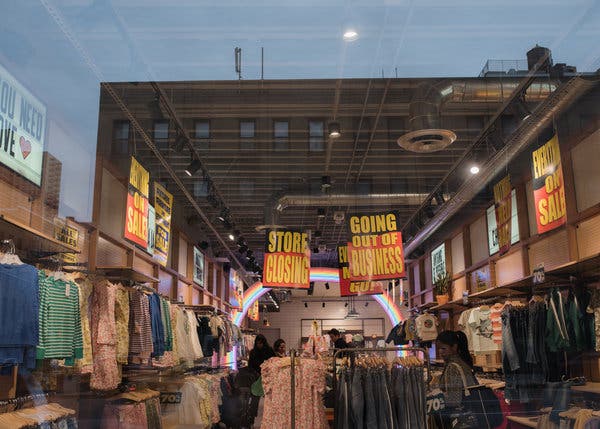 Already battered by the e-commerce revolution, traditional retail stores are bracing for another blow — new tariffs on $300 billion worth of Chinese imports that the Trump administration is threatening to impose.

Retailers and analysts warn the impact will be disastrous for an industry already tormented by vacant storefronts and deserted malls. The reason: Unlike earlier tariffs that mostly targeted industrial and commercial products, the next round is aimed squarely at consumer goods like footwear, toys and apparel.

Even for healthy chains, like Walmart and Costco, the new duties threaten the business formula that helped speed their rapid rise over the last few decades: Import cheap products from Asia and sell them at rock-bottom prices. The National Retail Federation estimates that China supplies 42 percent of all apparel, 73 percent of household appliances and 88 percent of toys sold in the United States.

The government has already imposed tariffs on $250 billion worth of Chinese goods. President Trump has said he will decide on whether to impose duties on the remaining $300 billion in imports but hasn’t set a firm deadline.

Mr. Trump’s trade representative will begin hearings on those proposed tariffs on Monday.

“The threat of tariffs couldn’t come at a worse time,” said Mark A. Cohen, a former Sears executive who is now director of retail studies at Columbia Business School. “It’s a squeeze that can’t be forecast or predicted.”

With profit margins of 5 to 10 percent, Mr. Cohen said, sellers of apparel and accessories don’t have much room to maneuver. Adding to the challenge, these chains are preparing orders for the make-or-break holiday season.

In a letter last month, over 170 shoemakers and retailers called on Mr. Trump to halt the trade war with China, which supplies almost 70 percent of shoes sold in the United States.

The industry cannot easily return shoe production to the United States, because labor costs are much higher here and there is little capacity for new production, said Matt Priest, chief executive of the Footwear Distributors and Retailers of America. Even New Balance, which manufactures sneakers domestically, imports some material from China.

“I do think it’s catastrophic,” Mr. Priest said. “We are in the middle of right-sizing retail here in the U.S., with fewer brick-and-mortar stores.”

The impact will be greater on traditional retailers because they can’t adjust prices as quickly as online retailers, Mr. Cohen said. “This is going to cause more stores to close and more people to lose their jobs,” he added.

So far in 2019, American retailers have announced plans to shut more than 7,000 stores, after announcing nearly 6,000 closings last year, according to Coresight Research. Those numbers include liquidations of chains like Payless ShoeSource and Gymboree and store closings by healthier companies like Gap Inc. and Victoria’s Secret.

By the end of 2019, announced closings could climb to 12,000 stores, Coresight estimated.

The tariffs could also hurt the broader economy at a time when recession worries have moved to the forefront. The retail sector has shed 50,000 jobs since January.

Torsten Slok, chief economist at Deutsche Bank, estimated that if the duties did take effect and remained in place, they would add 0.4 percent to the inflation rate and reduce economic growth by the same amount over the next year.

“That may not sound like much, but consumer spending equals 70 percent of G.D.P.,” he added. “It’s Economics 101 that as prices rise, people will spend less.”

Mr. Trump could delay the tariffs as negotiations continue — a tactic he used in February after initial progress in the talks with China. But the uncertainty is weighing heavily on companies, said Simeon Siegel, a senior retail analyst at Nomura Instinet.

“My price targets are supposed to be 12-month targets, and now they’re 12-tweet targets,” Mr. Siegel said. He added that the new 25 percent tariff could have a “cataclysmic” effect on retailers, especially those that are already in pain.

Brian Goldner, chief executive of Hasbro, said the tariffs would be a setback for the toy industry just as it had begun to recover from the liquidation of Toys ‘R’ Us last year.

Hasbro, which makes toys and games like Play-Doh and Monopoly, said that it agreed to join other companies in testifying about the tariffs at a separate hearing the trade representative is expected to hold in coming weeks. About two-thirds of the toys it sells domestically come from China, although it has been expanding production elsewhere in recent years, including in the United States.

Still, China remains crucial — as a supplier and customer. Hasbro’s Transformers and My Little Pony offerings are popular there. “We want to continue to enable the China marketplace to be open to American brands that are beloved globally,” Mr. Goldner said in an interview.

Many companies declined to discuss the tariffs, fearful of being on the receiving end of a presidential Twitter post or other unwanted publicity. But on recent calls with investors and analysts after earnings announcements, tariffs were a hot topic.

Many executives seemed hopeful that the duties would not come to pass even as they described their efforts to mitigate the damage: leaving China, negotiating with vendors and figuring out new pricing strategies.

Five Below, a chain that targets teens and tweens with merchandise that costs $5 or less, said that it was already grappling with the administration’s decision last month to raise tariffs on certain Chinese products to 25 percent from 10 percent.

The retailer, which sells pool floats, phone chargers, beach towels and more at roughly 800 stores, said that it would raise prices on certain $1 to $4 items and even test higher prices like $5.25 and $5.55 in some stores this summer.

“Increasing prices beyond the $5 price point is a decision we do not take lightly,” Joel D. Anderson, the company’s chief executive, told analysts this month.

While the chain would be affected by the new round of tariffs that cover apparel and toys, Mr. Anderson said, “it’s too early to speculate as we assume there’s going to be lots of exceptions,” similar to earlier tariffs.

Other retailers also emphasized how difficult it was to predict the Trump administration’s course.

“It’s still a very fluid situation right now,” Michelle Gass, Kohl’s chief executive, said of the proposed tariffs on a recent call. Art Peck, the chief executive of Gap Inc., said there was “significant uncertainty around what goods the tariffs may apply to and at what level they may be applied.”

“The stock market isn’t pricing in the entire impact yet,” Jay Sole, an analyst at UBS, said of share prices of retail companies. “Stock prices would fall further if this takes place because earnings for some companies would be much lower.”

Walmart, the nation’s largest chain as well as its biggest private sector employer, faces a broader challenge. Over all, only one-third of the goods it sells come from outside the United States. But China has been a principal source for many items like clothing and electronics that it and other big-box retailers sell, enabling them to drive prices down.

As China grew into its position as the world’s workshop, Walmart prospered with it, said Richard Vedder, emeritus professor of economics at Ohio University and the author of “The Walmart Revolution: How Big-Box Stores Benefit Consumers, Workers and the Economy.”

The relationship dates back to the days of Sam Walton, Walmart’s founder. “Walton and his successors looked at China as a source of low-cost goods and wanted to be aggressive in exploiting that opportunity,” Mr. Vedder said.

Now, those prices might not be so low, according to the company’s chief financial officer, M. Brett Biggs. “Increased tariffs will lead to increased prices, we believe, for our customers,” he said on a call with reporters last month.

Retailers have mounted a furious lobbying campaign in Washington as the deadline nears.

“We are at a critical juncture for the retail industry, as companies evolve to meet the expectations of customers,” said Matthew Shay, president and chief executive of the National Retail Federation. “The imposition of tariffs just creates a further headwind in an already challenging environment.”