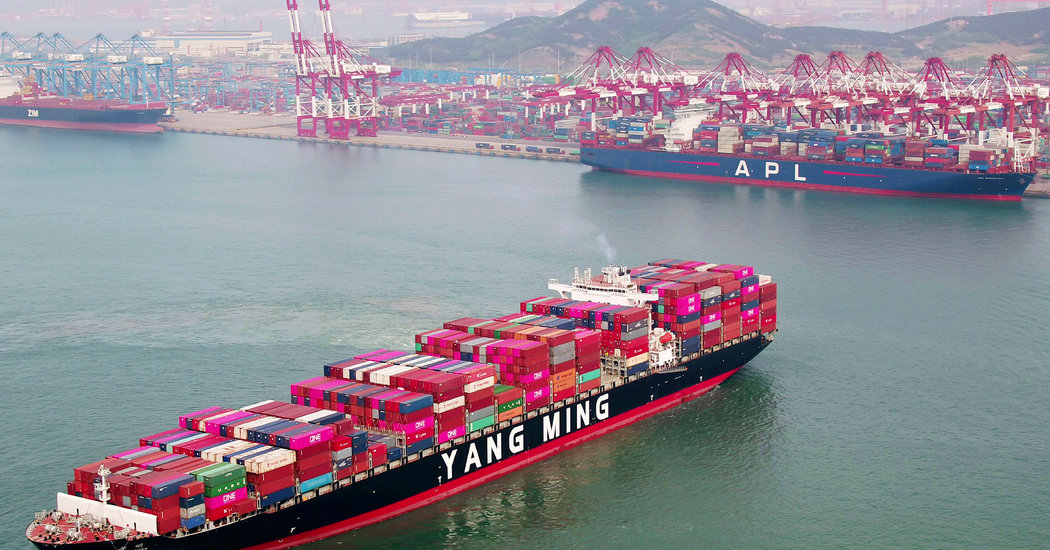 WASHINGTON — President Trump on Wednesday played down the importance of securing a trade deal with China as he prepared to meet with its president, Xi Jinping, saying he was ready to proceed with additional tariffs if negotiations between the countries failed to get back on track.

Mr. Trump said it was “possible” that a deal could ultimately be reached and that China was eager for an agreement. But he said he was prepared to impose tariffs on another $300 billion worth of Chinese products, on top of the 25 percent tax already in place on $250 billion of Chinese imports. Mr. Trump also indicated he might limit the next round of tariffs to just 10 percent.

“My attitude is I’m very happy either way,” he added.

Mr. Trump and Mr. Xi are scheduled to discuss the trade tensions on Saturday at the Group of 20 summit in Osaka, Japan. But while both the United States and China are feeling the burden of a bruising trade war, there appears to be little chance of a quick resolution to an economic conflict that has beaten down companies and consumers on both sides of the Pacific.

In many ways, the ability to strike a deal has gotten harder since talks collapsed in early May, when steady progress toward a trade agreement halted after China rejected America’s demand that the deal be codified in Chinese law. The United States accused China of reneging on previous promises, and both sides have since hardened their positions.

Mr. Trump said in the interview on Wednesday that a deal with China was “90 percent” done before talks collapsed, and that the United States would insist on the same provisions that were previously agreed to, including protections on American intellectual property and measures to open the Chinese market to foreign companies.

In addition to preparing to impose tariffs on more Chinese goods, the United States has increased pressure by trying to cut the telecommunications firm Huawei and other Chinese companies off from American components in an effort to severely damage their ability to operate.

China has responded by imposing its own higher tariffs on goods from the United States. Beijing has also said it would draw up its own blacklist of American companies that it viewed as “unreliable,” a move meant to retaliate against the United States for cutting Chinese companies off from American technology.

There is incentive in both the United States and China to get the negotiations back on track. The United States economy is at risk as a result of the trade war, and the Federal Reserve has cited uncertainty surrounding trade policy as a reason it may cut interest rates. Stock markets have rallied and plummeted in turn with the president’s remarks on China.

The tariffs have also hurt the Chinese economy, piling on to the effects of a sharp but temporary credit crunch last year. Mr. Trump’s current tariffs extend to roughly 2 percent of China’s economic output. Consumer confidence is weak, and growth in industrial production has slowed to a crawl.

After pausing talks for several weeks, both sides have once again resumed negotiations. Mr. Trump hosted a call with Mr. Xi last week, while Treasury Secretary Steven Mnuchin and Robert Lighthizer, the top trade negotiator, spoke to their counterpart, Liu He, China’s vice premier, on Monday.

On Wednesday, Mr. Trump defended his use of tariffs, saying they had forced Mexico to capitulate on a deal on immigration and were causing companies to leave China, at great cost to the Chinese economy. He said the United States was “taking in a fortune” because of his levies and again claimed that China was bearing the full burden of the tariffs, not the United States, an idea that economists have disputed.

“Don’t let anyone tell you that we’re paying,” the president said. “We’re not paying; China’s paying for it.”

Mr. Trump said the tariffs were causing some companies to do “what they should really be doing” — move their operations from China to the United States — but lamented that some companies had chosen to move to Vietnam instead.

When asked if he wanted to put tariffs on Vietnam, the president said that the two countries were in discussions, but that Vietnam was “almost the single worst abuser of everybody.”

Mr. Trump also disparaged Europe for placing trade barriers on American products and treating the United States “worse than China.” And he sharply criticized a contender to take over leadership of the European Commission, saying that Margrethe Vestager, currently the bloc’s top antitrust regulator, had unfairly targeted Google, Apple and other American companies.

“She’s suing all our companies,” said Mr. Trump, who did not mention Ms. Vestager by name. “They make it very — almost impossible to do two-way business.”

“She hates the United States, perhaps worse than any person I’ve ever met,” he said.

Ms. Vestager, who is from Denmark, is now running for president of the European Commission, the bloc’s executive branch. The president is chosen by leaders of the countries inside the European Union and approved by the European Parliament. Ms. Vestager has said it is overdue that a woman lead.

A spokeswoman said she declined to respond to Mr. Trump’s remarks.

Ms. Vestager’s antitrust office has been one of the world’s most aggressive regulators of the global tech industry. She has ordered Apple to pay 13 billion euros (nearly $15 billion) in unpaid taxes, and fined Google more than €8 billion combined for three separate antitrust violations. Her office initiated another investigation of Amazon that is continuing.

While her focus on American tech companies has drawn criticism from American officials, including past remarks by Mr. Trump, Ms. Vestager has said the actions are the result of the power and anticompetitive behavior of the companies, not because of the country where the firms are based.

If Ms. Vestager does win the presidency, that could set the United States and Europe up for an even more contentious relationship in the months ahead. On May 17, the president announced that he would grant Europe and Japan a six-month reprieve from auto tariffs as the United States seeks to negotiate trade deals with both governments.

But the United States and Europe have disagreed over which products and industries should be included in the pact, and they appear to have made little progress toward an agreement.

Europe has continued to push ahead with other trade pacts. On June 30, it will sign a free-trade agreement with Vietnam in Hanoi that the European Commission on Tuesday called “the most ambitious free trade deal ever concluded with a developing country.”