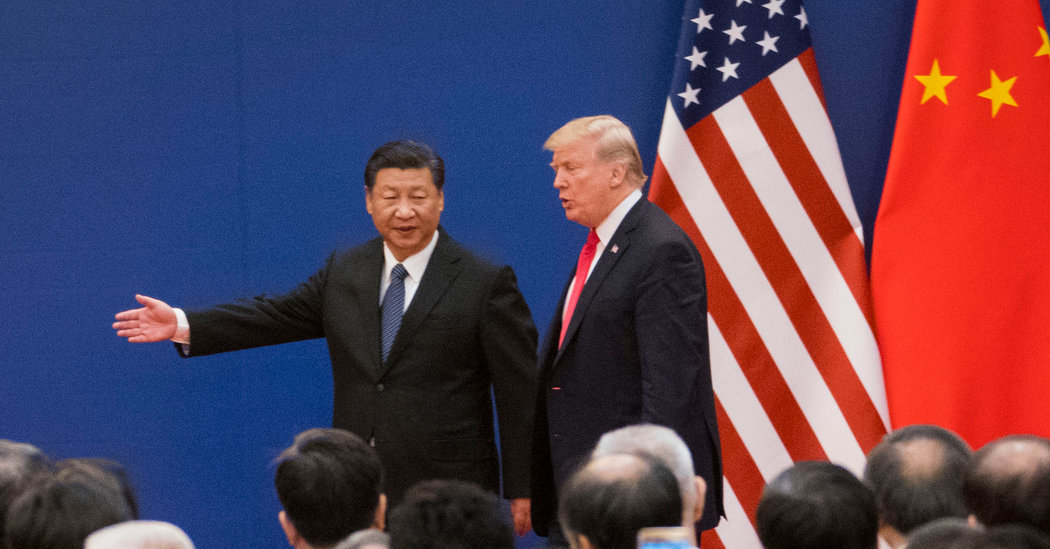 WASHINGTON — President Trump said on Tuesday that he and President Xi Jinping of China had spoken by phone and would have an “extended” meeting at the Group of 20 meeting next week in Osaka, Japan.

His comments were the first confirmation that the two leaders would actually meet after trade talks between the United States and China stalled in May and suggested that the two countries were once again trying to find compromise.

“Had a very good telephone conversation with President Xi of China,” Mr. Trump said on Twitter. “We will be having an extended meeting next week at the G-20 in Japan. Our respective teams will begin talks prior to our meeting.”

Had a very good telephone conversation with President Xi of China. We will be having an extended meeting next week at the G-20 in Japan. Our respective teams will begin talks prior to our meeting.

Stocks jumped after the president’s tweet, as skittish investors took comfort in the potential for renewed discussions between the world’s two largest economies. The S&P 500 rose more than 1 percent shortly after the start of trading on Wall Street, led by technology and industrial shares, which have been weighed down by the trade war over the last year.

“You look at the rally, the stock market, I think the market says talk is better than no talk,” Larry Kudlow, the president’s top economic adviser, told reporters in the White House driveway Tuesday.

Mr. Kudlow said he did not “want to speculate” on whether China would come back to the table substantively or whether the talks amounted to a reset. But he said the United States would continue to insist that China make structural changes to its economy.

“The two leaders will talk. That’s all I know,” Mr. Kudlow said.

Speaking to reporters Tuesday, the president said he had a very good relationship with Mr. Xi and that the countries had “a very good chance” of reaching a deal.

“We’ll see what happens,” Mr. Trump said. “The meeting might very well go well and frankly our teams are starting to deal, as of tomorrow. China wants to make a deal.”

Progress toward a trade agreement between the world’s two largest economies had come to a halt after Mr. Trump accused China of breaking a deal with the United States and China accused the United States of failing to negotiate in good faith.

Trump officials said the Chinese government altered portions of the agreement that would require them to codify the trade deal’s provisions in Chinese law, which the United States saw as evidence that China would not keep its side of the bargain.

That prompted Mr. Trump to escalate his fight with China, raising tariffs on $200 billion worth of Chinese goods as punishment and threatening to tax an additional $300 billion worth of goods if Beijing does not agree to America’s trade terms.

On Capitol Hill on Thursday, Robert Lighthizer, the administration’s top trade negotiator, told lawmakers that no decision had been made about the next round of tariffs against China. Mr. Lighthizer defended the president’s tough tactics before Republican and Democratic senators, who raised concerns about the trade war’s effects on American farmers, manufacturers and consumers.

“We had an untenable situation with China, one that should have been addressed frankly a couple of decades ago,” Mr. Lighthizer, the United States trade representative, told the Senate Finance Committee. “We view ourselves as having the most serious problem you can face in the trade space.”

A meeting between Mr. Trump and Mr. Xi, along with their deputies, suggests the two countries are again seeking a path forward on a trade agreement that would open Chinese markets, strengthen its protections for intellectual property and result in purchases of American products.

The White House, in a statement, said Mr. Trump and Mr. Xi had discussed the importance of a “fair and reciprocal economic relationship” in their phone call on Tuesday, including “addressing structural barriers to trade with China and achieving meaningful reforms that are enforceable and verifiable.” The two presidents also discussed regional security issues, the statement said.

In an article posted late Tuesday on the website of China Central Television, the state broadcaster, Mr. Xi said he stressed to Mr. Trump “that the two countries should resolve economic and trade issues through dialogue on even ground, and the key is to accommodate each other’s reasonable concerns. We also hope that the U.S. will treat Chinese companies fairly.”

“I agree that the economic and trade teams of the two countries should maintain communication on how to resolve differences,” Mr. Xi said, according to the article.

It is far from guaranteed that a deal will be reached quickly, if at all. The two sides remain far apart on several issues, including how many of Mr. Trump’s tariffs on roughly $250 billion of Chinese products will come off and whether the trade agreement must be codified in Chinese law.

But both leaders are under economic pressure to come to an agreement. American tariffs have taken a toll on the exports that help power the Chinese economy, raising pressure on Chinese leaders to persuade the Trump administration to come to a truce. Mr. Trump also faces pressure from American lawmakers and businesses, including the manufacturers and retailers who import parts and finished products from abroad, and American farmers and other exporters who have been hurt by retaliatory tariffs from China.

On Tuesday, senators in both parties argued that Mr. Trump’s trade war was inflicting real damage on their constituents, and appealed to Mr. Lighthizer to help soften the blow by ensuring that certain products would be exempt from the president’s 25 percent tariffs.

“Having an exclusion process in place that is usable for these manufacturers who are being harmed, and in some cases harmed greatly, needs to be addressed,” said Senator John Thune of South Dakota, the No. 2 Senate Republican. “There are so many of these unintended consequences, I think, of some of the trade policies that are in place right now.”

The United States has exempted certain products from previous rounds of tariffs, but it is unclear whether any exclusions will be granted if the next $300 billion goes into effect. On Monday, dozens of executives from toymakers, clothing companies, port operators and telecom providers came to Washington to testify in the first of seven days of hearings about how the next round would affect them.

Almost all of the company officials testifying said they supported the administration’s attempts to reach a more level playing field with China on trade, and a few argued for more protection for their industry.

Daniel Nation, the director of government relations for Parkdale Mills, testified Monday that textile and apparel products should be included on the administration’s tariff lists, to “help redirect trade in this sector to the Western Hemisphere.”

But most executives at the hearing protested the tariffs. Companies that make lingerie, toys, cribs and other products in China testified that the 25 percent tariffs would raise costs for consumers and disrupt supply chains, and could force them to lay off employees or close.

Hun Quach, the vice president for international trade at the Retail Industry Leaders Association, which represents big retail stores like Walmart and Costco, said she would testify this week against having retailers and consumers bear the brunt of the trade war.

At the Senate hearing Tuesday, Mr. Lighthizer conceded under questioning that tariffs alone might not necessarily change China’s behavior, but described them as the only tool at the Trump administration’s disposal to pressure the Chinese.

“I don’t know if it will get them to stop cheating,” Mr. Lighthizer said. “If we don’t get an agreement, then we have to do something, and if there’s a better idea than tariffs, I’d like to hear it. I haven’t heard it.”

Pressed on whether Mr. Trump would impose the next round of tariffs, Mr. Lighthizer demurred. “I don’t even know if we’re going to have the tariffs — it’s entirely up to the president,” he said.