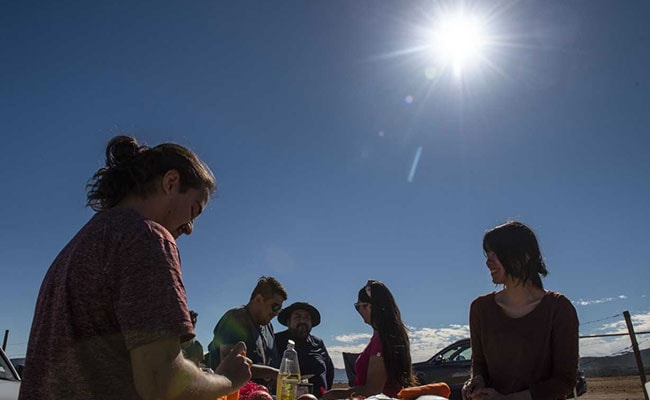 The countdown is finally over. On Tuesday, day will become night along a stretch of the South Pacific, Chile and Argentina as a rare “total solar eclipse” plunges the landscape into darkness.

Most of the 6,800-mile path is over the open ocean, where the moon will extinguish sunlight for a whopping four minutes, 33 seconds. By the time the shadow makes landfall on the Chilean coast, the duration of totality will be trimmed by a full two minutes.

The show begins at 3:22 p.m. local time in Chile, when viewers will notice a dark silhouette nicking the bottom-left corner of the sun. The bite taken out of the solar disk will progressively expand upward as totality looms closer.

By 4 p.m., the sun will be halfway extinguished, but it’s not until about 4:20 p.m. – when only a sneaky crescent remains – that noticeable changes in ambient light will occur. The light will take on a curious, almost indescribable hue, becoming a tad dimmer and seeming to become subtly different in color. Shadows will sharpen as the sun shrinks to a sliver, hanging low in the late afternoon sky.

At 4:35 p.m., a curtain of violet and deep azure will emerge over the western horizon, then a shroud of darkness will approach overhead. Bizarre “shadow bands” – like the waves of light found on the bottom of a swimming pool – will whisper across the ground, delicately at first, but becoming more obvious as the ambient light decreases.

In Chile and Argentina, the moon’s shadow will sweep in at speeds topping 6,000 mph – much faster than the “Great American Eclipse” in 2017. That means the premature nightfall will be faster; the transition from day to night could take as little as 30 seconds. And then? Totality.

The swiftly moving shadow will scream across South America in just four minutes coast-to-coast, plunging below the horizon as the sun sets near Buenos Aires. While the potential for cloudy skies characteristic of southern hemisphere winters sparked initial concerns, Tuesday’s forecast looks to be purely stellar.

Models originally prognosticated that a wave of low pressure would throw a deck of cloud cover over the coastline. The sun hovering just above the water could easily be blotted out by stubborn coastal overcast. But forecasts favor sunshine in most of the Chilean zone of totality, even though dropping temperatures instigated by the eclipse could build clouds near the water. Otherwise, the forecast is virtually ideal.

Dan Satterfield, chief meteorologist at WBOC-TV in Salisbury, Maryland, will be on hand in La Higuera, Chile, on Tuesday to experience totality.

“I’m a bit worried clouds may flirt with the coast in northern stretches of the path,” Satterfield said, “but otherwise this is looking really good.”

The forecast is equally optimistic across Argentina, where the sky promises to be largely clear – save for a few thin, wispy clouds carried in by the jet stream. In fact, a wafer-thin veil might actually boost the eclipse experience, serving as a subtle backdrop upon which the moon’s 90-mile-wide shadow may fall. That would make it easier to see the umbra sweeping in from the ground.

After totality, partial phases of the eclipse will last from just before to until sunset across most of South America. Partial phases won’t be visible north of Guatemala in Central America, leaving the United States waiting until its turn in 2024.

Chileans find themselves at ground zero for total eclipses three times this decade – once in 2010, again Tuesday and a third time on Dec. 14, 2020. An annular or “ring of fire” eclipse also occurred in 2017.