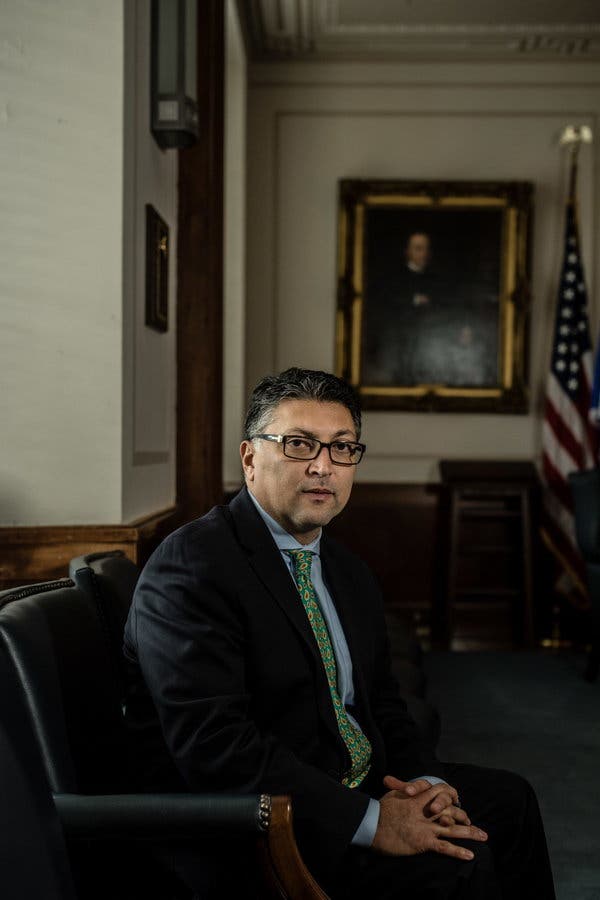 SAN FRANCISCO — When Americans fear the future, they turn to antitrust action.

It happened in the 1890s, when the United States was rapidly moving from a farming economy to an industrialized one. It happened again in the late 1940s, when nuclear war seemed imminent. And it is happening now, as big technology companies work on artificial intelligence that threatens to create a world where human beings are eternal losers.

“There’s an old saying about how history doesn’t repeat itself but it rhymes, and we’re definitely in a rhyming mode,” said Edward T. O’Donnell, a historian at College of the Holy Cross in Massachusetts. “Our worries about our technological future are sending us back to solutions in our industrial past.”

For decades, antitrust regulation has been overwhelmingly focused on the welfare of the consumer. No cost to the consumer, no problem. That opened the door for Google, Facebook, Apple and Amazon — which offered digital services that were cheap or free — to become immensely profitable and powerful.

Now a backlash is mounting as renegade scholars try to reverse years of established doctrine that they say does not appropriately take the clout of those companies into account. Economic absolutism is making way for other considerations as antitrust thinking goes back to its roots.

“People might enjoy using the tech platforms but they are also asking, What kind of society do we want?” said Hal Singer, a senior fellow at George Washington University’s Institute of Public Policy. “We’re at one of those antitrust moments.”

The change in antitrust thinking has recently gathered momentum. This month, American regulators indicated they were looking at Big Tech, inspiring a rush of “about time” remarks from politicians across the spectrum. Since then, President Trump, House speaker Nancy Pelosi and House Judiciary chair Jerrold Nadler have all endorsed in their own ways a heightened scrutiny of the tech behemoths.

Makan Delrahim, the Justice Department official in charge of antitrust, recently gave a speech in Israel in which he upped the stakes by rejecting the consumer welfare standard as the sole determinant of harm. He went so far as to assert that “diminished quality” can harm competition, which could send regulators into some novel areas.

Mr. Delrahim concluded by saying the antitrust division “is working hard to stay true” to the original vision of John Sherman, the Ohio senator whose name is on the 1890 antitrust act that was the first legislation against monopolies.

The Sherman Antitrust Act was passed in the Senate by a 51-to-1 vote, while the House endorsed it unanimously. It was two pages long, did not bother defining the word “monopoly” and was used in its first decade mostly to go after labor. Some historians think the conservative Congress that passed it was merely being cynical, offering a sop to reformers.

The fear of the future, however, was real as the economy transformed itself. In 1890, the percentage of the population in agriculture was at 43 percent, down from 72 percent in 1820. The steel companies, meatpackers and railroads hired and then hired some more. The number of millionaires rose from a few hundred before the Civil War to about 4,000 in 1890, historians estimate. .

“The rising fear of the day was that honest, hardworking people are being screwed and the system is rigged,” said Mr. O’Donnell, author of “Henry George and the Crisis of Inequality: Progress and Poverty in the Gilded Age.” People grew to depend on big companies like Standard Oil, just as their descendants today cannot sign off from Facebook and Google. But they did not necessarily like them.

“Nearly every household had a five-gallon red can of Standard Oil’s kerosene,” Mr. O’Donnell said. “But the founder, John D. Rockefeller, was often seen as rapacious octopus.”

In 1900, the Democratic Party platform included the belief that “private monopolies are indefensible and intolerable,” declaring: “Unless their insatiate greed is checked, all wealth will be aggregated in a few hands and the Republic destroyed.”

Groundbreaking reforms followed, including the breakup of Standard Oil. In 1913, in a largely forgotten episode, National Cash Register Co. became the first tech company to be successfully prosecuted for violating the Sherman Act. Nearly 30 executives at the company, which controlled 95 percent of the cash register market, were convicted and sentenced to brief prison terms. While they appealed and never served a day, the company’s power was broken.

Antitrust moves ebbed and flowed through the 20th century. In the late 1940s, said Daniel Crane, an antitrust historian at the University of Michigan, “there was quite a bit of alarm about the growing tide of industrial concentration following the war, and fear that undue levels of concentration could bring fascism or communism to power.”

By the mid-1950s, Americans had reconciled themselves to working for large corporations but antitrust remained a potent force.

“Anybody who knows anything about the conduct of American business knows that the managers of the large corporations do their business with one eye constantly cast over their shoulders at the antitrust division,” the historian Richard Hofstadter wrote in 1964.

One of the most controversial cases of that era is now enjoying a resurgence: Brown Shoe Co. Inc. v United States.

The case began in 1956 when Brown Shoe, a manufacturer and retailer, merged with G.R. Kinney Co., which also made and sold shoes to customers. The government sued, saying the merger would increase concentration in the manufacturing and selling of shoes, eliminate a major competitor and deprive other shoe companies of a fair opportunity to compete. The government won the case in the district court and then, in 1962, at the Supreme Court.

The case could give Amazon, Facebook, Google and Apple nightmares. The reason: The way that regulators defined unhealthy concentration in a market. At the time, Brown Shoe and Kinney together owned only 7.2 percent of the country’s retail shoe stores, and shoe stores were by no means the only place to buy shoes. The closest the merged company got to a monopoly was in six cities, where it sold over 40 percent of children’s shoes.

Google, by contrast, has 92 percent of the worldwide search market today, while Facebook has 70 percent of the social media market and Amazon about 38 percent of the e-commerce market in the United States, according to research firms. (Antitrust arguments against Apple are less about market share and more about how it treats competitors in its App Store.)

Brown Shoe’s argument that the shoe industry was “dynamically competitive” did not sway minds. Chief Justice Earl Warren wrote that “the protection of viable, small, locally owned businesses” was a priority, even if “occasional higher costs and prices” might be the result.

Brown Shoe is a “foundational antitrust decision even though it embodies values that have fundamentally shifted,” C. Paul Rogers III, a professor at SMU School of Law, wrote last year in the SMU Law Review.

In an interview, he said, “The court was very concerned about trends toward concentration and growth by acquisition. It ignored efficiency arguments, saying efficiency gains could actually be a negative because they can squeeze out the small guys.” He added that he thought the case was wrongly decided on its facts, “but if that populist approach comes back, it would be scary to these very efficient high-tech behemoths.”

If the populists gain more momentum, they have a ways to go to unseat the antitrust establishment, which still hews to the consumer welfare standard developed by Robert Bork, the influential legal scholar and judge, and scholars at the University of Chicago beginning in the 1970s.

Some experts, like Mr. Singer of George Washington University, are waiting to see how sincere regulators are in their newfound zeal — and where exactly they plan to go. Mr. Delrahim of the Justice Department mentioned in his speech some unusual applications of antitrust, including “privacy protections” and “free speech on platforms.”

Mr. Singer said that last was a nod to President Trump, who has said he and some of his supporters have been unfairly treated on social media. As for privacy, “I am very skeptical that more competition is going to make the platforms less exploitative of user data,” he said. “Their whole reason for existing is to exploit user data.”

At least for the moment, however, the reformers are ascendant and the economists defensive.

“The American people designed antimonopoly law so anyone can understand the rules,” said Barry Lynn, the executive director of Open Markets, a Washington think-tank that has advocated antitrust reform. “Enforcers followed guidelines that limited industrial firms to 25 percent of any market. To enforce the law, in other words, all you had to do was be able to count to four. We don’t need economists to help us count to four.”

Even if the reformers decisively win, the arguments will doubtless continue. The truest thing ever said about antitrust was by Robert Pitofsky, the chairman of the Federal Trade Commission in the late 1990s.

“Merger enforcement in the United States,” he said, “has often been erratic and always controversial.”