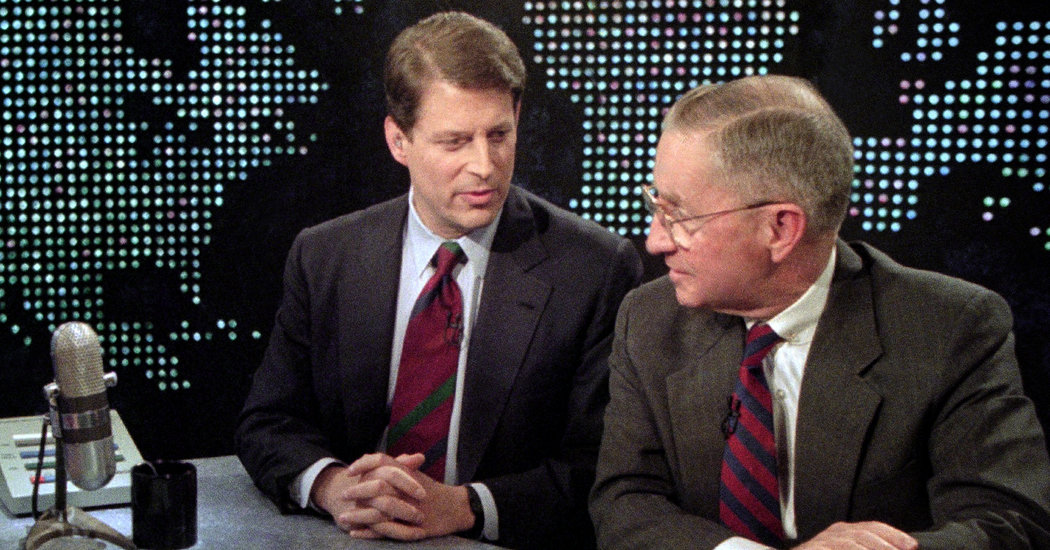 Ross Perot, who died Tuesday, has not been much in the news in the past few years. But his ideas surely have. His staunch opposition to the North American Free Trade Agreement in the 1990s found a powerful echo two decades later when Donald Trump ran for the presidency calling for a wall on the Mexican border and dismissing Nafta as “perhaps the worst trade deal ever made.”

“We do the world’s dumbest trade agreements,” Mr. Perot told Vice President Al Gore in a televised debate in 1993. “You go back to the agreements we’ve done all over the world, you’d be amazed that adults did them.” Mr. Perot’s call for using tariffs, not Nafta, to force Mexico to improve its workers’ standard of living is not unlike President Trump’s attempt to use tariffs to force Mexicans to stop migrants seeking to come to the United States.

Many of Mr. Perot’s predictions about Nafta’s impact — notably his claim of the “giant sucking sound” Americans would hear as businesses shuttered operations in the United States — proved either wrong or overstated. Paradoxically, however, his skepticism about lowering trade barriers has proved prescient.

Some industries indeed relocated operations to Mexico or added new capacity there following Nafta. Mexico added many manufacturing jobs in the first several years after the deal. But in the five years after Nafta came into force in 1994, manufacturing employment in the United States increased, too, by 800,000. Many got their jobs from a surge in exports from the United States to Mexico.

One study by economists at the generally pro-trade Peterson Institute for International Economics estimated that a 10 percent increase in employment at a Mexican affiliate of an American company led to a 1.3 percent increase in its American jobs, as well as a rise in United States exports and spending on research and development.

Consider the automotive industry, the sector that most deeply integrated its production facilities across North America to take advantage of Mexico’s cheaper labor and the United States’ technological capabilities. “By producing cheaper automotive parts and components on the ‘near shore’ in Mexico rather than truly ‘offshore,’ Mexican automotive plants helped sustain a competitive automotive industry across North America,” the Center for Automotive Research noted in a 2016 study of Nafta’s impact.

Still, many of the promises and visions of Nafta proponents fell short, as Mr. Perot had warned.

“If we keep shifting our manufacturing jobs across the border and around the world and deindustrializing our country, we will not be able to defend this great country, and that is a risk we will never take.”

Mr. Gore’s assertion that “we cut down on illegal immigration,” as Nafta created better jobs in Mexico, sits uneasily alongside the fact that by the end of the Clinton administration in 2000 there were 4.5 million unauthorized immigrants from Mexico living in the United States, up from two million a decade earlier.

The prediction from Clinton administration officials that Nafta could vault Mexico into the select group of developed economies — an aspiration shared on the other side of the border too — never really came to pass.

Perhaps the most resonant of Mr. Perot’s observations, however, had to do with the broader impact of trade on American workers. “If we keep shifting our manufacturing jobs across the border and around the world and deindustrializing our country, we will not be able to defend this great country, and that is a risk we will never take,” he said.

Lawrence Katz, a Harvard economist who as chief economist for the Labor Department helped prepare Mr. Gore for the debate, said Mr. Perot’s case was overstated. Not that many workers were displaced by trade at the time, the economy was creating other middle-income jobs, and those displaced had opportunities to bounce back.

What Mr. Perot said might not have been true then, but it is now, Mr. Katz said: “On substance, he was well ahead of his time.”

The “sucking sound” from Mexico was never really heard, but there certainly was one from China after it entered the World Trade Organization in 2001 — a move supported by the Clinton and Bush administrations. And the jobs the labor market is creating tend to be in the service sectors toward the bottom of the pay scale.

Research has found that the trade shock from China imposed much more significant and lasting costs on workers in some industries, devastating entire communities.

In one study, published just after Mr. Trump entered the presidential race in 2015, a group of economists estimated that rising Chinese imports from 1999 to 2011 cost up to 2.4 million American jobs. Another analysis concluded that American workers in many industries and communities never recovered — bumped into lesser-paid jobs.

Mr. Katz said things might have played out differently if Nafta had been accompanied by an agreement between businesses and unions securing more rights for workers, along with a safety net to cope with economic dislocations. “I think it was a lost opportunity,” he said.

A quarter-century later, the anxieties over trade that Mr. Perot channeled are again dominating the political agenda.

“Working people all across the United States are extremely angry,” he told Mr. Gore. “There is no way to stop ’em. They are not going to tolerate having their jobs continued to be shipped all over the world.”

By the time of the debate, Mr. Perot had made one of his two presidential runs. Another businessman later sought the White House more successfully, with much the same critique.