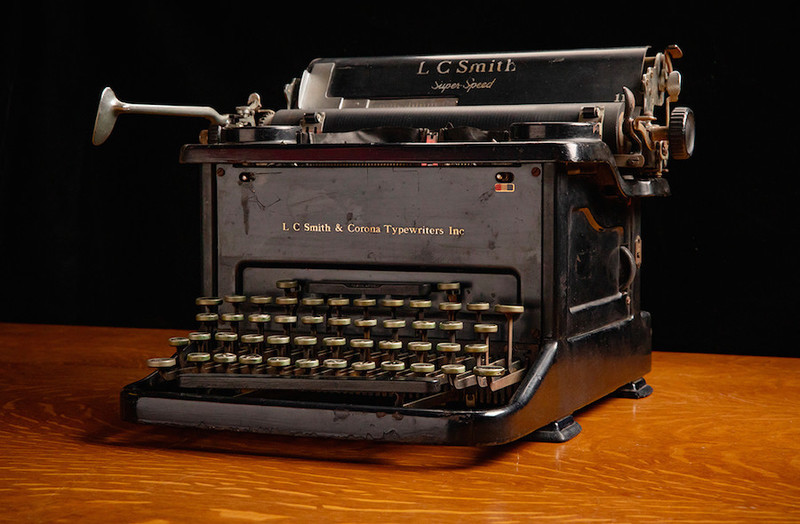 Roger Ebert‘s typewriter is currently on display at the University of Illinois at Urbana-Champaign, as part of the Rare Book & Manuscript Library exhibit, “Writers & Their Tools: Parchment-Paper-Processors.” It features many typewriters previously belonging to literary giants and trailblazing journalists, some of whom are among the college’s most influential alumni. In addition to Ebert, past students represented in the exhibit include Playboy founder Hugh Hefner, whose Underwood Standard Portable typewriter is also on display, along with those owned by Lincoln biographer Carl Sandburg and From Here to Eternity author James Jones. Ebert, Sandburg and Jones all went on to have their work published in Playboy.

Ebert’s widow, Chaz Ebert, says, “Roger loved typewriters and had several of them, even when he switched over to writing on computers. He would have been delighted to see the typewriters of the other sons of Illinois on display.“

According to the Illinois News Bureau, the library owns the typewriters that belonged to Sandburg and Jones, and those that belonged to Hefner and Ebert are on loan to the library. Hefner’s typewriter was sold at auction in December, along with other personal items, and the purchaser of the typewriter, Mark Pepitone, agreed to loan it to the Rare Book & Manuscript Library for the exhibit. The Hefner display includes the warranty card for the typewriter on which Hefner wrote his name and Urbana address, a copy of Shaft, the campus humor publication for which he wrote, and the first issue of Playboy. Hefner used the typewriter to write articles for both publications.

Sandburg used his Corona Silent typewriter to write the articles that were later published together as a collection titled Home Front Memo. The exhibit includes a copy of the collection signed by Sandburg, manuscript pages that include notes on the title page design and changes to be made, a photo of Sandburg at the typewriter and a visor that belonged to him. Along with two of Jones’ typewriters, one of which is electric, the exhibit includes a manuscript of his novel From Here to Eternity and a copy of A Soldier’s Daughter Never Cries, his daughter’s semi-autobiographical account of the family’s time living in Paris. The Ebert materials include the issue of The Daily Illini with Ebert’s first byline and the first issue for which he was editor-in-chief.

“Roger Ebert served as a champion for film as an art form as well as film criticism as its own form of art in conversation with cinema,” said curator Ruthann E. Miller, during her opening remarks at the exhibit’s opening on June 17th. “His Pulitzer Prize-winning criticism engaged movies on their own terms and in relation to their own goals. He expanded the purposes and goals of film criticism itself, enhancing its deep connections to cinema and the people who love it.”

The Rare Book & Manuscript Library exhibit, “Writers & Their Tools: Parchment-Paper-Processors,” runs though Friday, August 30th, at the University of Illinois at Urbana-Champaign. For more info, including visiting hours, click here.