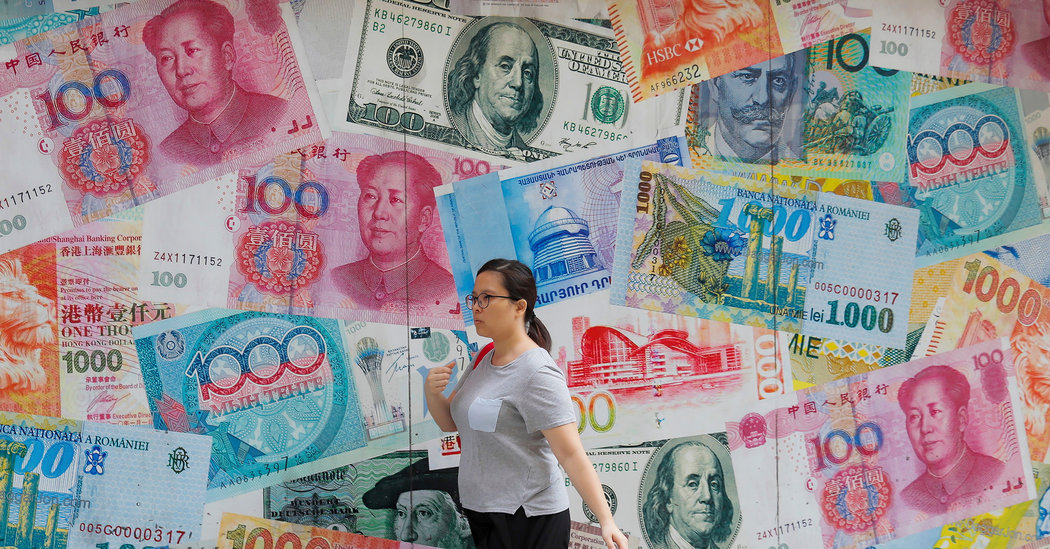 When the United States declared China a currency manipulator on Monday, long-building trade tensions between the world’s two largest economies spread to the combustible realm of currencies — with potentially huge consequences for the global financial system should the escalation continue.

On Wednesday there was just such an escalation. Central banks in India, New Zealand and Thailand cut interest rates, aiming to protect their economies from the fallout of the trade and currency war. And bad numbers on industrial production in Germany heightened fears of a recession in Europe. Money flooded into safe assets, especially United States Treasury bonds.

But the wave of worry around the world has its roots in the increasingly fraught relationship between China and the United States.

Did China allow the value of the renminbi to fall against the dollar simply so it would better match the nation’s economic situation, as the country’s leaders and many international economists argue? Or was it, as President Trump contends, an effort to give Chinese exporters an unfair advantage in trade? If a factory in China makes furniture, for instance, a fall in the renminbi against the dollar gives it an advantage in selling to the United States.

That clash reflects Mr. Trump’s rejection of the consensus of global economic policymakers, which says countries should be free to set monetary policies aimed at generating sustained growth, even if that causes their currency to depreciate. There’s also a general agreement that nations should be free to manage their exchange rates so long as they keep them broadly in line with their economic fundamentals.

The conflict also reflects the president’s singular focus on reducing trade deficits, which he has argued make the United States a loser in the global trade system. But waging a currency war could come at a big cost.

“I worry it further undermines the international framework that has supported decades of faster growth,” said Kristin Forbes, an economist at M.I.T. and a former official of the United States Treasury and the Bank of England. “Exchange rates are the shock absorber in the global economy.” When a nation enters a recession, for example, its currency tends to fall, which helps its export industries and can help lessen the severity of the recession or create a pathway out of it.

There have been international strains over currency valuations for years, all the more so in a world in which all the major economies are coping with sluggish growth. But the newest currency frictions are different.

Up until now, countries have been focused on stimulating their domestic economies. In particular, central banks have cut interest rates and taken other steps to pump money into their financial systems, actions that tend to lower the value of their currency. After all, investing in a currency with lower interest rates is less attractive, all else equal, than in one with higher rates.

But the conventional wisdom among international economists is that this doesn’t count as currency manipulation. It’s not a game in which one country’s win means another’s loss. Lower interest rates should generate more economic activity, which makes the whole world better off.

The Trump administration has introduced a zero-sum approach to global currency policy — envisioning a loser for every winner — that violates the spirit of those rules.

In that sense, the latest moves risk upsetting a relatively stable order, creating unpredictable ripple effects. When currencies swing wildly, entire economic sectors can be crushed even in powerful nations if those sectors find themselves uncompetitive after a swing in global exchange rates.

And it could undermine the central role the United States has played in the international financial system, especially if the accusations of manipulation are followed up with concrete retaliation to try to artificially depress the value of the dollar.

“The dollar being the primary global currency has enormous benefits for the U.S., but with the side effect that when the U.S. tries to depreciate, there are limits on how much it can do that,” said Adam Posen, president of the Peterson Institute for International Economics. “But if the U.S. abuses its privilege too much by bullying, there will eventually be a switch.”

The decision to name China a currency manipulator does not, in and of itself, do much. But it could be followed up with pressure on the International Monetary Fund and other nations to make similar findings and lean on the Chinese to adjust their policies. Or it could lead to direct intervention in foreign exchange markets by the United States Treasury.

This is not the first time President Trump has accused a major trading partner of using currency policy to mistreat the United States.

He assailed the European Central Bank for moving toward monetary stimulus in June — complaining on Twitter that the resulting drop in the value of the euro was “making it unfairly easier for them to compete against the USA.”

The European Central Bank explained its stimulus as an effort to keep Europe from sliding back into recession. When the central bank first undertook its “quantitative easing” policies, it was with encouragement from the Obama administration, which believed a stronger European economy was ultimately good for the United States economy, despite its effect on currencies.

Similarly, the Trump administration’s decision Monday to name China a currency manipulator — for allowing the value of its currency to fall — does not align with how mainstream economists view China’s move.

With the economy slowing in China, in part because of the trade wars, market forces tend to push its currency lower. But the People’s Bank of China has defended the currency from big drops, aiming to prevent capital from flowing out of the country or destabilizing the world economy.

The “manipulation” that took place Monday morning wasn’t artificially depressing the Chinese currency to seize advantage with trade partners, but engaging in less manipulation in order to allow it to fall closer to its market-determined rate.

There is a more nuanced case to be made against Chinese currency policy — that it did intervene for years to push down the value of its currency, ending in the early 2010s, and that Chinese economic might was built on an unfair practice. But the Trump administration’s announcement focuses on the more recent actions, in which different economic rationales apply.

There is also a paradox for President Trump. Because of the dollar’s unique role as the global reserve currency, when panic sets in overseas, money tends to flow into United States Treasury bonds, which are viewed as the safest assets on earth. But that movement tends to prop up the value of the dollar and push overseas currencies lower.

In other words, the more chaos he injects into the global economy by trying to pressure China, Europe and others not to depreciate their currencies, the more upward pressure there will be on the dollar, undermining those efforts.

That is potentially the worst of both worlds. When the dollar rises on currency markets because the United States economy is booming, it may be hard on American export industries, but at least it takes place in the context of strong growth.

But for the dollar to surge because of a global economic troubles, it means exporters suffer at the same time that the overall economy is under pressure. A particularly extreme example of this happened in the fall of 2008, when the United States economy was in free fall and yet the dollar rose because of the global financial crisis.

A habit of the Trump administration has been to link seemingly unrelated items in its dealings with other countries — using tariff threats to try to influence Mexican immigration policy, for example.

If the Trump administration continues down the path of using currency policy to try to bludgeon China over trade, technology and national security issues, it will signal a remarkable expansion into a policy area that has been a source of stability in recent decades.

“It’s dangerous to start a currency war because you don’t know where it will end,” said Eric Winograd, chief United States economist at AllianceBernstein. “We’ve seen with the trade war that it started in one place, and ended up much broader. There’s every risk a currency war will do the same.”