Seating seven comfortably within a four-metre footprint is a packaging challenge not to be scoffed at. Renault’s Triber not only manages this well, it’s also sophisticated, well built and comes with some clever features. Here is our first impression.

A sub-four-metre seven-seater built on a ‘lightly modified’ version of the Kwid’s CMF-A platform? I must confess, I wasn’t expecting much when news of the Triber first broke. It seemed like a bit of a long shot. How much better than a Datsun Go+ could it be? Four metres, after all, are four metres . . . that extra space has to come from somewhere. What was Renault going to do – give it an upright WagonR-like stance and use the vertical space cleverly? It would have to. But that would make it look like a telephone box on wheels, wouldn’t it? Questions, question, questions. 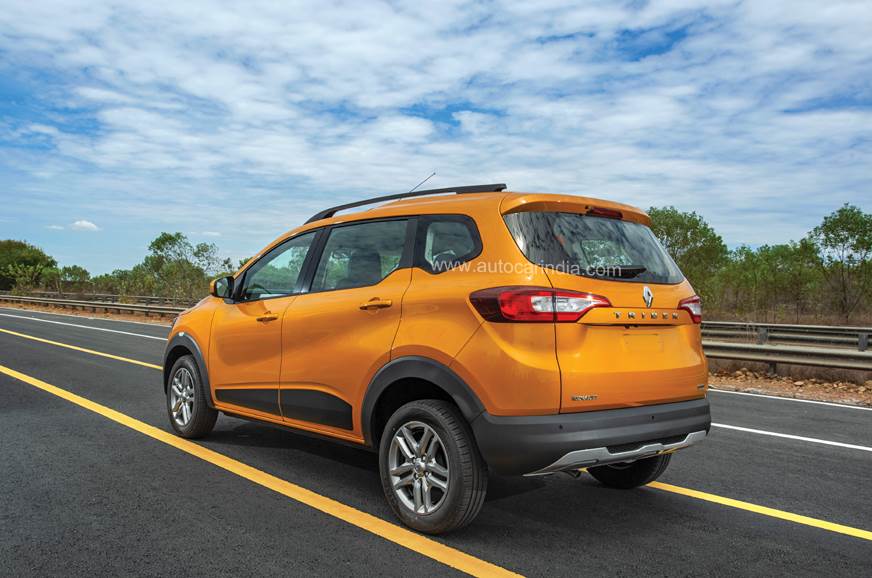 Renault has used plenty of visual tricks to make the profile exciting.

Seeing the car for the first time, as a result, comes as a huge surprise. The sweeping lines, the sophisticated SUV-like nose, the wrap-around rear windscreen; it looks super. Painted in a shade of ripe Alphonso, and sitting in the soft light on an overcast Chennai morning, the Triber is also replete with interesting surfaces. The bonnet is muscular, the rising beltline gives the car an interesting tipped-forward stance, and then what helps break up the mass of glass is the interesting kink above the rear door handle. I even like the rear a lot. The rear windscreen isn’t vertical, so it doesn’t look like a van, and those long ‘vulture beak’-like tail-lights wrap around and enhance the width of the Triber. The cladding at the bottom, along with the mesh finish, gives it a bit of an SUV look too. Renault’s designers have also cleverly hidden that unsightly bulge or step up in the roofline behind roof rails. 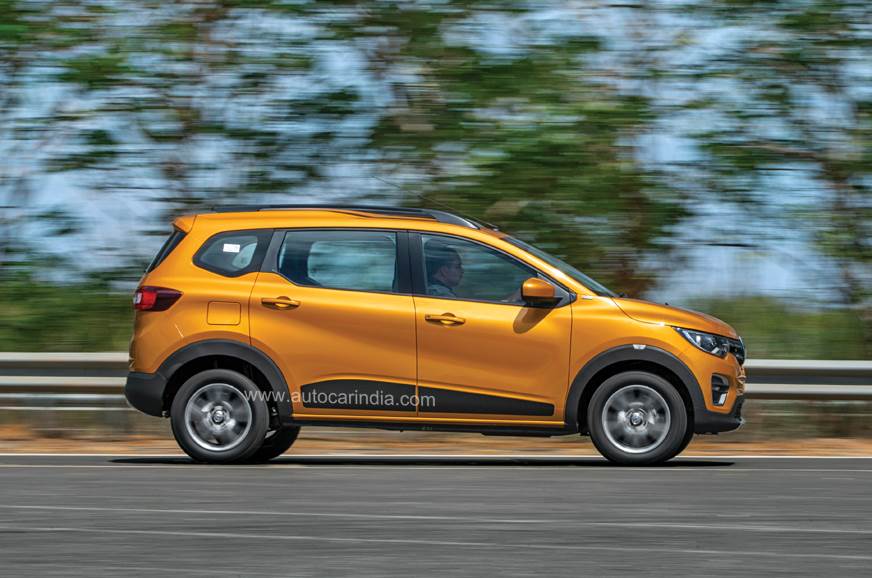 Ground clearance is an impressive 182mm. This is no poorly conceived, hastily put-together bottom feeder for sure.

But how has Renault managed to get seven seats in? It all starts up front, at the nose. I flip open the tightly packed bonnet, deputy MD Costin Seydoux at my side, and peer in. “We decided early on that there would be no diesel on this platform, and that’s allowed us to make the bonnet very compact.” The designers then stretched the wheelbase to 2,636mm for maximum space on the inside and then in another inspired move, used theatre seating – each row slightly placed higher than the previous one. The higher you place a seat, the less horizontal space you need. Still, it wasn’t easy. They fought for every millimetre of space and re-did the mock-up of the interior a thousand times to get it right, according to global design head Laurens Van Den Acker, who we spoke to earlier.

What makes the Triber work even better as a seven-seater is the fact that the CMF-A+ platform is practically all-new. Substantially larger than the CMF-A that underpins the Kwid, the width of the Triber is 174cm compared to the Kwid’s 158cm, and Renault says the common parts between the platforms are so few and far between, the platform is as good as new. 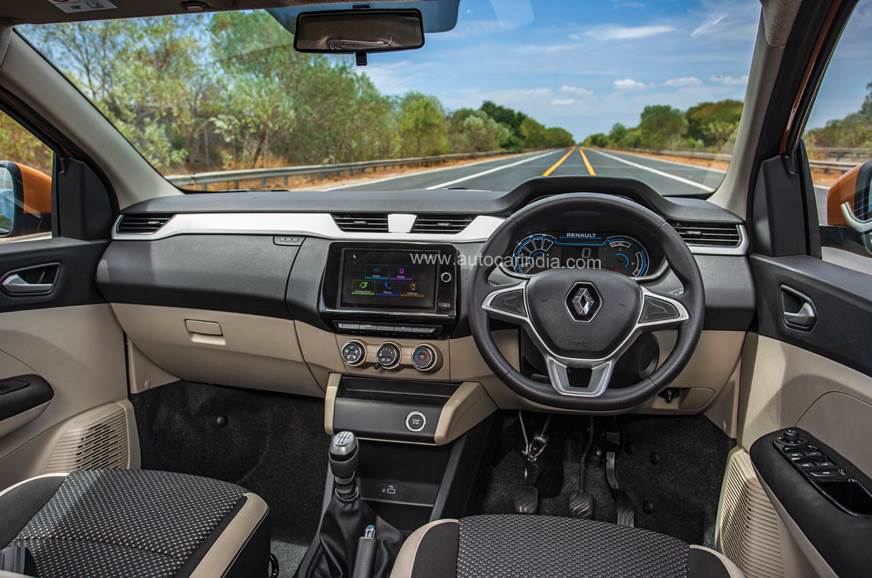 Quality is impressive and its design is attractive yet very practical.

And the fact that there is very little in common with the Kwid is clear as soon as you step into the cabin. The gear lever is similar, the power window buttons are familiar and one or two other small bits are carried over. But apart from these, the cabin is new, and frankly, built to a different level. Also, quality levels, far from being just a step up from the Kwid’s, are right up there with pricier compact SUVs. There are no soft-touch materials on the dash, but what Renault has managed to do is deliver a good mix of textures and colours. And what’s neat is that they’ve even found a new way to produce a nice, scratch-resistant matt grain at a bargain basement price. “It will now go on all of our cars,” says Lauren Van Den Acker.

Renault has also used a few well-chosen metallic highlights on the dash, and what gives it a more upmarket look is that it’s been layered beautifully, with wedge-like motifs helping one layer ‘mesh’ with the other. Also, the metallic finish that runs across the dash only ups the ambience further. Even the joints between the various surfaces have been neatly hidden out of view. 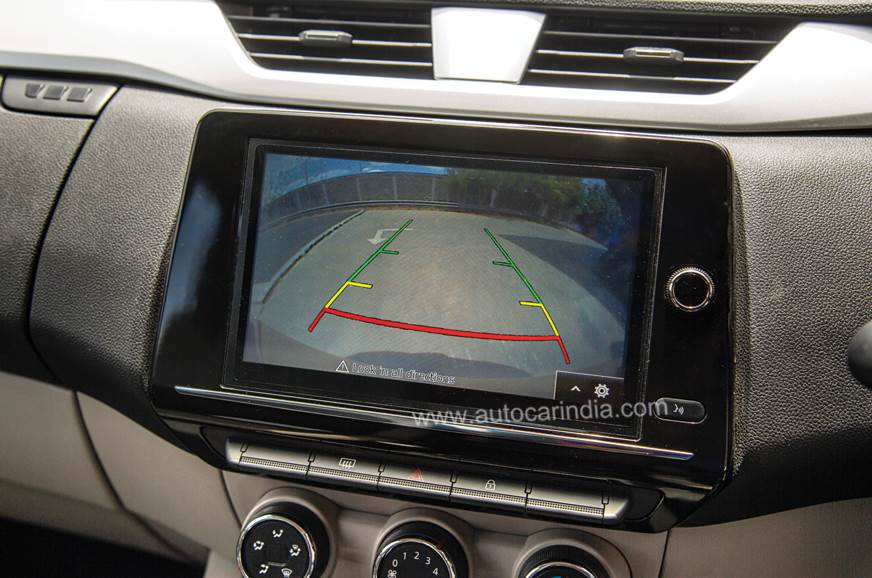 What’s interesting is that at the centre of the dash sits a big, new, 8.0-inch touchscreen, incidentally larger than the 7.0-inch unit currently offered on even the range-topping Captur. The resolution seems better than the other screen; it has Android Auto and Apple CarPlay, and functionality, in general, feels slightly improved too. 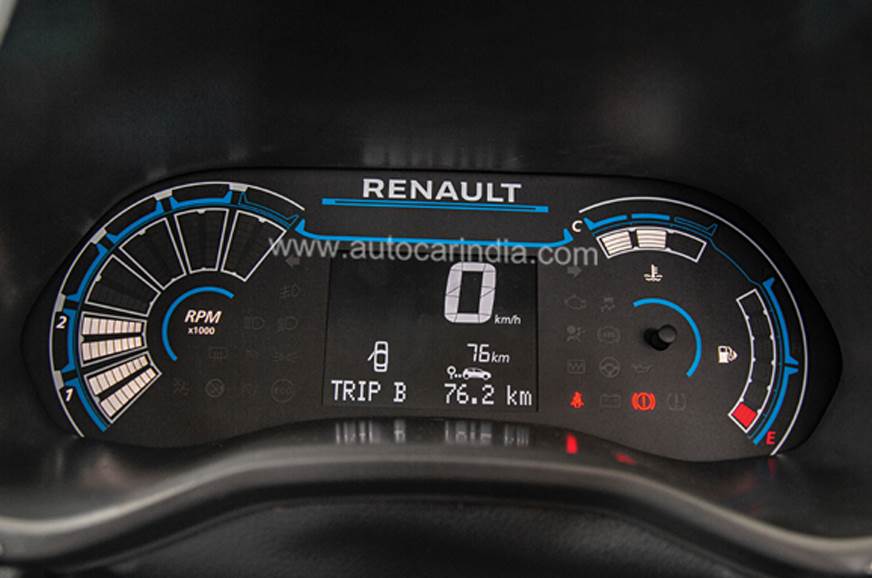 What I also particularly like is the design of Triber’s digital instrument cluster – the pizza slice-shaped tachometer sections are not as easy to read as a dial and a needle, but they look neat. And the 3.5-inch LCD screen at the centre is clear and sharp too. 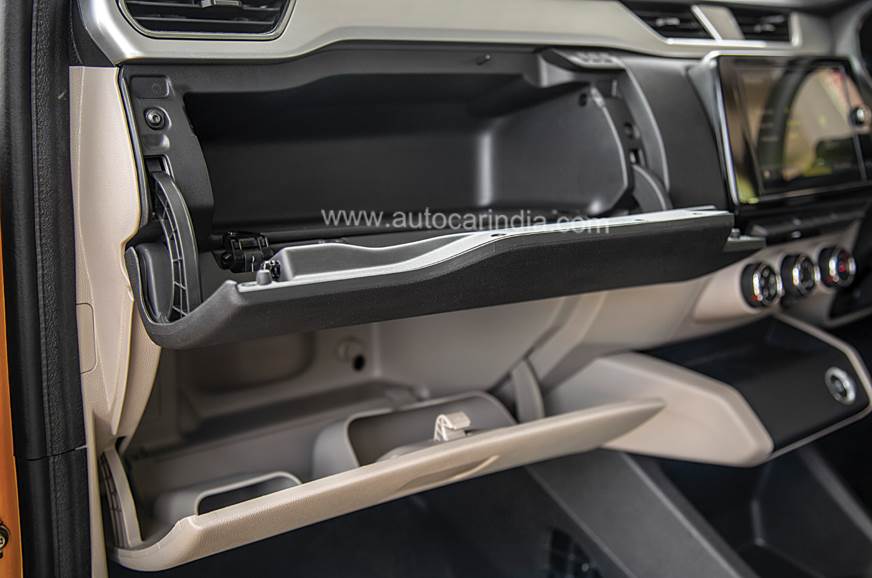 In line with its practical nature, Renault designers have also equipped the Triber with several stowage areas. There are two large gloveboxes to begin with – one of which is cooled. There’s another cooled compartment between the front seats, all four doors get ‘pockets’ and then there are plenty of stowage spaces in the centre console as well. Renault has also made sure all seven passengers stay cool. With two cooling coils, the second under the front passenger’s seat, the Triber’s air-con system is well up to the task. And the carmaker has paid attention to airflow as well. Apart from the four vents up front, the Triber also gets vents in the B-pillar for the second row, as well as overhead vents for the third row. Second-row passengers also get a blower control.

Also extremely grown up, well-contoured, and large and comfortable are the front seats. Finished smartly with the help of multiple fabrics – some of varying thickness – the seats are just right for long journeys. And there is plenty of legroom, headroom and elbow room as well. 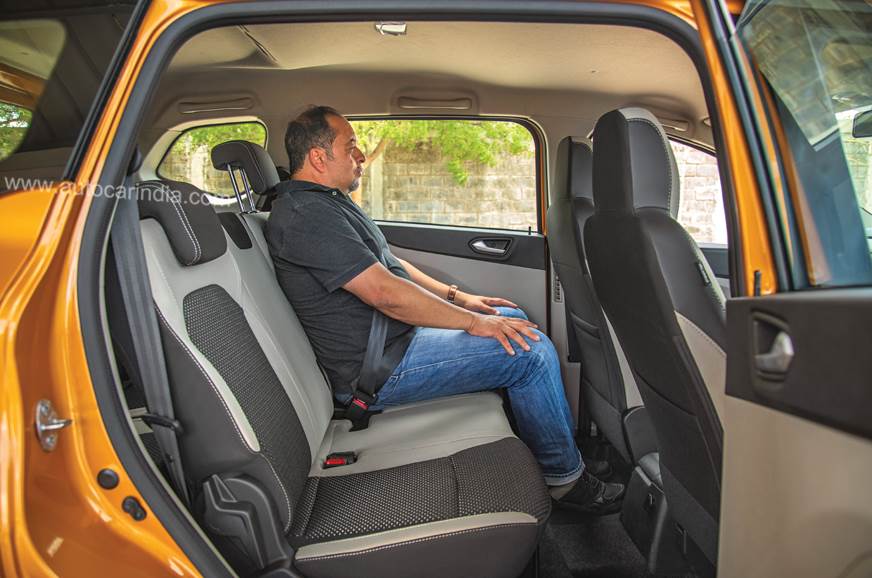 Its middle row slides and reclines. Access is made easy due to the large doors.

Space is plenty in the second row too. You are sat higher up here, and again, quality of the seat is excellent. Support for your thighs and back is very good, and what adds to comfort, especially over long drives, is that you can recline the backrest. The second row also slides back and forth. The range of movement is so large, you can push the second row all the way back when there are no passengers in the third row, and really stretch out. 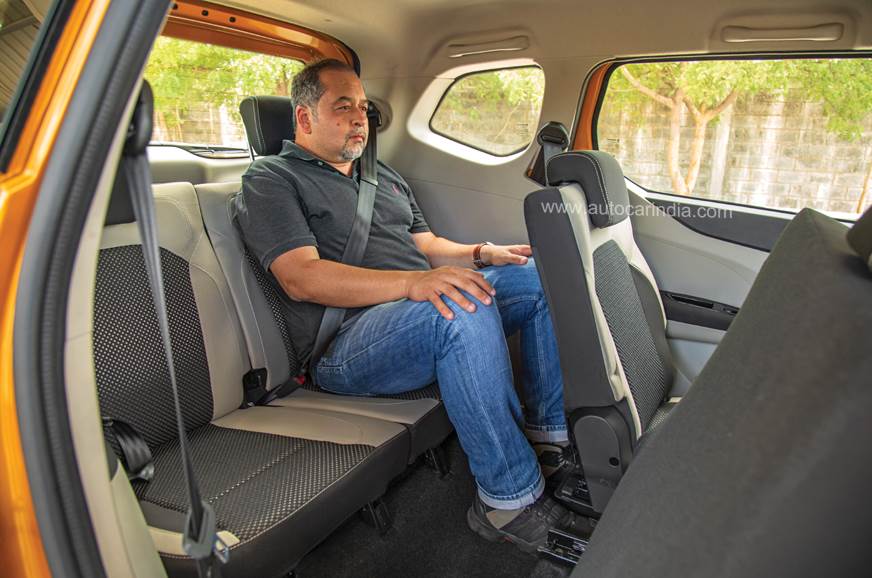 What’s impressive is that adults can sit in the third row in reasonable comfort.

Now, clambering into the third row of a car that’s under four metres long is not expected to be easy. But here, the second row can be flipped forward with just two fingers, and the large rear door allows you to step into the third row easily. And although the seat is a bit low and you sit with your knees slightly up; the third row is actually quite useable. There is no inertia reel or self-adjusting seat belts, as Renault says there’s no place for the mechanism, and the headroom for six-footers will be tight, but, otherwise, there’s enough space in the back for even longish stints. 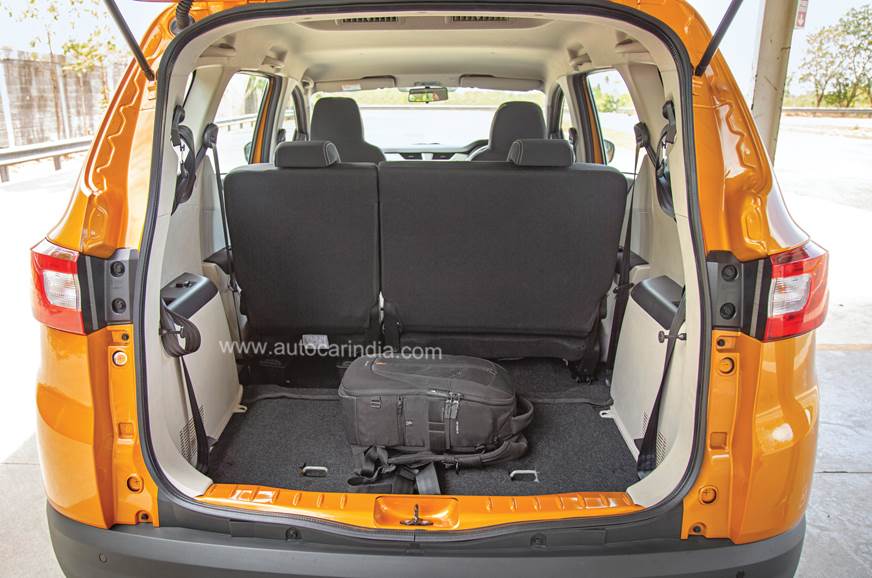 With rear seats removed, boot capacity goes up to 625L.

With all three rows up, luggage space is only 84 litres. But the third-row splits, folds down and can even be removed completely, with the two individual backrests and seats coming out quite easily. Removing both rear seats expands luggage capacity to 625 litres, which is by far the largest on any car of this size. 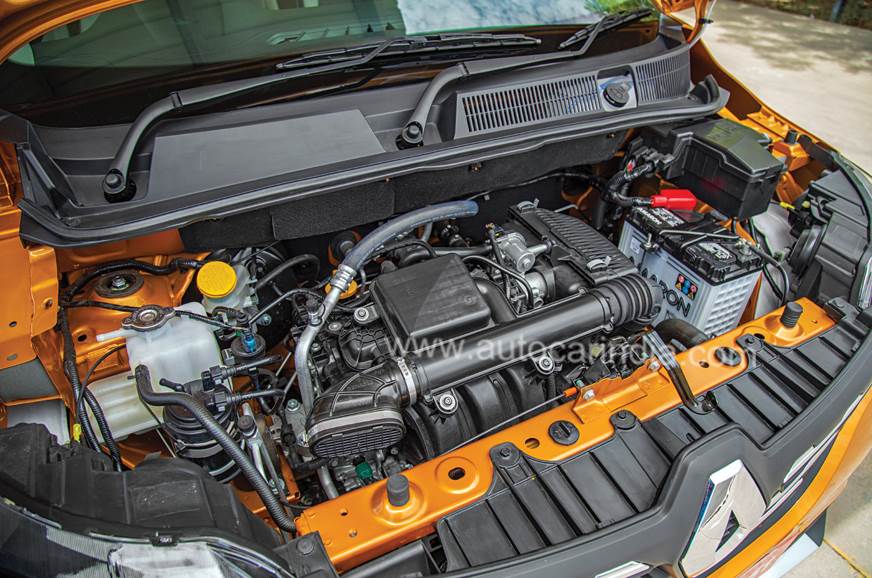 Under the muscular bonnet, the Triber gets the 1.0-litre engine that powers models like the Clio and Sandero (Logan hatchback) in other markets. Based on the Kwid’s engine, this 999cc, three-cylinder unit now gets variable valve timing on both intake and exhaust valves, and the improved breathing helps it make 72hp at 6,250rpm and 96Nm of torque at 3,500rpm.

The car seen here is still a prototype and engine calibration is still work in progress, but the brief drive does allow me to experience the potential of the dual-variable valve timing system at low engine speeds. While initial responses to a tap on the throttle are a bit relaxed, there’s a nice swell in power soon after, which is quite good for a 1.0-litre unit. And, when functioning perfectly, the variable valve timing system should, in theory, also be able to increase valve overlap and enable the engine to deliver more performance in the top end.

The Triber carries over many components from the Kwid’s gearbox, and, as a result, you get some of that ‘cable and pulley’ feel here too. The unit is, however, better located on the Triber, and that means gears slot in more easily. What also makes the experience a bit nicer is that the long-travel hydraulic clutch increases driver and shift comfort too. 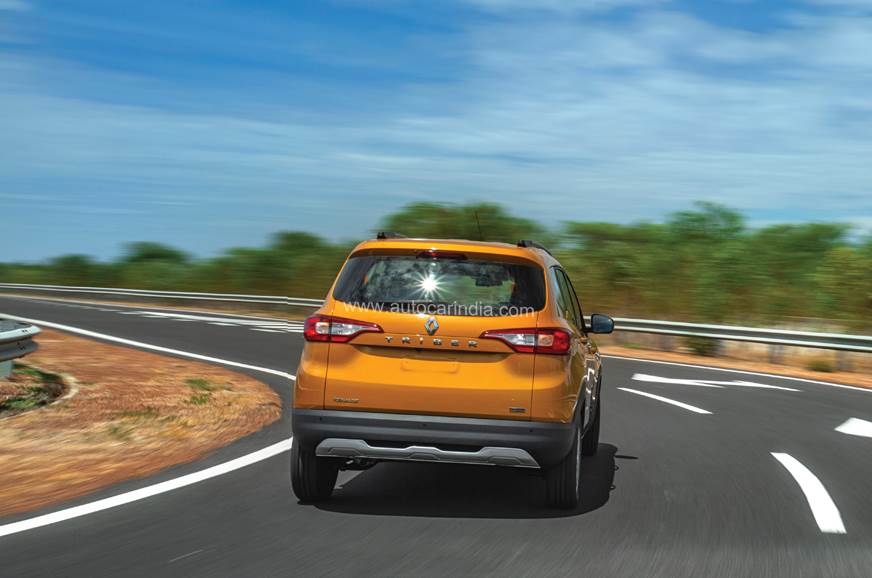 Just like other Renaults, ride comfort is likely to be one of the Triber’s strengths.

Talking of comfort, this is an area where the Triber is likely to excel. Its tall and supple springs absorb road shocks as competently as a car twice its size, the suspension working silently on sections of the track that simulates broken Indian tarmac. And what impresses me more is that it glides over some of the larger paver blocks without too many thuds filtering in either. It does roll a fair bit on some of the tighter sections of track, so it’s unlikely to be a sporty drive, but the steering is nice and direct, well-weighted and even delivers a small amount of feedback.

Renault is expected to launch the Triber sometime in August. With prices expected to be between
Rs 5 and 7 lakh (ex-showroom), it is likely to be the only car at this price point that can genuinely seat seven in relative comfort. So, clearly, the potential is huge. We just can’t wait to test the fully sorted version of the car.