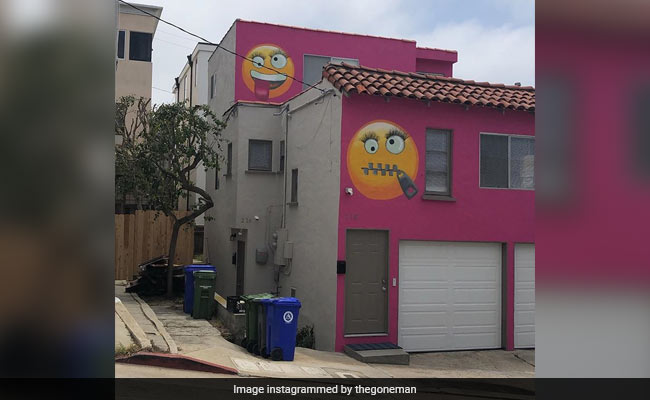 The emoji are bright yellow, with artificially long eyelashes and crisscrossed eyes. One’s tongue lolls out; the other’s mouth is zippered shut. They are painted against the pink facade of a Manhattan Beach, California, home embroiled in a feud between neighbors that has boiled over into a fight with the city.

The fracas began last year, when Kathryn Kidd bought the 39th Street duplex, according to Easy Reader News, and rolled into the neighborhood in a Mercedes convertible with a license plate holder that read, “Move Over Princess, The Queen Has Arrived.”

Neighbors told the website that after a long-term renter left, they believe Kidd started using her property for short-term rentals, which are illegal in Manhattan Beach. Her neighbors outed her to the city, which reportedly fined her $4,000 in May.

Then Susan Wieland, who was among the group that reported Kidd, returned home from a work trip in June and saw the home’s new paint job. She told Easy Reader News that she stared at the emoji’s bold eyelashes and burst into tears.

“I feel like I’ve been directly attacked with my eyelash extensions,” Wieland told the news site. “It’s definitely directed. I had them done here in Manhattan Beach, and they did them way too big. Now it’s painted on the house.”

Wieland immediately pulled down the shades of her emoji-facing windows and has left them shut, she told Easy Reader News. She was sure, she said, that Kidd was mocking her.

“I feel like I’m being bullied, frankly, by her,” Wieland said, according to Easy Reader News. “That word keeps coming up to me: she’s a bully, and she feels she is entitled. She just wants to make things uncomfortable for us.”

Although spats between neighbors are common, they rarely escalate to the level of caustic hostility that makes national news. Among the most notorious examples from recent years is a reported disagreement over grass length and tree placement that landed Sen. Rand Paul, R-Ky., in the hospital with six broken ribs in 2017. (Paul’s staff has contended the attack was politically motivated.)`

Kidd, however, denied that the emoji on her Manhattan Beach property are related to any conflict with her neighbors, including Wieland. She told Easy Reader News she wanted to cheer up the neighborhood with her “happy house,” which the Airbnb listing shows was previously sand-colored.

“Instead of everybody being so gloomy, always so depressed, always in other people’s business, I just wanted to send a message to be happy,” Kidd told Easy Reader, “be colorful, be positive, and enjoy.”

The artist who painted the house, who goes by “Z the Art,” shared a photo of his creation in an Instagram post in May. He initially posted a caption that has since been deleted: “Are your neighbors constantly ratting you out? Have they cost you thousands in fines? Have you wanted to tell them off lately? Why risk a case, when you can hire me to paint them a pretty message?”

Kidd’s neighbors told the Los Angeles Times they don’t consider the ordeal to be a laughing matter. They said they feel targeted and are researching arguments they could use to persuade the city to order the paint removed: The artwork could be considered graffiti, it could break signage laws; or it’s a public safety issue because news trucks and spectators have been stopping by to gawk at the house.

A resident told the planning commission on July 10 that she worried other homeowners might paint murals that would irritate neighbors if the city didn’t take a stand against the emoji display. Another person urged the commission to pass an ordinance allowing the city to regulate graphics that are used to intimidate or that lack artistic value.

City Commissioner Gerry Morton questioned at the meeting whether the emoji could be considered a sign advertising Kidd’s rental business and therefore could be regulated legally. In response, Community Development Director Anne McIntosh gave the example of a local spa, where words on the side of the building were deemed not to be signage because they didn’t promote the business.

McIntosh told The Washington Post on Thursday that Manhattan Beach’s municipal code does not ban murals, paintings or graphics on homes. She cited Supreme Court decisions ruling that the First Amendment generally requires restrictions on speech to be neutral toward the content. She said this means the city could not, for example, say homes can have sunbursts painted on their garages, but emoji are not allowed.

“Older communities like Manhattan Beach have a lot of eclectic architecture that were built over many years of time,” McIntosh said. “… And I think the city has just never wanted to over-regulate people’s ability to have their home the way they want it.”

The planning commission intends to revisit the issue at its Aug. 28 meeting, McIntosh said.

Residents, meanwhile, are eager for change.

“To me, there are just so many ways the city could step in if they want to,” Dina Doll, a local homeowner, told the Los Angeles Times. “At this point, there is no neutral for the city. Not taking action is condoning this. And do we really as a community want to condone this?”