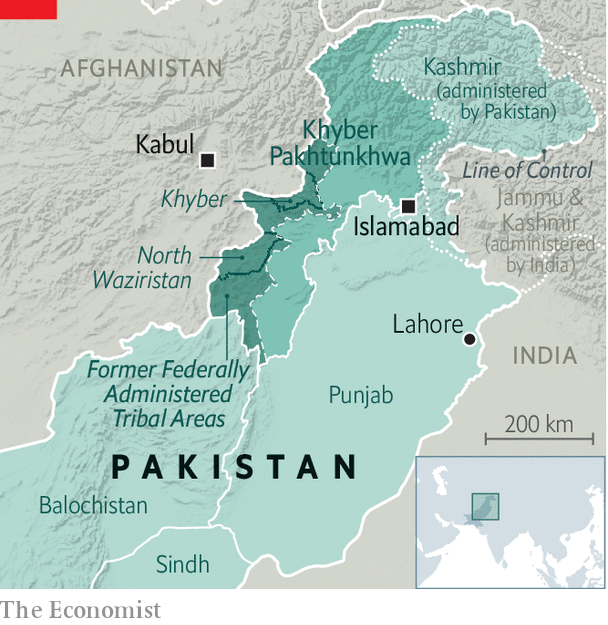 NAHEED AFRIDI is something of a spectacle. She is canvassing for votes in Khyber district ahead of elections later this month. In a region where women are largely confined to their homes, her progress through villages near the Afghan border attracts curiosity and admiration, but also criticism. “I know I have challenged the ego of so-called strong men, and that’s why they tell me it’s against our religion and culture,” she says.

The poll on July 20th, in which candidates will vie for one of 16 slots in the provincial assembly, is a milestone for Pakistan’s neglected tribal borderlands: it is the first time they have been allowed to vote for local administrators. Since colonial times, the area has been run directly by the central government. But last year a constitutional amendment brought the Federally Administered Tribal Areas (FATA), as the frontier zone used to be known, into the political and legal mainstream by merging it into the neighbouring province of Khyber Pakhtunkhwa. In theory, that gives the region’s 5m inhabitants the same rights as other Pakistanis. But the ballot follows a military crackdown against the very movement for civil liberties which has recently been invigorating local politics.

FATA has been starved of development and repressed for decades—in part, presumably, because its people had little say in how it was run. The Frontier Crimes Regulations—passed more than a century ago—awarded a colonial official nearly absolute power. The set-up stayed in place after the British left because it suited the Pakistani authorities too.

Life for residents worsened when FATA became a battleground after 9/11. Used for years as a base for Islamist insurgents who served as Pakistani proxies in Afghanistan, and then colonised by Afghan militants, it became a haven for jihadists. Residents, mainly from the Pushtun ethnic minority, found themselves caught between the militants and the army’s repeated offensives. The most recent, in a part of FATA called Waziristan in 2014, finally pushed the militants out and ended a bloody domestic terrorist campaign by the Pakistani Taliban.

The army now claims that peace has been restored in the tribal borderlands and that rebuilding is under way. Opposition parties say that its tough tactics undermine promises of reform and show it has little intention of allowing civilian governance to bloom. The disagreement is at the core of the forthcoming election. Although security in the country has improved, military campaigns have displaced hundreds of thousands of people and soldiers stand accused of human-rights abuses.

A popular protest movement called the PTM arose in the area in 2018. Its activists complain of oppressive curfews and checkpoints, and also decry extra-judicial killings and disappearances. Supporters thronged to its rallies. Unaccustomed to such dissent, the army at first tried to appease the PTM. Then its intolerance returned. In April infuriated generals publicly warned that the PTM’s time was up. The following month troops at a checkpoint in Waziristan fired into a crowd of its supporters and killed 13. The army claimed the soldiers were fired on first; the PTM says the crowd was unarmed. Two MPs who support the PTM and were at the scene, Mohsin Dawar and Ali Wazir, are being held under anti-terrorism laws. The army accuses the PTM of anti-state activities, backed by India and Afghanistan. Journalists have been ordered not to cover the group.

The crackdown shows that power still lies with the army, despite the democratic promise of the approaching elections. In Waziristan a ban on rallies and political meetings was in place until two weeks before the contest. Opposition politicians say the reason given—to ensure security—is a pretext to constrain them and so help the Pakistan Tehreek-e-Insaf (PTI) party, which is in government at both the provincial and national level.

Whoever wins the privilege of representing the region will have their work cut out. Large investments are needed in schools, hospitals, roads and water supplies to bring services in the area to a level similar to the rest of Pakistan. But promised money has yet to arrive. Adopting a proper judicial system is another headache. The borderlands have no courts and tribal police flail in the face of paperwork and investigations. Lawyers in interim courts say cases suffer when caught between the old and new systems.

Despite growing disaffection with the slow pace of reforms and the pain of austerity measures imposed by the national government, the PTI is expected to do well at the polls. Ameer Muhammad Khan, a candidate for the party, says he meets scores of enthusiastic party workers at his campaign office each day. The vote will prove “historic in the life of every tribal person”, he says. It will also test the limits of the army’s forbearance. ■