Benchmark indices are witnessing one of the biggest falls in recent times. Sensex has plunged 700 points in this afternoon session and is trading at 36,790 mark while Nifty50 cracked 211 points and is trading at 10,906.

In terms of sectors, the S&P BSE Metals was the top loser followed by S&P BSE Capital Goods along with S&P BSE Finance, S&P BSE Industrials and S&P BSE Telecom that shed between 2-3 percent.

Nifty Media along with banks, metals and the IT sectors are the biggest losers, down 2-3 percent. The top Nifty losers include Vedanta, JSW Steel, Tata Motors, State Bank of India and Bharti Airtel. 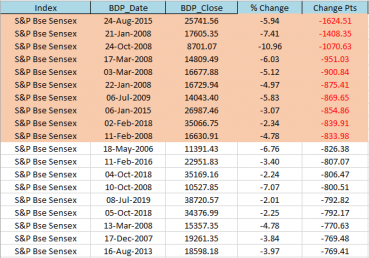 “We may see outflows that can further extend. Since few concerns are mounting at present. The latest move by the government is going to affect many FPIs that are registered as trusts. This is almost more than 38 percent of the total FPI registered in the country,” Mustafa Nadeem, CEO, Epic Research told Moneycontrol.

US Federal Reserve, on expected lines, slashed rates by 25 bps for the first time in a decade but dashed hopes of a further rate cut in the near future. Market participants were looking for a more dovish commentary from the central bankers.

Growth of eight core industries dropped to 0.2 percent in June mainly due to a contraction in oil-related sectors as well as in cement production, according to official data.

Nifty slipped below its crucial psychological levels of 11,000. It has already broken below its 200-DMA placed at 11,140 on July 31. As long as the index trades below this level, chances of further selling increases.

“Nifty is still trading below its 200-day moving average. Traders are advised to refrain from creating long positions until this index consolidates around these levels for a couple of days and shows some signs of strength on momentum oscillators,” Mazhar Mohammad, Chief Strategist – Technical Research & Trading Advisory, Chartviewindia.in told Moneycontrol.