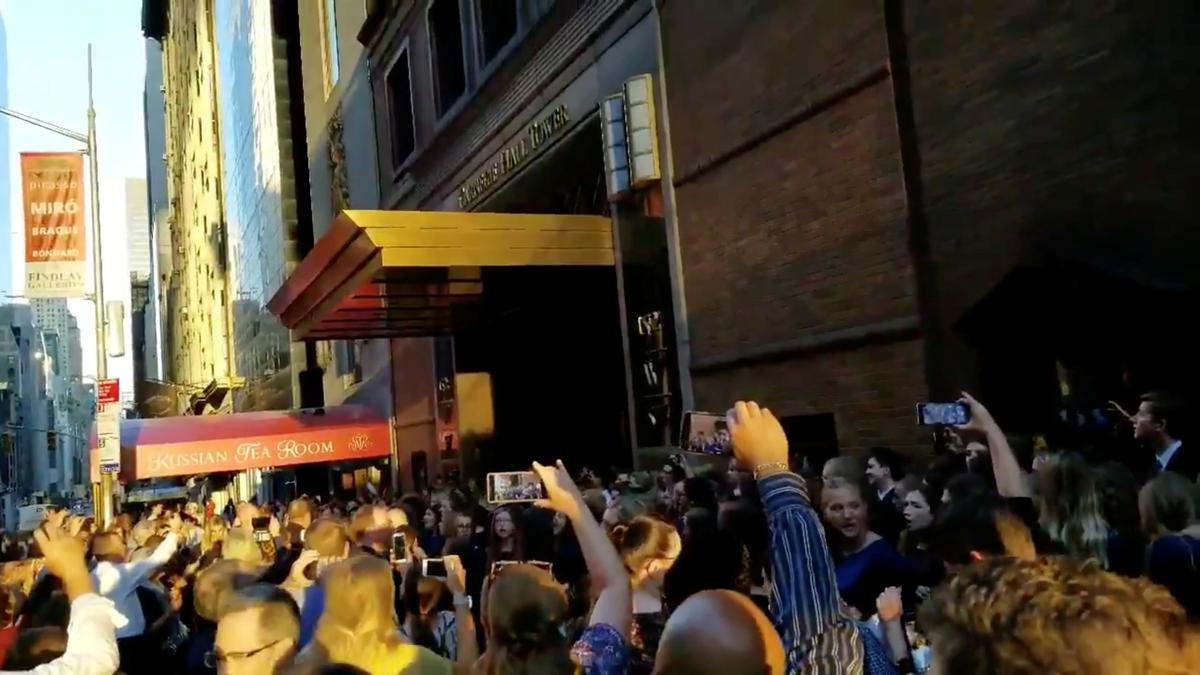 NEW YORK (Reuters) – When a massive blackout plunged much of Manhattan into darkness on Saturday evening, a choir and the casts of Broadway musicals entertained tourists with impromptu performances in the street.

People evacuated from a Carnegie Hall concert during a blackout due to widespread power outages in the Manhattan borough of New York City, U.S, listen to the choir singing on the street in this still frame obtained via social media video July 13, 2019. @MARLINPIE via REUTERS

The outages struck at around 7 p.m. (2300 GMT), just as many shows were starting at theaters in Midtown and at the Lincoln Center plaza on New York City’s Upper West Side.

With subway stations and traffic lights suddenly dark, thousands of people spilled outside on a hot summer’s night. Some were surprised by what they found, including writer Briallen Hopper, who had been trapped on a subway train for an hour.

“I guess this is what they call a New York moment,” she wrote on Twitter with a video of a choir singing at sunset. “I emerged to see dark restaurants & traffic lights, civilians directing traffic, & an evacuated Carnegie Hall concert happening in the street.”

Another Twitter user, Caryn Ross, agreed, posting video of the street concert by the Millennial Choirs and Orchestras with the hashtag #BeautifulSoundsDuringBlackout: “Now this is what turning lemons into lemonade is about!” she wrote.

Also unexpected were scenes of multiple civilians who stepped into always-busy intersections to help direct traffic snarled by the lack of traffic lights.

One middle-aged man in shorts and a red tank-top managed the flow of vehicles at one junction for at least 45 minutes, drawing plaudits on social media.

In a photo on Twitter taken after darkness fell, one civilian was seen directing traffic in the Hell’s Kitchen neighborhood with a toy light saber.

At Madison Square Garden, the blackout put a sudden stop to a Jennifer Lopez concert, plunging the arena into darkness.

“I am obviously heartbroken and devastated,” Bronx native Lopez said in a video clip she sent in a Twitter post for her fans. “I love you. I am so sorry this happened in the middle of our moment, at our show.”

All Broadway theaters were closed due to the blackout except for the Winter Garden Theater, Nederlander Theater, and Lyceum Theatre, authorities said.

But among those who entertained theatergoers with off-the-cuff performances nonetheless were the casts of the musicals “Waitress,” “Hadestown,” “Come From Away,” and “Rock Of Ages.”

One Twitter user named Antony posted video of the cast of “Hamilton: An American Musical” singing from theater windows to the crowds in the street below.

“It was awesome!” he wrote.