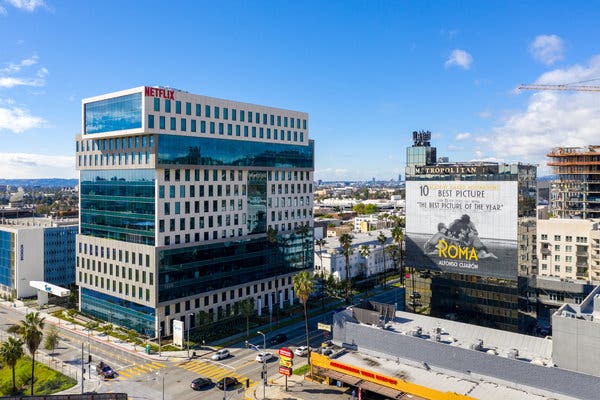 LOS ANGELES — Dolly Parton recently held court there, big wig and all. Leonardo DiCaprio and John Kerry arrived at the same time last month. Cindy Crawford on the left, David Letterman on the right. And isn’t that Beyoncé by the espresso bar?

Scratch that. It’s a “lobby experience” and “creative gateway,” according to a design firm that worked on the space. An 80-foot by 12-foot video screen makes visitors feel like they are inside Netflix shows — visiting the “Narcos” cocaine lab, for instance, or sitting on the Blue Cat Lodge boat dock from “Ozark.” Another wall is covered by at least 3,500 plants, a living mural that includes red Flamingo Lilies, known for their big pistils.

Every era in Hollywood has a symbolic epicenter, a place that sums up everything, especially power and sometimes absurdity. Gifting suites at the Sundance Film Festival epitomized the overheated indie boom of the 2000s. The monolithic new Creative Artists Agency headquarters arrived on cue at the end of that decade and represented an increasingly corporate film business. Next came Comic-Con International, a sweaty July convention for superhero devotees that marked a turn toward franchises and fan communities.

Netflix’s 4,780-square foot lobby is an icon of the Hollywood of today, with its tech money and displays of social justice and blurred lines between film and television. If you wanted to make a movie or series about Hollywood circa 2019 — an update on “Entourage” or “The Player” or “Get Shorty” — you would have to set a scene there.

“It has become the town hall of Hollywood, where you’ll see celebrities and filmmakers intersecting with politicians and musicians, everyone waiting in the same space on the same couches indulging in the same free food,” said Shawn Levy, a producer and director whose credits include the Netflix juggernaut “Stranger Things.”

At any given moment, an entertainment who’s who seems to be camped out in the bourbon-colored chairs or networking from the bluish midcentury-modern sofas. Netflix declined to comment for this article, but insiders say that about 300 guests come through the lobby for meetings on an average day: agents, publicists, writers, producers, directors, stars — many hoping for a piece of the roughly $8 billion the streaming service spends on original content annually, some with projects already in the works.

“It’s definitely a scene,” said Brian Grazer, the Oscar-winning producer who is working on a film adaptation of the memoir “Hillbilly Elegy” for Netflix.

What was Jeff Shell, chairman of NBCUniversal Film and Entertainment, doing there? Having lunch upstairs with Ted Sarandos, Netflix’s chief content officer, it turned out. Now that is pull: Hollywood moguls usually meet on neutral turf.

Former President Barack Obama was discreet. When he visited Netflix, probably to discuss his production deal, Mr. Obama did not pass through the lobby, according to two people with knowledge of the matter, who spoke on the condition of anonymity because the visit was private. Netflix allows mega-V.I.P.s to use a secret tunnel that runs between a parking structure and Netflix’s employee elevators.

The lobby and tower above it — the Icon Building, in Netflix parlance, soon to be joined by the Epic Building a block away — symbolize how David has become Goliath.

“A building like this is a statement of who you are, what you believe and what you want to do,” Mr. Sarandos said in 2016 at a Hollywood Chamber of Commerce event.

Would you like something to drink while you wait? Help yourself to a chilled can of LaCroix, the trendy sparkling water. There is also a complimentary Starbucks-style coffee and tea bar; sweeteners include caramel syrup and organic blue agave honey. And a smorgasbord of snacks: bananas, Pop Chips, pistachios, peanut M&Ms, gummy candy, almonds, energy bars in seven varieties, Chex Mix.

Don’t worry about your breath. Netflix bathrooms feature mouthwash-dispensing machines and bins full of disposable “prepasted” toothbrushes. Mints and packs of Dentyne Ice (“60 Minute Fresh Breath”) are free for the taking near the espresso machines.

Netflix’s old space in Beverly Hills, leased in 2003 when the company was just a DVD-by-mail provider, was ordinary and cramped. Eight people could barely sit elbow to elbow in its waiting space. (Netflix’s corporate headquarters in Silicon Valley also has a ho-hum lobby.) In contrast, the arrival hall of the Icon Building, opened in 2017, can easily accommodate crowds. Netflix often uses the space for evening events; there is a 120-seat theater behind the plant wall.

The new lobby has multiple showpieces. Rows of Emmy and Oscar statuettes glisten in glass cabinets at its center. There is an installation involving 110 individually programmed video screens of different sizes (iPad, iPhone, laptop). But the pièce de résistance is the 80-foot video screen. Mr. Sarandos came up with the idea.

He was inside a refurbished terminal at Los Angeles International Airport and found himself riveted by colossal video art, as the story goes. Then he recalled a video installation in the lobby at the Salesforce headquarters in San Francisco. Before long, Netflix had a fleet of design firms working on what one of them, D3 LED, later called a “challenge of epic proportions.”

The Netflix video wall, 46 million pixels in two layers, was designed to make footage of sets appear hyper-real, as if guests stepped inside the film or show. To accomplish the visual trick, one layer of pixels creates the environment — the prison cafeteria from “Orange is the New Black,” for instance — and a second layer adds subtle and periodic movements called “sprites,” like steam rising from the cafeteria’s soup pots.

Scenes play for 10 minutes, although receptionists can “pause playback to welcome high-profile guests,” according to D3. Imagine that Alfonso Cuarón, the Oscar-winning force behind Netflix’s “Roma,” is on his way in for a meeting with Mr. Sarandos. It may be no accident that “Roma” is on the wall when he arrives.

Netflix also uses props to celebrate hits and emphasize the company’s values. A colossal megaphone created for a “Dear White People” marketing campaign was on display in the lobby; “Stay Woke,” a slogan on the megaphone’s side read. A rainbow created by hair dryers of different colors was recently in the front window to mark the return of “Queer Eye” and the start of L.G.B.T.Q. Pride month.

The Netflix building is across from a Denny’s and a tire-repair shop at the corner of Sunset Boulevard and Van Ness Avenue on an old studio lot where Warner Bros. got its start a century ago. But the building is most definitely not open to the public.

To enter, you must first go through an outdoor checkpoint with three guards wearing yellow safety vests. They direct cars to free valet parking (where Jay Leno was waiting the other day) and guests then walk across an entrance plaza and into the lobby, where three receptionists and another security guard await.

This setup is routine in Hollywood, but Netflix sometimes displays its streaming DNA by adding a password to the mix. Recent arrival instructions for an evening event read, “Give the password COURAGE to gate security in order to speed up the process.”