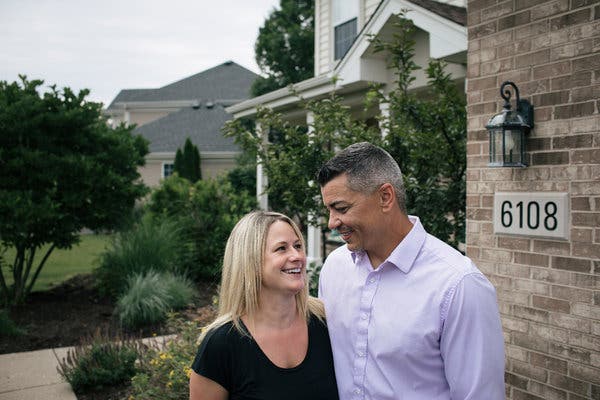 PLAINFIELD, Ill. — The mortgage-interest deduction, a beloved tax break bound tightly to the American dream of homeownership, once seemed politically invincible. Then it nearly vanished in middle-class neighborhoods across the country, and it appears that hardly anyone noticed.

In places like Plainfield, a southwestern outpost in the area known locally as Chicagoland, the housing market is humming. The people selling and buying homes do not seem to care much that President Trump’s signature tax overhaul effectively, although indirectly, vaporized a longtime source of government support for homeowners and housing prices.

The 2017 law nearly doubled the standard deduction — to $24,000 for a couple filing jointly — on federal income taxes, giving millions of households an incentive to stop claiming itemized deductions.

As a result, far fewer families — and, in particular, far fewer middle-class families — are claiming the itemized deduction for mortgage interest. In 2018, about one in five taxpayers claimed the deduction, Internal Revenue Service statistics show. This year, that number fell to less than one in 10. For families earning less than $100,000, the decline was even more stark.

The benefit, as it remains, is largely for high earners, and more limited than it once was: The 2017 law capped the maximum value of new mortgage debt eligible for the deduction at $750,000, down from $1 million. There has been no audible public outcry, prompting some people in Washington to propose scrapping the tax break entirely.

If the deduction’s decline should be causing a stir anywhere, it is in towns like Plainfield, where the typical family earns about $100,000 a year and the typical home sells for around $300,000. But housing professionals, home buyers and sellers — and detailed statistics about the housing market — show no signs that the drop in the use of the tax break is weighing on prices or activity.

“From the perspective of selling and trying to buy, I don’t see any evidence of that,” said Paul Forsythe, who teaches physical education and coaches football at a high school.

Mr. Forsythe and his wife, Kylie, are selling their four-bedroom, two-bath home on a quarter-acre lot in one of Plainfield’s older developments, which dates to 1997. They are moving with their two daughters to a nearby suburb, closer to the schools where they work. They have owned homes through the ups and downs of the local housing market, which boomed in the early 2000s and crashed in the midst of the financial crisis.

Such reactions challenge a longstanding American political consensus. For decades, the mortgage-interest deduction has been alternately hailed as a linchpin of support for homeownership (by the real estate industry) and reviled as a symbol of tax policy gone awry (by economists). What pretty much everyone agreed on, though, was that it was politically untouchable.

Nearly 30 million tax filers wrote off a collective $273 billion in mortgage interest in 2018. Repealing the deduction, the conventional wisdom presumed, would effectively mean raising taxes on millions of middle-class families spread across every congressional district. And if anyone were tempted to try, an army of real estate brokers, home builders and developers — and their lobbyists — were ready to rush to the deduction’s defense.

“The rejoinder was always, ‘Oh, but you’d never be able to get rid of the mortgage-interest deduction,’ but I certainly wouldn’t say never now,” said William G. Gale, an economist at the Brookings Institution and a former adviser to President George H.W. Bush. “It used to be that this was a middle-class birthright or something like that, but it’s kind of hard to argue that when only 8 percent of households are taking the deduction.”

Mr. Gale, like most economists on the left and the right, has long argued that the mortgage-interest deduction violated every rule of good policymaking. It was regressive, benefiting wealthy families — who are more likely to own homes, and to have bigger mortgages — more than poorer ones. It distorted the housing market, encouraging Americans to buy the biggest home possible to take maximum advantage of the deduction. Studies repeatedly found that the deduction actually reduced ownership rates by helping to inflate home prices, making homes less affordable to first-time buyers.

But the real estate industry said that scrapping the deduction could undermine the value of what is, for most American families, their most important asset. In the debate over the tax law in 2017, the industry warned that the legislation could cause house prices to fall 10 percent or more in some parts of the country.

Price growth has cooled in many markets, including New York and Seattle, but not nearly as much as the most alarming estimates suggested, and not in a pattern that suggests the loss of the deduction was a primary factor. Places where a large share of middle-class taxpayers took the mortgage-interest deduction, for example, have not seen any meaningful difference in price increases from less-affected areas, according to a New York Times analysis of data from the real estate site Zillow.

Skylar Olsen, an economist at Zillow, said that the slowdown in the housing market probably had little to do with the tax law. Home prices have risen much faster than wages in recent years, creating an affordability crisis in many cities that probably made slower growth in prices inevitable.

“Housing markets were burning so hot at an unsustainable pace and they had to come down,” Ms. Olsen said.

The tax law may have had another impact: It capped deductions for state and local taxes at $10,000, which had a particularly large effect in coastal cities and other places where property taxes and real estate values are both high. Those places did see a slowdown in the growth of home prices after the law took effect, although it is not clear whether the two were linked.

The national real estate industry argues that the two tax changes have together played a role in weakening the housing market.

“Clearly the housing market is underperforming in relation to economic fundamentals of job growth, wage growth and mortgage rates,” said Lawrence Yun, chief economist for the National Association of Realtors.

Economists like Mr. Yun and Ms. Olsen will probably debate the law’s impact for years. It is possible, and even likely, that sophisticated analyses will eventually conclude that limiting the mortgage-interest deduction did lead to somewhat slower price growth.

But for most home buyers and sellers, those subtle effects will be washed away by forces that have a much bigger impact: changes to mortgage rates, construction costs and supply and demand trends that vary from city to city and from neighborhood to neighborhood.

The tax law also rolled back the mortgage-interest deduction in a way that minimized the chance that taxpayers would notice its absence. Congress did not take away the tax break; it just changed the law in a way that meant fewer people would benefit from it — and buried the change in a much broader overhaul to the tax code.

But while Washington think tanks plot the deduction’s demise, the real estate industry is still hoping to restore it in some form. Mr. Yun of the National Association for Realtors said that as the housing market weakened, pressure would mount for Congress to restore some of the tax advantages that homeownership has historically enjoyed, although not necessarily in the same form.

For now, though, real estate agents and developers do not see the erosion of the mortgage deduction playing much of a role.

Plainfield’s housing market has been shaped by abrupt changes over the past 30 years. In 1990, a tornado leveled parts of town, killing more than two dozen people and forcing a huge rebuilding effort. At the turn of the millennium, the town had fewer than 10,000 residents. It has since quadrupled, with more growth on the way.

During the housing craze of the mid-2000s, developers leveled corn fields and sod farms to make way for cul-de-sacs. When the crisis hit, activity in many of the new subdivisions froze, said Ellen Williams, a real estate agent with Coldwell Banker in Plainfield who has sold homes in the area for nearly two decades. Only in the past few years has construction restarted in earnest.

Ms. Williams helped the Forsythes buy their home several years ago, when the housing crash still weighed on the market and the couple was underwater on a townhouse that had become too small for their growing family. They rent the townhouse out now, which means that they still itemize their deductions, including for mortgage interest. They said the deduction was not a factor in the sale of their home this summer or in their purchase of a new one.

Ms. Williams said that has been the case across the market. “I don’t know that it’s been a huge enough change yet,” she said. “People worry about Illinois taxes more.”

In the Forsythes’ ZIP code, housing prices are up 2 percent from the last year, according to data from the online real estate brokerage Redfin. Homes are selling quickly, Ms. Williams said, as she gave a quick tour of a recently listed four-bedroom house backing up to a pond in a nearby community. The hardwood floors were well kept, the kitchen hardware dated to the mid-1990s and the home was listed for $267,000.

“There’s not a lot available in this subdivision,” Ms. Williams said, “so I anticipate it selling quickly.”