When she arrived at the debates this week, appearing onstage with nine other candidates, including Joe Biden, Bernie Sanders, Kamala Harris and Pete Buttigieg, she aroused a strong and emotional response, provoking some combination of ire, confusion, admiration and hilarity.

She was on the one hand the candidate who campaigns strongly on reparations for African-Americans; she also told America she was going to “harness love.” She was compared to Kate Bush and Stevie Nicks; jokes on Twitter about shawls and the astral plane and witchcraft proliferated, where her own Twitter history was harvested.

It’s a variation of the same message Ms. Williamson has been delivering since the late 1980s, but Thursday night it landed before a new audience less likely to be aware of her self-help book series, the latest of which, “A Politics of Love,” was released just a few months into her campaign — endeavors, she says, that are not so related.

“If I was just out to sell books and do better in my career commercially, I would never have mentioned politics,” Ms. Williamson said, while campaigning in Iowa. “I saw somebody on Twitter say, ‘This is a cash grab. She’s going to raise money. And then she’s going to take all the campaign contributions. And then she’s going to quit.’ And I thought, ‘No, that’s how you go to prison.’ A much better idea is just writing another book.”

“If anything is ego destroying, it’s running for political office,” she said. “The current phrase is ‘brand protection.’ This is the last thing you want to do if you want to protect your brand.”

Her Brand Is Love

In many ways, Ms. Williamson is a strange sort of photonegative, a parallel yet opposite image of President Trump, who became a boldface name around the same time, and whose vision of America is tethered to economics in the 1980s — the exact time Ms. Williamson has pinpointed as the decline of great America.

While he was enacting a great branding upon the real estate of the world, she was on a path to help people harness their energies, to seal themselves in bubbles of light and love. Central to her worldview is the power of thought — that intentions create events, or cause illness, and that people choose between fear and love constantly.

She has said that stress is “the No. 1 root of all illness” and preached that “the AIDS virus is not more powerful than God.” These ideas about “toxicity” and the power of thought — philosophical, rather than actually science-backed theories — have since been introduced to the worldview of nearly everyone who has attended a gym yoga class.

But she does not see this as a metaphor. For her, this is fact.

She has also not exactly been clear on vaccines, even when trying to clarify her position on them. “I understand that many vaccines are important and save lives,” she tweeted in June, slightly walking back a speech she made attacking “mandatory” vaccinations. (Vaccines save hundreds of thousands of lives in the United States alone.)

Ms. Williamson was among the chief early purveyors of many ideas that no longer seem as fringe as they once did, and she helped open the way to the current vogue for astrology, yoga and witchcraft, whether as metaphor or as ritual.

As a theater major at Pomona College, Ms. Williamson says she would read Ram Dass and Alan Watts in the morning and attend antiwar protests in the afternoon. She struggled to find a place for herself in America as an adult.

After dropping out of college in her junior year she drifted across the American Southwest, through the waning psychedelic drug culture of the late 1970s, working as a cabaret singer, waitress and temp before ultimately finding herself in the pages of Helen Schucman’s 1976 self-help book called “A Course in Miracles.”

As she began lecturing weekly on her interpretation of the meaning of life, her message clicked with acolytes across the country — Cher, Rosanna Arquette and Raquel Welch reportedly among them. By 1991, she was among the nation’s premier metaphysicists, and an officiant at Elizabeth Taylor’s eighth and final wedding.

Ms. Williamson became truly famous in 1992 with the publication of “A Return to Love,” her nonsecular interpretation of “A Course in Miracles,” in which she posited that the gloom emanating from the ’80s could be cured by the practice of self-love and kindness to others. Oprah Winfrey invited Ms. Williamson on TV, telling her audience, “I have never been as moved by a book as I have by Marianne Williamson’s book.”

It was the first of 13 books Ms. Williamson has published so far, a catalog that also includes “The Law of Divine Compensation,” for professionals; “A Course in Weight Loss,” for dieters; and “A Woman’s Worth,” for women.

Ms. Williamson says she briefed Ms. Winfrey on her plan to run for president, but declined to reveal Ms. Winfrey’s response. “I’ve had a personal conversation with Oprah and I wouldn’t share, I never have. And I never will share the nature of my personal conversations with her,” Ms. Williamson said. “But I have mentioned that I’m running.” (Ms. Winfrey, who hosted an interview in February with the candidate Beto O’Rourke, did not respond to a request for comment.)

The 2020 election isn’t the first time Ms. Williamson’s theories on life have brought her in conversation with international leaders — dead or alive. On one 1994 trip to Camp David, Ms. Williamson reportedly communed with the spirit of Eleanor Roosevelt at the invitation of Bill and Hillary Clinton.

Ms. Williamson said that her conversations as a spiritual counselor are confidential. She also considers some details about herself to be confidential; she has never publicly disclosed, for example, the father of her 29-year-old daughter, India Williamson, who has worked on her mother’s campaign. (She does occasionally disclose her daughter’s medical information, however, calling on followers to send prayers, reiki and healing energy when India contracted tonsillitis in 2011.)

But Ms. Williamson has long been thought of as a stateswoman, in a way. One of her famous quotes from “A Return to Love” — “Our deepest fear is not that we are inadequate. Our deepest fear is that we are powerful beyond measure” — is so often mistakenly attributed to Nelson Mandela that the late South African leader’s foundation was compelled to post an online correction in 2007. (In 2018, Meghan Markle, the Duchess of Sussex, read the properly attributed selection alongside Prince Harry at a St. Luke’s Church Christmas carol concert to benefit Ugandan schoolchildren.)

Actually becoming a stateswoman has proved harder. In 2014, buoyed by $2 million in cash, a theme song written for her by Alanis Morissette and endorsements from yoga enthusiasts like Dennis Kucinich and Deepak Chopra, Ms. Williamson ran for California’s 33rd Congressional seat. She came in fourth, with about 13 percent of the vote.

A political campaign is also a chance to exhume everything a candidate has said in her career, from all the tweets to exactly what she meant 30 years ago when she called herself a “bitch for God” at a charity event.

“I think it’s fair to say I wish I had never said that. Something was going on many years ago, in a situation that had to do with some AIDS patients. I would open my course with a prayer. There was something we were doing, and somebody was saying, ‘Marianne, I don’t think we should open with a prayer.’ And I said, ‘No, I think we should open with a prayer.’ And I was getting all this resistance to opening with a prayer. And they said, ‘You’re being a real bitch about this.’ And I said, ‘If I’m a bitch, I’m a bitch for God,’” Ms. Williamson said. “I think it was something about fund-raising, and some very chic people in Manhattan who were going to be there. And I just took umbrage at the idea, whatever.”

Her call for reparations, maybe the most radical yet timely point of her policy proposals, isn’t new to her either. She has been talking about it since the publication of her mid-1990s book, “Illuminata,” and she says that without it, America’s racial and economic divide will never heal.

Ms. Williamson began leading what she describes as “public ritualistic apologies from white people to black people,” after witnessing a charismatic priest named Father DiOrio lead a room of Catholics in a round of apologies to the non-Catholics for anything they or a member of the church had ever done to hurt or offend.

“It was one of the most emotional experiences I ever had,” Ms. Williamson said. She believes the country could benefit from a national workshop.

It’s a tactic she’d like to deploy internationally too.

“If I were president, the world would know that America’s greatest ally is now humanity itself. What’s happening among the Israelis and the Palestinians is that two peoples with very conflicting historical narratives are sharing the same piece of land. And something which they both know, that sometimes I feel too many Americans don’t seem to realize, neither one is leaving. There was a Palestinian peace activist nonviolent who I once heard say, when two victims were in the same room — and let’s be clear, both have been victimized — somebody, he said, is going to have to give up their victim story. As someone who has done not only individual counseling but couples counseling, for 35 years, and organizational counseling, I feel I bring a skill set to that issue beyond what anyone else will bring,” Ms. Williamson said.

When it comes to America’s own interpersonal relationships, however, Ms. Williamson would like to see the women — especially the women who support Donald Trump — see themselves as protectors against a threat.

“In every advanced mammalian species that survives and thrives, a common anthropological characteristic is the fierce behavior of the adult female of the species when she senses there is a threat to her cubs; bears, tigers, lions, in the adult female hyenas, the cubs, while they’re feeding, will not let the adult males get anywhere near the food until the babies have been fed,” Ms. Williamson said. “Surely, the women of America could do better than the hyenas.”

Even more!
Who’s Running for President in 2020?
Who’s in, who’s out and who’s still thinking. 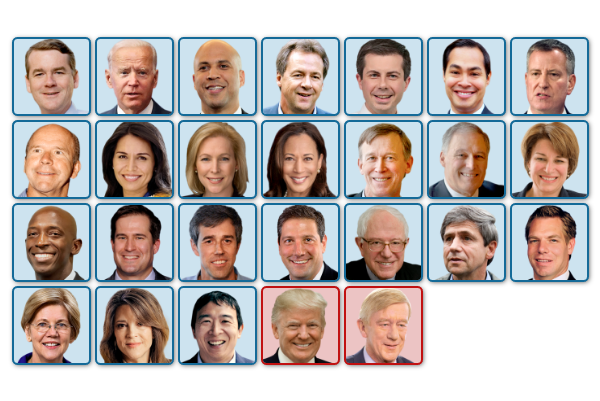 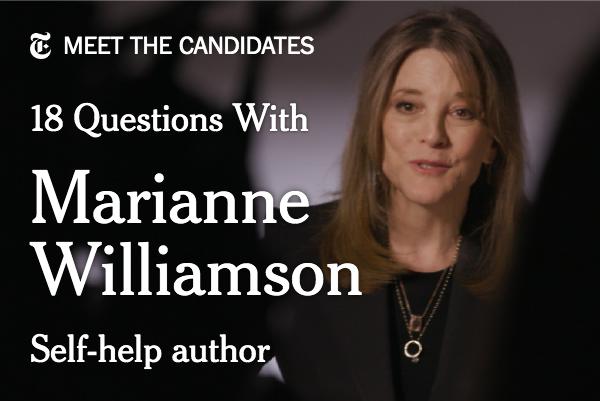 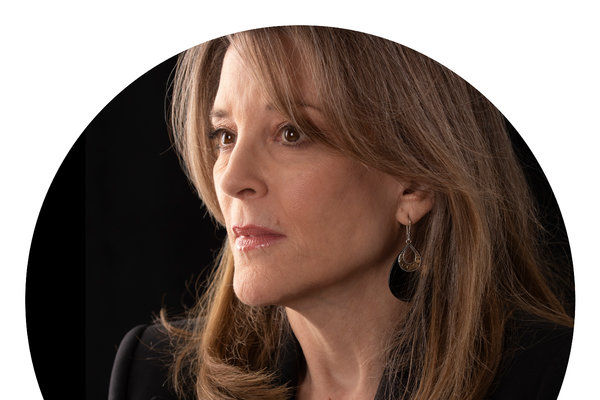