Just this week, we started seeing more concrete proof of what the upcoming Huawei Mate 30 Pro could look like. On Tuesday, we saw a centered rectangular cutout which suggested a square camera setup like on the Mate 20 Pro. Then, just yesterday we saw an alleged pane of glass from a not-so-revealing angle with very deep curves around the edge of the phone.

Today, a few new images of the alleged display panel for the Mate 30 Pro have leaked from Weibo. This time, we get a closer look at the panel that includes a notch cutout. The Mate 30 Pro was initially rumored to have a hole-punch cutout, but Huawei could plan to bring back its 3D face unlock feature to the next Mate 30 Pro. The hole-punch is still entirely possible for a non-Pro Mate 30 model. 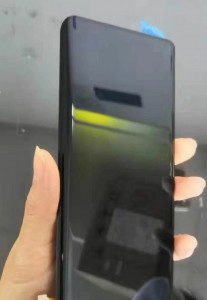 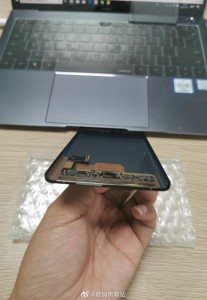 Assuming the center hole is for an in-call speaker, it has the same number of openings as the Mate 20 Pro. The overall thickness of the notch appears slimmer and the bezel above the notch, but the display seems to pour over the edges of the glass, thus creating the illusion of no side bezels.

Based on these leaked images, it looks like we can still expect to see an in-display fingerprint scanner so users could have a choice between face authentication or a fingerprint.

Should this be the real Mate 30 Pro display panel and the tolerances are tight enough, we might expect the display glass to almost seamlessly blend into the rear panel of glass. This would mean there could no longer be edges of the frame to grab on to. It will be interesting to see if Huawei will still have a tiny bit of frame to place physical buttons or if Huawei has other plans for this.

As per yesterdays leaks, the Mate 30 Pros OLED display is said to have a 6.71-inch display, presumably with a QHD+ resolution. It was also said the display could have a smoother 90Hz refresh rate.

Other rumors include the next-gen Kirin 985 CPU and a Balong 5000 5G modem. We are also expecting a 4,200 mAh battery with 55W charging and support for 10W reverse wireless charging.