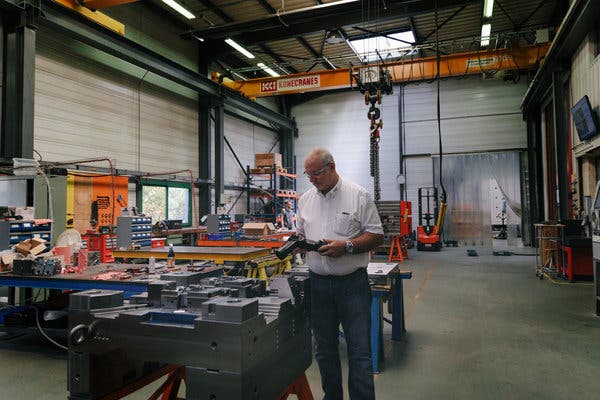 OYONNAX, France — Along a vast alpine plain, hundreds of factories are cranking out plastic perfume bottles, automobile parts and industrial tools. Trucks chug through mountains ferrying thousands of ready-made wares for export. On billboards and warehouses, “We’re hiring!” signs flutter in the breeze.

Jobs are plentiful in Ain, a sprawling manufacturing region in eastern France known as “Plastics Valley.” But companies in this forested frontier across from Switzerland have slowed production because they cannot find enough workers for a production line that increasingly requires computer and digital know-how.

“It’s a brake on competitiveness,” said Georges Pernoud, the president of Groupe Pernoud, whose company makes injection molding for plastic parts for BMW and other automakers. He said he has turned away contracts worth nearly a million euros in the past two years because he couldn’t find skilled people here or anywhere in France who wanted a factory job.

“We need more tech-savvy employees,” Mr. Pernoud said, pointing to a glass-encased robotic machine on his factory floor programmed by a worker to produce a precision steel mold. “But not enough people are willing to take these jobs.”

France, like many countries in Europe, has a labor problem. But in a nation where thousands of people took to the streets in the Yellow Vest movement to protest income inequality and a lack of economic opportunity, there is a peculiar twist.

Despite an unemployment rate of over 8 percent — the highest in Europe after Italy, Spain and Greece — over a quarter of a million jobs are unfilled. Businesses can’t find people to work as plumbers, engineers, waiters, cooks. The list goes on.

Nowhere is the challenge as stark as in manufacturing, where nearly 40 percent of companies cite a dearth of manpower. In Ain, which specializes in making plastic goods and machinery parts, at least 18,000 jobs are on offer.

France needs a solution quickly. After recovering from a double-dip recession during the financial crisis, the economy is slowing again, this time from a 1.7 percent expansion as Europe’s recovery cools. Manufacturing isn’t contributing as much to growth as it could because of the labor problem, Agnès Pannier-Runacher, France’s economy minister, has warned.

She recently began a campaign to enhance the industry’s appeal, featuring a 20-foot inflatable plastic rooster, a symbol of French pride. The rolling caravan, called the “French Fab” tour, showcases factories as hubs for high tech.

Employers say manufacturing has an image problem after decades of cheap competition from Asia and Eastern Europe shuttering factories across France. The industry has shrunk to 10 percent of the economy today from 25 percent in the 1960s. Recent factory closures at Ford, Alstom and Whirlpool have added to an image of woe.

Labor unions say the issue is not a shortage of workers, but that companies pay low wages and then complain about a lack of labor. If companies increased pay, unions argue, they would find employees.

“The real problem is that French industry is still not as modernized as elsewhere in Europe,” said Patrick Artus, the chief economist of Natixis Bank, based in Paris. “That has lead to low productivity, which prevents companies from raising salaries,” he said. Manufacturers need to ramp up investments, he added.

President Emmanuel Macron is trying to clear roadblocks, in part by modernizing the national vocational system. Only around a third of French students pursue vocational training or apprenticeships, which are seen as leading to unprestigious work in a country that prizes academics and white-collar careers.

By contrast, in Germany, Europe’s manufacturing powerhouse, the industry is seen in a positive light. Around half its 16- to 24-year-olds enter apprenticeships that include hands-on work at Siemens, Daimler and other name brands. In France, manufacturers say, the training is less intensive and no longer produces enough people with skills for the current crop of jobs

Mr. Macron’s reform lifts the age limit for apprenticeships to 30 from 25 and makes it easier for people to qualify for and keep them. The government also plans to reimburse companies for apprentice work contracts. One million low-skilled job seekers and one million young people from disadvantaged backgrounds will be offered training in digital technologies. France’s generous jobless benefits are being tightened to return people to the work force more quickly.

But in Ain, and elsewhere, the efforts aren’t producing results fast enough.

This area became a hub for plastics-making in the 1920s when companies made fashionable combs and hair accessories. Activity expanded after World War II as demand for plastics, tools and machinery drove a surge in manufacturing.

Oyonnax, one of Ain’s biggest cities, grew wealthy as the factories expanded. In the early 1980s, locals recall, the largest concentration of Ferraris in France was found here.

But French industry proved no match for globalization and did not adjust to competition from countries with lower labor costs and tax rates. Europe’s financial crisis forced companies to modernize quickly. French factories are now scrambling for programmers and coders to run increasingly automated machinery. “We’re struggling to convince people that the work isn’t the same as decades ago,” said Damien Petitjean, the director of the Lycée Arbez Carme, the main high school in Oyonnax.

The plastics industry in particular faces a hard sell, said Mr. Petitjean, as concerns mount over the environmental impact of a throwaway culture.

The Oyonnax school once specialized in training for industrial jobs. In the 1970s, it shifted to a general curriculum, mirroring the decline of manufacturing. Today it has swung back to offering technical diplomas, working in partnership with companies and research institutes.

Yet only half its 1,100 students pursue such degrees, Mr. Petitjean said. And last year, only 40 entered the plastics industry.

Pay is one big reason.

“In France, employer taxes amount to 40 percent of a worker’s salary,” said Stéphane Vandenabeele, the managing director of UNT, which makes precision tools for eyewear and watches. He recently lost a skilled employee to a competitor in Switzerland that offered nearly twice the 2,800 euro after-tax salary he paid. With Swiss employer taxes of just 12 percent, he said, he couldn’t match the price.

Employers in Plastics Valley try, increasingly, to poach workers from other companies or devise creative workarounds.

Mr. Pernoud, the producer of plastics injection molds, hired a technician from Portugal to fill one of a dozen openings at his 110-person operation. Although he pays up to 3,000 euros a month for engineers, there are few takers. But that’s good money in Portugal, where the average monthly wage is around 1,900 euros, Mr. Pernoud said. He hopes to hire four more — quickly.

“I have no choice but to look abroad,” he said. “I can’t develop my business otherwise.”

Ten minutes away, PRP Creation, which makes plastic cosmetics containers for luxury groups including Dior, Chanel and Estee Lauder, has found a partial solution by placing job ads on Facebook, Twitter and LinkedIn.

The chief executive, Joël Viry, said many of the 175 jobs on his floor are on a classic production line. He attracted workers by establishing good managerial relations. The son of a boilermaker, he regularly walks the floor to converse with employees, who include older workers and over 30 nationalities. At any given time, at least 40 young people on interim contracts work in the factory to gain experience.

Other companies, worried that government reforms will take time, are pooling resources to create their own training programs.

At LMT Belin, a producer of tools for the plastics, auto and aerospace industries, the chief executive, Bertrand Lefevre, teamed up with five companies to provide hands-on work experience for the unemployed. On a recent afternoon, eight young men trained on how to program robotic equipment, hovering over a machine churning out high-performance drill bits.

Mohamed El Hmidi, 23, had worked mostly in construction and at odd jobs. He landed in Oyonnax’s unemployment office a few months ago and heard about training at LMT Belin. He jumped at the opportunity.

“This is our future,” said Mr. El Hmidi, nodding at the factory floor, where workers were monitoring computer-powered machines. He had already rotated through the other four factories that had combined forces with LMT Belin. “Here, we’re getting exposure to new technologies,” he said.

For Mr. Lefevre, it was a small victory in a larger battle for economic survival.

“We can’t just keep complaining there’s no one to hire,” he said. “We have to make it happen ourselves.”