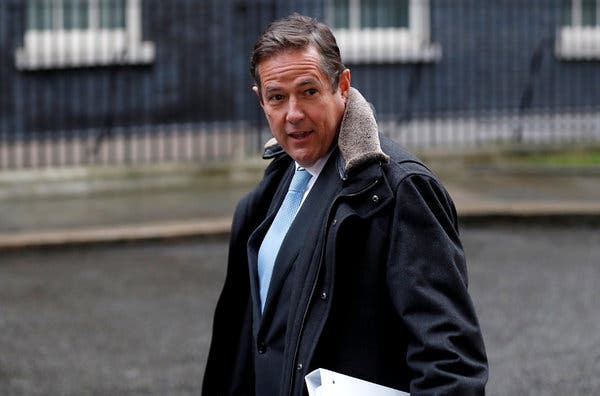 When Jeffrey Epstein was serving time in Florida for soliciting prostitution from a minor, he got a surprising visitor: James E. Staley, a top JPMorgan Chase executive and one of the highest-ranking figures on Wall Street.

Mr. Staley had good reason to maintain his relationship with Mr. Epstein, who received him at his Palm Beach office, where he had been permitted to serve some of his 13-month sentence in 2008 and 2009. Over the years, Mr. Epstein had funneled dozens of wealthy clients to Mr. Staley and his bank.

Mr. Epstein, who was charged this month with sex trafficking of teenage girls, liked to portray himself as a financial wizard, someone whose business and investing acumen made him indispensable to corporate executives and other leaders. But there is little evidence to support that notion. The financial services that Mr. Epstein dispensed appear to have been mostly pedestrian, and his list of clients small.

Mr. Epstein nonetheless managed to affix himself to a handful of prominent Wall Street veterans, including Mr. Staley, who is now chief executive of the British bank Barclays.

Mr. Epstein provided personal tax services to Leon D. Black, whose Apollo Global Management is one of the world’s largest private-equity firms. He discussed a major investment idea with and entrusted millions of dollars to Glenn Dubin, who ran the hedge fund Highbridge Capital Management. And, with Mr. Staley, he laid some of the early groundwork for JPMorgan to make a major acquisition — one that would vault Mr. Staley’s career to a higher plane.

In the weeks after Mr. Epstein’s arrest, it has become clear that he lied about the identities of some of his clients and the services he was providing, part of a successful effort to create the illusion of a sophisticated investor and management guru advising a who’s who of corporate America.

Mr. Epstein boasted of having advised Elon Musk after the Tesla founder’s impulsive Twitter posts sent shares plummeting last summer. He has claimed to have worked closely with Lawrence Summers, the former Treasury secretary and Harvard president. He has told others he was a tax consultant to the Microsoft co-founder Bill Gates. Representatives for the three men told The New York Times that there was no truth to Mr. Epstein’s statements.

A decade ago, he tried to woo Nicholas and Thomas Pritzker, two scions of the family that created the Hyatt Hotel chain, by inviting a top scientist in the field of virtual reality to meet them in New York, according to a person who attended. He contended that billionaires like the Pritzker family needed his advice because he had special insights that could translate the ideas of mathematicians into workable financial strategies. The Pritzkers never considered working with him, according to a person close to the family.

Some of the investment ideas he trumpeted to would-be clients appeared far-fetched. One supposed strategy was to constantly make overnight loans to banks around the world. (There is no sign of Mr. Epstein having actually made any such loans, and it is hard to imagine such a strategy generating substantial profits, since overnight loans generate minuscule interest rates and last for only a matter of hours.)

Yet starting in the 1990s, Mr. Epstein — whose Wall Street experience consisted of a five-year stint at the investment bank Bear Stearns — managed to build a small but powerful finance network.

Mr. Black, the Apollo founder, was a widely respected figure on Wall Street when he met Mr. Epstein in the late 1990s. Before long, Mr. Black had entrusted Mr. Epstein with periodically providing a variety of tax and estate-planning services, according to a person close to Mr. Black. It was an unlikely assignment: Armies of lawyers and accountants have expertise in those fields; Mr. Epstein did not.

Over the next 15 or so years, including after Mr. Epstein pleaded guilty to prostitution charges in 2008, Mr. Black met with Mr. Epstein at his palatial townhouse on Manhattan’s Upper East Side, according to people who were there.

Mr. Black also put Mr. Epstein on the board of his family’s main foundation in 2000. According to public charitable filings, he remained on the board of the Debra and Leon Black Family Foundation until 2012, although a spokeswoman for the foundation, Carolyn Sargent, said he actually resigned in 2007.

In 2011, Mr. Epstein invested in a small publicly traded company, Environmental Solutions Worldwide, along with Mr. Black and his four children. And in 2015, an investment vehicle owned by Mr. Black contributed $10 million to a charity that Mr. Epstein started after his Florida incarceration, according to tax documents and a person familiar with the transaction.

In the clubby world of Wall Street, one connection often begets another, and Mr. Epstein around 1999 connected with Mr. Staley — one of Mr. Black’s good friends. Mr. Staley at the time was running JPMorgan’s private bank, which caters to wealthy individuals and where Mr. Epstein was a client.

Mr. Epstein and Mr. Staley soon became friends, and Mr. Epstein began referring rich individuals to Mr. Staley, who over the next decade converted dozens of those referrals into clients of JPMorgan’s private bank, according to a person with knowledge of the relationship.

One introduction proved especially valuable: Mr. Epstein connected Mr. Staley with Mr. Dubin, who at the time was running Highbridge, one of the country’s largest hedge funds, according to people familiar with the relationship. Mr. Epstein knew Mr. Dubin because he had once dated Eva Andersson, before she married Mr. Dubin.

A few years later, in 2004, Mr. Staley orchestrated a deal in which JPMorgan bought a majority stake in Highbridge. Mr. Dubin, and the Highbridge co-founder Henry Swieca, became JPMorgan employees. It is not clear whether or how Mr. Epstein was compensated for helping broker that deal.

“Mr. Staley has never engaged or paid fees to Mr. Epstein to advise him, or to provide professional services, either in his various roles at JPMorgan, or personally,” said Stephen Doherty, a spokesman for Barclays, Mr. Staley’s current employer.

The Highbridge deal helped elevate JPMorgan’s asset-management division — which at the time was under Mr. Staley’s leadership — into a major player in the fast-growing hedge fund world, and it cemented Mr. Staley’s role in the bank as an up-and-comer. (Mr. Swieca left the bank in 2009, and Mr. Dubin left in 2013.)

Mr. Epstein, meanwhile, invested $10 million in Highbridge through a financial consulting firm he owned in the Virgin Islands. He withdrew the money — which by then was worth about $30 million — from Highbridge in 2013, around the time that Mr. Dubin stepped down from the hedge fund.

Mr. Dubin has described Mr. Epstein as a friend and has provided him with financial advice. On one occasion, in the early 2000s, he recommended that Mr. Epstein invest in a new hedge fund run by Daniel Zwirn. Mr. Epstein invested up to $80 million via his consulting company, Financial Trust, according to court papers. At its peak, the investment was worth $140 million.

Mr. Dubin and Mr. Epstein parted professional ways after Mr. Zwirn’s fund shut down and Mr. Epstein sued, according to a person close to Mr. Dubin. The two men, however, continued to socialize, with Mr. Epstein joining the Dubins at their Palm Beach, Fla., home for a large Thanksgiving celebration in 2009, according to an email that Ms. Dubin sent to Mr. Epstein’s probation officer. The letter was first reported by Business Insider.

Ellen Davis, a spokeswoman for Mr. Dubin and his wife, said that the “Dubins are horrified by the new allegations” against Mr. Epstein. The statement added, “Mr. Dubin’s business relationship with Mr. Epstein, which ended more than a decade ago, was extremely limited. The Dubins were loyal friends and mistakenly believed Mr. Epstein, a person they had known for decades, had rehabilitated himself after his 2008 plea and deserved a second chance.”

Mr. Staley and JPMorgan, too, stuck with Mr. Epstein for years after his guilty plea — a period in which, according to prosecutors, Mr. Epstein engaged in an extensive sex-trafficking operation. It wasn’t until around 2013, when Mr. Staley left JPMorgan, that Mr. Epstein ceased being a JPMorgan client.

Spokesmen for JPMorgan declined to comment on any aspect of their roughly 15-year relationship with Mr. Epstein.