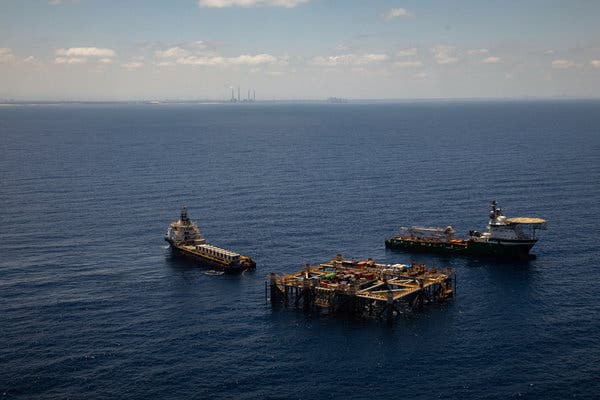 Now it has a different problem. Thanks to major offshore discoveries over the last decade, it has more natural gas than it can use or readily export.

Having plenty of gas is hardly a burden, and it offers a cleaner-burning alternative to Israel’s longtime power sources. But it presents challenges for a country that wants to extract geopolitical and economic benefits from a rare energy windfall, including building better relations with its neighbors and Europe.

Part of the problem is timing. Just as Israel prepares to produce and export large amounts of gas, the United States, Australia, Qatar and Russia are flooding the market with cheap gas. The other is math: Israel’s 8.5 million people use in a year less than 1 percent of the gas that has been found in the country’s waters.

“We have a surplus of gas,” Energy Minister Yuval Steinitz said in an interview. “Israeli waters are swimming in gas, and what we have discovered is only the beginning.”

Noble Energy, a Houston-based company that made its first discovery of gas in Israel in 1999, has found more than 30 trillion cubic feet of gas off the country’s coast over the last decade. Some experts say new discoveries could double that.

As a result, Israel is phasing out diesel and coal-fired electricity, replacing it mostly with gas-fired generation and some solar power. Prime Minister Benjamin Netanyahu’s cabinet is considering banning the import of gasoline and diesel cars starting in 2030 and gradually switching to vehicles fueled by compressed natural gas or electricity.

Israel is also stepping up exports to neighbors like Jordan and Egypt. There are even plans to supply gas to a power plant in the West Bank for Palestinian customers.

Yet these efforts will make only a dent in the country’s reserves.

“We want to export,” said Jacob Nagel, former head of Israel’s National Security Council. “The question is: How much will it cost? Is it possible? How much time will it take?”

For decades, Israel depended on Russia and other sources for fuel, while its industries and homes relied on coal and oil power plants that blanketed its cities with smog. The switch to gas has helped clear the air in cities like Tel Aviv and Haifa that have converted diesel-fueled plants.

Israel’s biggest coal plant — in Hadera, a coastal city — will be converted over the next three years, cutting national coal consumption by 30 percent. Officials say they expect to eliminate coal use in 11 years.

In Hadera, improvements are already noticeable after gas replaced oil in one part of the plant and officials installed a scrubber, an exhaust-cleaning device. The beach is no longer caked with sticky black tar, and a yellowish tinge on the horizon is gone.

Guy Stansill, a 38-year-old vegetable farmer at the nearby Sdot Yam kibbutz who can see the plant’s chimneys from his kitchen window, hopes it’s for good. His 5-year-old son, Tayo, has asthma but is breathing better now that the plant is reducing its emissions.

“Reducing the coal industry will be better for the air and health,” he said, though he worries about a possible spill from drilling and gas processing offshore.

But his wife, Lee Kush, thinks the country ought to be investing more in renewable energy. “We have so much sun,” she said. “Why use gas at all?”

Israeli officials acknowledge that the gas will compete with cleaner solar energy. But they argue that the plentiful supply of electricity from gas-fired power plants will encourage the use of electric vehicles, reducing pollution.

The Israeli government says it is committed to the Paris climate accord, and is close to getting 10 percent of its electricity from renewable sources by next year. Environmentalists say the country could do better.

The Leviathan field, Israel’s largest, will be connected to the mainland by pipeline by the end of the year, and that should speed the use of gas in transportation, which has been minimal so far. Fifteen garbage trucks in Haifa are running on compressed natural gas. The country has imported 59 such buses from China, and has ordered another hundred or so.

But because it has a small industrial base and its residential use of gas is limited because of mild winters, Israel needs to export more to take advantage of its energy bounty.

There are many hurdles.

Last year Noble and the Israeli company Delek Drilling signed a 10-year deal to deliver gas to Egypt by pipeline beginning later this year. Some of that fuel may be re-exported from two Egyptian terminals.

Energy executives say they are optimistic that Egypt’s growing population, now 100 million, will make it a big market, and that gas can bring the two neighbors closer even as Egypt, with its own recent large-scale finds, becomes a bigger producer.

The importance of the Egyptian market was underscored by a trip to Cairo in January by Mr. Steinitz, the first official visit by an Israeli minister since the 2011 unrest that shook the Arab world. He and representatives of five other Mediterranean countries and the Palestinian Authority had met to form an association to coordinate regulations on gas pipelines and trading.

Still, officials acknowledge that doing business with Egypt is risky. A gas pipeline between the countries was sabotaged in 2012.

Israel could seek to sell gas to Asia, where demand is growing, but public opposition has blocked plans for an export terminal on the small, densely populated shoreline.

That leaves pipelines as the best option.

Israeli policymakers long favored a proposal to build a pipeline to Europe through Turkey. But relations with President Recep Tayyip Erdogan have deteriorated in recent years, closing that option, at least for now.

The most ambitious proposal is to build the world’s deepest and longest gas pipeline, to Italy through Cyprus and Greece. That project has the support of the European Union, Cyprus and Greece, but investors are reluctant to invest the estimated $6 billion to $7 billion it would cost.

“There is a question mark on the financials of this pipeline and the returns for its shareholders,” said Mathios Rigas, chief executive of Energean, a Greek energy company that produces gas off Israeli shores.

Mr. Rigas said he favored building a terminal in Cyprus connected to Israeli and Cypriot fields. But that would be costly and take up to a decade. It would also probably face opposition from Turkey, which is drilling in waters claimed by Cyprus.

But some Israeli experts doubt that the country will become a big exporter and would be happy to see the gas remain at home.

“I don’t see anything wrong with leaving the gas for future generations,” said Gal Luft, a former Israeli military officer and an energy expert. “We’re talking about deepwater gas in the most volatile region in the world. So let’s be humble.”