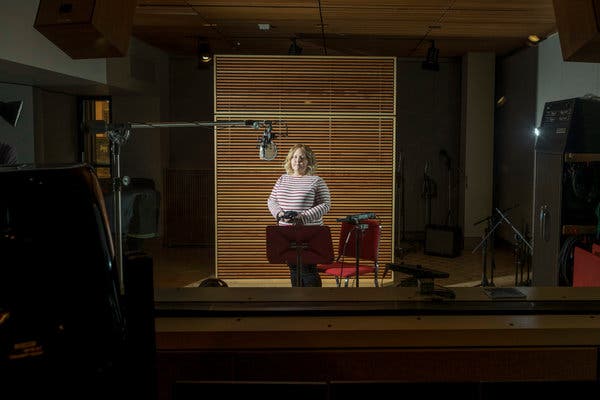 ST. PAUL — On a fall day in 2015, Madeleine Baran and Samara Freemark went for a walk through the extensive skyway that threads through the buildings of downtown St. Paul.

They were new colleagues at APM Reports, a division at American Public Media where investigative reporters and radio producers had been “smushed together,” as its editor in chief, Chris Worthington, put it.

Strolling above the city, Ms. Baran and Ms. Freemark talked about ideas for their first project. Ms. Baran, a reporter who had grown up mainly in Milwaukee, had lived in Minnesota long enough to be familiar with the case of Jacob Wetterling, an 11-year-old who had been abducted from the nearby town of St. Joseph in 1989. How, she wondered, had the crime gone unsolved?

Ms. Freemark, an audio producer from Durham, N.C., said the story might lend itself more to a podcast than to a radio documentary. The megahit first season of “Serial” had recently completed its run, proving there was an audience for an audio project that unspooled over many episodes. Ms. Baran agreed.

“Having worked in regular public radio, you have a lot of limitations,” Ms. Baran said recently, citing the standard lengths of a radio story (four minutes) and an audio documentary (an hour). “This serialized format — really long form — was the best type for investigative reporting.”

About two weeks later, they got official approval, and “In the Dark” was born. Four years later, the podcast has completed two seasons, its episodes downloaded about 50 million times. Along the way, it received a Peabody Award and became the first podcast to win a George Polk Award, one of investigative journalism’s most prestigious prizes.

Although the show has so far examined criminal cases from decades ago, it has demonstrated a knack for contributing to prominent stories in recent news cycles.

Toward the end of the first season’s production, the man who had abducted and killed Jacob Wetterling confessed. And facts uncovered by the “In the Dark” team during the second season, which delved into the case of Curtis Flowers, a man convicted and sentenced to death for the murders of four people in Mississippi in 1996, appeared in amicus briefs filed to the Supreme Court. Last month, the court ruled, 7 to 2, that the district attorney in the case had violated the Constitution.

“In the Dark” is at once part of a wave of cold-case podcasts and a subversion of the genre. Its creators seem to recoil from the classification of “true crime.”

“However anyone comes to the podcast, we’re glad they’re there,” Ms. Freemark said. “But how we would describe our work is investigative reporting on the criminal justice system.”

Before becoming a podcast producer, Ms. Freemark worked at the “Radio Diaries” program in New York. That program, with amateurs recording their own stories, was a sandbox for an audiophile like her — “non-narrated, really sound-rich, immersive audio documentaries,” she said.

While honing a recent episode of “In the Dark” behind soundproof doors, Ms. Freemark, whose title is senior producer, displayed the tendencies of an editorial perfectionist. She paced the control room, punching the air in time with changes in the background music, editing a stray “like” out of a reporter’s question and frequently asking the mixer to move a sound clip two-tenths of a second forward or back.

Ms. Baran, the no-nonsense reporter who hosts the show, resisted the podcast convention of introducing herself by name at the start of each episode. (Ms. Freemark had to talk her into it.) After considering a career in social services, she joined Minnesota Public Radio in 2009 as a part-time web writer. Within a year, she had a full-time job, and later was the lead reporter on “Betrayed by Silence,” a Peabody-winning audio documentary that exposed a cover-up of abusive priests by the Twin Cities’ archdiocese.

At the conclusion of the first season of “In the Dark,” Ms. Baran put out a call to listeners for Season 2 story ideas. Thousands of suggestions came via email and social media. One, sent by a woman in Mississippi, seemed especially promising: a simple message claiming that Mr. Flowers had been tried six times for the same crime. The woman added that she believed he might be innocent.

When the “In the Dark” team confirmed that Mr. Flowers had indeed been tried repeatedly for the killing of four people in a furniture store in Winona, Miss. — and sentenced to death after the sixth trial — they had more questions. How could this happen? And what did it say about the intersection of race — Mr. Flowers is black — and the American criminal justice system?

Ms. Baran, 39, moved to Mississippi to report the story and stayed there almost a year. She was joined by others on the five-person “In the Dark” team, as well as some from the wider APM Reports newsroom. Ms. Freemark, 38, who has two young children, spent roughly 10 days a month there as the saga unfolded. For much of the time, the “In the Dark” base was Water Valley, a town about an hour’s drive north of the murder site.

The reporters and producers attended church services and watched the Winona High School football team advance to the state title game. Little by little, through extensive interviews and the scouring of public records, they gathered enough material to construct a story sturdy enough to last a full season.

Doug Evans, the district attorney who prosecuted Mr. Flowers, emerged as a crucial character, although he granted just a single 11-minute interview. On advice of his attorneys, Mr. Flowers did not speak with “In the Dark.”

The main episodes of Season 2 — each around an hour long, in the manner of prestige television — were released once a week. The team later recorded postscript episodes to incorporate the Supreme Court decision and other new reporting.

“In the Dark” was studded with literary details, including the grace note that Winona was the town where Emmett Till arrived by train on his fatal trip in 1955. The show also included heartbreaking interviews with Mr. Flowers’s father and a recording of John Johnson, the main investigator for the district attorney, singing a Merle Haggard number while backed by the husband of one of the murder victims.

The podcast poked holes in the forensic evidence and raised questions about an informant who said Mr. Flowers had confessed to him. In the latest episode, released this month, it also shredded the alibi of a second suspect.

In a virtuosic feat of reporting, which would prove relevant to the Supreme Court case, “In the Dark” studied 6,700 jurors over 25 years of Mr. Evans’s tenure and found that prosecutors in the district, which is 40 percent black, were four times as likely to strike black jurors as white ones. In the six trials for Mr. Flowers, 61 of the 72 jurors were white.

The Supreme Court effectively ordered the Mississippi Supreme Court to overturn the conviction, ruling that Mr. Evans’s conspicuous striking of black jurors violated the Constitution. The job of writing the majority opinion fell to a newcomer, Justice Brett M. Kavanaugh. “Equal justice under law requires a criminal trial free of racial discrimination in the jury selection process,” he wrote.

In a dissent, Justice Clarence Thomas appeared to refer to “In the Dark,” writing, “Perhaps the court granted certiorari because the case has received a fair amount of media attention.” (The Flowers case had also been featured on a Starz documentary series.)

Rachel Monroe, an author who studied the true-crime genre for her upcoming book, “Savage Appetites,” said “In the Dark” was different from the blockbuster first season of “Serial.” While that deep dive into a 1999 murder kicked off the true-crime podcast boom (and, arguably, the narrative-podcast industry), “In the Dark” focuses on larger issues.

“The subject is not so much Curtis Flowers, although he is the occasion for the podcast,” Ms. Monroe said. “It’s taking a close look at the criminal justice system.”

In a rare monologue delivered at the close of Season 1, Ms. Baran was critical of nonfiction crime narratives that miss the big picture.

“All these TV shows, books and movies,” she said, “about impossible cases, cold cases, unsolved mysteries, people who vanished without a trace — all that has turned our attention away from the actions of law enforcement, away from asking tough questions of the people who are supposed to be solving these crimes.”

Now Ms. Baran, Ms. Freemark and their colleagues are sifting through story ideas for a third season. But they have also pledged to track whatever happens next to Mr. Flowers, who remains in the infamous Mississippi State Penitentiary in Parchman.

“I think things are going to get really interesting from this point on,” Ms. Freemark said.