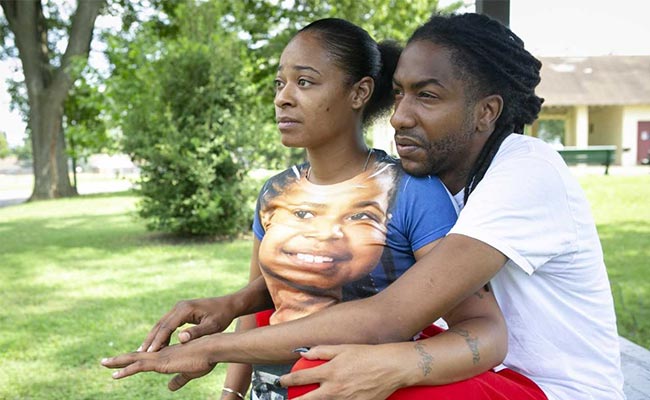 Outrage was still rising Tuesday when Levar Stoney received the text message from his police chief.

The mayor of Richmond had spent the morning speaking to crowds outside the state Capitol ahead of a special legislative session on gun control. He’d invoked the victims of a May 31 mass shooting in Virginia Beach and urged lawmakers to pass “common sense” gun laws.

“There is an opportunity to do right,” he’d said. “That day is today.”

Instead, the Republican-controlled legislature had adjourned after 90 minutes without considering a single bill.

Then, as Stoney, a Democrat, attended an event that afternoon on traffic safety, his phone buzzed with another one of the messages that, in his 18 months on the job, he’d learned to dread.

A pregnant woman had been shot in south Richmond, barely five miles from the Capitol, Police Chief William Smith texted. It was unclear whether she’d survive.

“My heart just dropped once again,” Stoney said. “These are the hardest messages to receive. Not only are you talking about the woman’s life, but you’re talking about the life of the child or the pregnancy that was endangered. It’s a lot.”

Republicans’ decision to postpone debate until after the November election enraged Democrats and disappointed gun control advocates, who saw the special session – called by Gov. Ralph Northam, a Democrat, in the wake of the Virginia Beach massacre – as an opportunity to end decades of deadlock.

Republicans dismissed Northam’s move as “political theater” designed to divert attention from his blackface scandal. The governor responded by saying that “an average of three Virginians die each day due to gun violence. That means hundreds of Virginians may die between today and November 18, the next day the legislature plans to work.”

Some of those killed will be in Richmond, which is in the midst of a bloody summer that began with a 9-year-old felled by a bullet as she waited to ride a pony in a public park.

“I lost my baby to this,” said the girl’s father, Mark Whitfield, who’d gone to the Capitol for the debate and was angry about legislators’ inaction. “If it was one of these people losing somebody, they’d do something about it.”

Less than two hours after the lawmakers adjourned, gunfire ripped through a courtyard at Lafayette Gardens, an affordable-housing complex next to the train tracks in south Richmond.

A pair of sisters, 2 and 3 years old, ran to their second-story apartment window to see what they thought were firecrackers, like a few days earlier on the Fourth of July.

Instead, the pregnant woman lay on the ground, screaming, with a bullet through her leg.

The girls’ mother pulled them away from the window as smoke from the gunshots – fired from just below their front door – filled their living room. Police swarmed the complex as the critically injured woman was rushed to VCU Medical Center, where she and her baby were stabilized. Police have not released her name or made any arrests.

When neighbors eventually poked their heads out of their apartments, they found a pool of blood where the woman had fallen. Bullets scarred the walls and had punched holes clean through a metal staircase. Across the courtyard, where the gunmen had stood, residents found roughly a dozen large-caliber shell casings.

Residents said the shooting is one of several in the apartment complex in recent months.

“Someone was shot in front of the rental office” in May, said Danique Oliver, 24.

Lafayette Gardens management did not reply to requests for comment. Police were unable to immediately provide a list of recent calls for service to the complex.

Richmond, a city of 230,000 that is carved in half by the James River, has long struggled with gun violence. Homicides soared in the late 1980s and 1990s as the city – like many – was ravaged by crack cocaine.

But the city is still menaced by criminals with illegally obtained guns.

“Some of them come from burglaries, some come from thefts from motor vehicles and some come from straw buyers: people who are allowed to buy them but then illegally transfer them to felons,” Smith said. Although the vast majority of guns seized by police come from the Richmond region, officers have recovered some from as far away as Michigan and Alabama, he said.

Firearms from Richmond and other parts of the state also flow to D.C., where officials say the number of guns seized and traced to Virginia has increased in recent years, totaling nearly 600 in 2018.

Last year, 284 people were slain with a firearm in the Old Dominion, according to state police, down slightly from 302 in 2017. But many people also use guns to kill themselves. In 2017, more than 1,000 Virginians died from some form of gun violence – more deaths than those caused by motor vehicle accidents.

Again and again, however, the state legislature has shied away from imposing new restrictions on access to guns.

In 2007, when a gunman at Virginia Tech killed 32 people and himself, then- Gov. Tim Kaine, a Democrat, created a blue-ribbon review panel to study legislative solutions. Lawmakers adopted mental-health reforms and other recommendations but balked at tighter gun controls.

Kaine, now a U.S. senator, said he was furious when Republican state lawmakers said Tuesday that a similar panel would be a better response to the mass shooting in Virginia Beach than a special session.

“That was a laughable attempt to disguise their own lack of a backbone,” he said. “I can tell you what they’ll do if a panel recommends common-sense gun control. They’ll ignore it.”

Kaine, who was a councilman and then mayor of Richmond in the 1990s when the city’s per capita homicide rates were among the nation’s highest, said gun violence is a public-health epidemic that goes beyond mass shootings.

Five days before the incident in Virginia Beach, a 9-year-old girl named Markiya Dickson was shot to death in Richmond.

On the Sunday of Memorial Day weekend, Markiya’s father, Mark Whitfield, took her to a fair at a park in south Richmond so she could ride the ponies.

She was his “monkey in the middle” – the second of three children – with a wide smile who loved to imitate her dad’s rap videos by dancing and singing on YouTube. When it was time to leave the fair, the third-grader ran into a friend and begged her dad to let them do one more ride.

Five minutes later, a group of young men with handguns began shooting at another man, who returned fire. Whitfield found his daughter lying on the ground, her favorite blue romper soaked in blood. A bullet had struck her in the chest.

“Right through the heart,” Whitfield said.

An 11-year-old boy was hit multiple times but survived. Markiya did not.

“We have a pretty good idea of what happened that day, and who was involved, but have some work to do before we have a prosecutable case,” Chief Smith said.

“They can’t prosecute without a witness,” Whitfield said. “We have no justice yet.”

Whitfield was among the crowd at the Capitol on Tuesday. It was his first time there, despite living only a few miles away. He arrived early in the morning, and after walking around the massive white-columned building, he waited in the gallery for the special session to begin. It was over before he understood what was happening.

“It was all for nothing,” he said.

Whitfield said that he is a gun owner and that he doesn’t support all the gun-control bills that had been introduced. But he supported an initiative, introduced by the mayor after Markiya’s murder, to ban firearms in city buildings and parks.

He wasn’t the only victim’s relative who was angry over the outcome.

Jason Nixon, whose wife, Kate, was among the 12 killed in Virginia Beach, said he was disgusted that delegates didn’t even discuss the bills, which included several stemming from the May 31 massacre.

“They went all the way to Richmond, had their high-dollar drinks and lunch and then did nothing,” he said. “It was an opportunity to have a debate. Instead, it was a waste of time and taxpayer money.”

“I’m embarrassed to be a Republican with what they did,” he said. “For them to take their ball and walk away, that’s embarrassing. Really? You can’t do better than that?”

The special session came and went without much notice at Lafayette Gardens, much like the shooting that occurred the same day. Within hours, maintenance workers bleached the blood from the hallway in front of Apartment B, although they missed a bloody fingerprint on the concrete. The crime scene tape was gone within a day.

The shooting victim could not be reached for comment. Notes left at her apartment went unanswered.

Neighbors said they were tired of the gunfire and eager to move.

“I don’t feel safe,” said Denise Roman. “Most of us live here because we don’t have much money.”

The 27-year-old single mother said she doesn’t let her 6-year-old son play outside. She wasn’t sure whether tighter gun controls would keep weapons out of her neighborhood.

“The shooting is ongoing, but it’s not normal,” Roman said. “Nothing about living here is normal.”

“I want to get the hell out of here,” added another woman, who spoke on the condition of anonymity out of fear of retaliation. Two months ago, police knocked on her door to say that someone had shot her car. She found a puncture right above the gas tank that cost her $600 to fix.

On Tuesday, she found her twin 7-year-olds talking about the shooting. They pointed to the scrapes in the hallway, marked gunshots “A” and “B” by police.