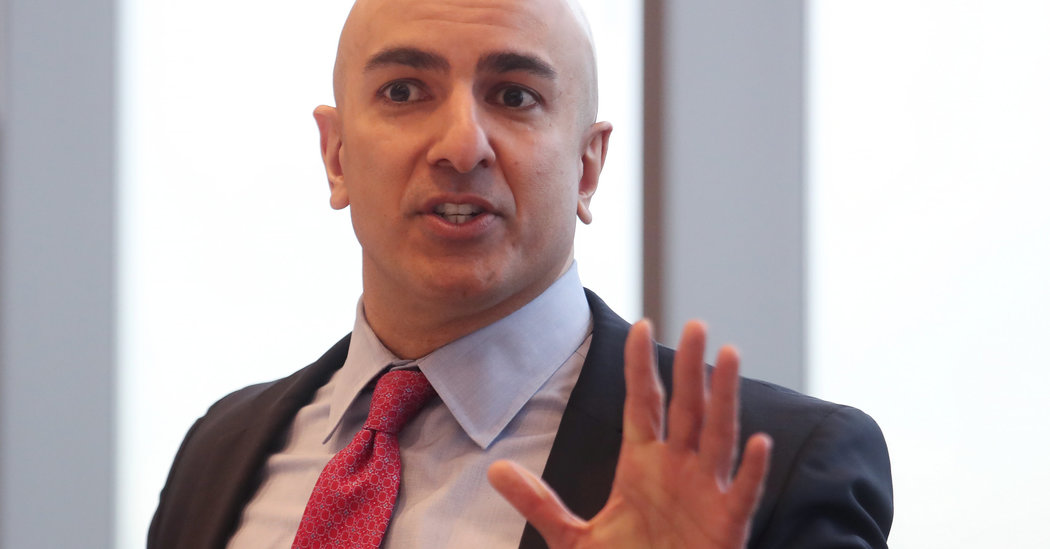 Federal Reserve officials on Friday outlined the case for an interest-rate cut, making clear in their first public remarks since the central bank chose to leave policy unchanged this week that inflation and rising global risks are weighing heavily on their minds.

Neel Kashkari, the president of the Federal Reserve Bank of Minneapolis, said in an essay posted online that he had pushed for a 0.5 percentage point rate cut at the central bank’s June meeting on Wednesday, motivated by worries that inflation was too low. Mr. Kashkari does not vote on policy this year and could not dissent from the decision to hold rates steady, but he still participates in the discussions.

James Bullard, the president of the Federal Reserve Bank of St. Louis and a dissenting vote in the decision to keep rates steady, said he wanted to move more quickly to get ahead of any future weakness. Mr. Bullard’s “no” vote was the first dissent during Jerome H. Powell’s tenure as Fed chair, a position he took on in February 2018.

Cutting rates now “would provide insurance against further declines in expected inflation and a slowing economy subject to elevated downside risks,” Mr. Bullard said in a statement released on Friday. “Even if a sharper-than-expected slowdown does not materialize, a rate cut would help promote a more rapid return of inflation and inflation expectations to target.”

While the rate of growth remains decent and unemployment is at its lowest level in nearly 50 years, the Fed is fighting stubbornly weak inflation. The Fed has not consistently hit its 2 percent target for inflation, which is meant to guard against economy-damaging deflation, since formally adopting the goal in 2012. The problem is now being compounded by mounting uncertainty over the slowing of economies in Europe and Asia and a continuing trade war by President Trump that spans much of the world.

“In this environment, especially in the last six to eight weeks, there has been elevated uncertainty about the outlook,” Richard Clarida, the Fed’s vice chairman, said on Friday about why policymakers might cut interest rates. His comments came during an interview on Bloomberg Television.

A growing number of officials are expecting that interest rates will come down by the end of the year, based on projections released after the meeting on Wednesday, and Mr. Powell emphasized the growing risks at his post-meeting news conference. The Fed is watching warily as Mr. Trump’s trade war drags on. The president is set to meet with President Xi Jinping of China at an upcoming Group of 20 summit, and tensions could ease or worsen at that point. Slowing global growth is another major concern, as factory indexes slump the world over.

Risk management in the current environment “would argue for softening the expected path of policy when risks shift to the downside,” Ms. Brainard added.

Part of the concern with slowing global growth is that in Europe and Japan, monetary authorities already have negative interest rates, leaving them limited room to respond to a downturn. Mr. Clarida emphasized that America’s central bank, by contrast, has sufficient space to deal with economic weakening.

“We have the tools necessary to sustain the expansion, a strong labor market and stable prices, and as appropriate, we will deploy those tools,” Mr. Clarida said during the Bloomberg interview. “We have the flexibility that we need that other countries wish they had.”

But the United States, like other countries, is fighting persistently low inflation. The Fed’s preferred price gauge came in at 1.5 percent in April, and while some of that shortfall will probably be short-lived, the slide in inflation expectations threatens the outlook for future price increases.

“In the past few months, the job market has slowed, wage growth has flattened, inflation has continued to come in below our 2 percent target, inflation expectations have fallen, and the yield curve has inverted,” Mr. Kashkari wrote in a post on the website Medium. A yield curve inversion happens when interest rates on short-term bonds rise above those on longer-term ones, an unusual occurrence that reflects market pessimism about future growth and often precedes recessions.

“I believe the committee should now take action to re-anchor expectations at 2 percent,” Mr. Kashkari wrote.