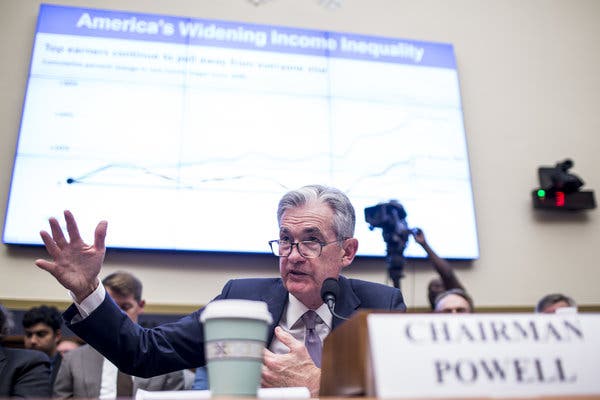 Sometimes, ideas can bounce around the intellectual fringes for years before eventually being embraced by the powerful. On Wednesday you could watch it happen in real time, on cable television.

In congressional testimony, the Federal Reserve chair, Jerome Powell, argued that despite the low unemployment rate, the job market was not yet in an all-out boom and that there was room for further improvement without worrying too much about inflation. He even hinted that American workers were due for some catch-up growth in their compensation — after years in which their pay fell as a share of the economy.

It was implicitly a rejection of what had been a consensus view among leaders of the central bank as recently as last year: that the economy had already achieved, or was quite near to, full employment, and therefore that the Fed needed to raise interest rates to prevent inflation.

Consider some of his remarks during his appearance Wednesday before the House Financial Services Committee.

“We don’t have any basis or any evidence for calling this a hot labor market,” Mr. Powell said. “We haven’t seen wages moving up as sharply as they have in the past.”

“To call something hot, you need to see some heat,” he added, as pithy a statement of economic conditions as you’ll hear from a Fed chief.

Representative Alexandria Ocasio-Cortez, Democrat of New York, later asked, “Do you think it’s possible that the Fed’s estimates of the lowest sustainable unemployment rate may have been too high?”

“Absolutely,” Mr. Powell replied, adding that the Phillips curve, the statistical relationship between low joblessness and higher inflation that has been central to Fed policymaking for decades, is showing itself as but a “faint heartbeat.”

He repeatedly noted evidence that the low jobless rate had led employers to be more willing to hire less qualified workers and spend money training them — a phenomenon with big potential longer-term benefits for both those people and the economy as a whole.

Perhaps most revealing, he seemed open to the possibility that workers should reclaim a higher share of the nation’s economic output.

Representative Denny Heck, Democrat of Washington, said, “Why hasn’t the Fed called out more than a generation of lack of wage growth?”

“Go back to the turn of the century: What you saw was a decline in the labor share, and that has not been reversed,” Mr. Powell said, using a term for the share of national income that goes to workers in the form of pay and benefits.

“We’re missing 10 years of growth,” he continued. “I think that’s really the underlying problem. We’re getting reasonable wage growth, but we missed all of those years beginning at the beginning of the century. It’s a very serious problem, and we should do a better job of calling it out.”

By contrast, not long ago, Mr. Powell and other leaders of the central bank were proceeding on the assumption that the job market did not have room to get much better without setting off an inflationary spiral.

In a 2017 speech, for example, when he was a Fed governor, Mr. Powell said that estimates of the long-term rate of unemployment indicated that “the unemployment rate gap has essentially been closed” and that “a variety of other measures also suggest that we are close to maximum employment.”

The unemployment rate was 4.7 percent that month, and it has fallen a full percentage point since, with no evident rise in inflation.

So what has changed? The simplest answer is: the data.

It may have been plausible two or three years ago to think it was only a matter of time before a tight job market translated into more rapidly rising compensation for workers, and, in turn, broader inflation. But it hasn’t happened, or at least not remotely to the degree that those models predicted.

It probably also helps that the Fed is now under pressure, from both conservatives and liberals, to increase economic growth. That gives Mr. Powell room to speak of improving conditions for workers without coming across as partisan.

Trump administration officials, particularly the National Economic Council chief, Larry Kudlow, have argued that there is no reason to think a stronger job market will stoke inflation. And the president has criticized Mr. Powell and the Fed for last year’s interest rate increases.

The shift also comes after years in which a handful of voices in the relative wilderness, both inside and outside the central bank, have been building the intellectual case for the view that Mr. Powell embraced Wednesday.

Internally, the Minneapolis Fed president, Neel Kashkari, has made arguments along these lines for years.

Outside the central bank, the activist group Fed Up has contended since its formation in 2014 that the economy was not as close to health as many Fed officials assumed, and that the Fed should forestall interest rate increases until there was more widespread prosperity.

A range of economists has also made these arguments, though often not the boldface names of the profession, but younger academics less tethered to an orthodoxy that dates back decades.

“I wouldn’t say we have won yet, but we are definitely making progress,” said J.W. Mason, an assistant professor at John Jay College at City University of New York who has written on these ideas. “Compared with a few years ago, the debate has definitely shifted in favor of those of us who have been saying that there is much more slack in the economy than conventional measures suggest, and that macroeconomic policy has been systematically too conservative — too worried about inflation and not worried enough about unemployment.”

This hasn’t been an overnight shift. You can see in comments from a range of top Fed officials over the last couple of years that they have grappled with the possibility that they have been overly confident in their assessment that the economy was closing in on full health.

But Mr. Powell’s appearance before Congress on Wednesday should leave little doubt of where the intellectual currents are flowing.