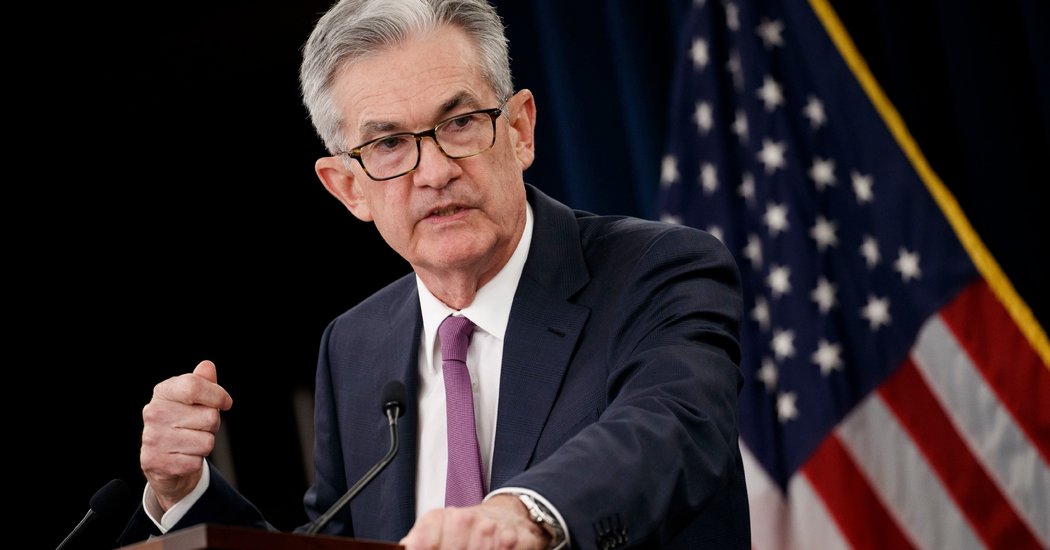 WASHINGTON — The Federal Reserve’s meeting this month was never going to be an easy one given that officials remain split over when — or whether — to cut interest rates. The last few weeks could set the Fed up for an even more difficult call.

President Trump has put the Fed under a microscope, jawboning officials for months to cut rates and calling the central bank America’s “most difficult problem” in a series of posts on Twitter on July 5.

The Fed’s chair, Jerome H. Powell, and his colleagues say they ignore politics when making decisions. But if they do reduce interest rates, as markets expect, some slice of the Fed-watching public will interpret that as a sign that they have caved under pressure even as job gains remain solid and economic growth is still strong.

If they stand pat, they’ll deliver an unwelcome surprise to markets and could incur the White House’s wrath.

Mr. Powell will get a chance to lay the groundwork for the Fed’s meeting on July 30 and 31 when he testifies before lawmakers on Wednesday and Thursday. Markets are fully pricing in a 0.25 percentage-point rate cut this month and the Fed’s pre-meeting blackout period starts July 20, so officials have just this week and next to manage expectations.

As of last reading, they seemed unsure about what to do.

The 17-member Fed policymaking committee split sharply in June over whether the central bank should cut rates this year, with eight officials projecting a cut before the end of the year and nine pointing to no change or a rate increase. Mr. Powell said many of the officials who did not project a rate cut saw the case for one strengthening.

Data since have provided little clarity — if anything, the economic snapshot may be blurrier. Job gains have rebounded after a slow May, and Mr. Trump and President Xi Jinping of China spoke at a summit in Osaka, Japan, averting an immediate escalation of the trade war between their nations.

But temporary relief is not a permanent solution, and tensions could reignite, creating uncertainty that threatens economic growth. The global economy continues to struggle, manufacturing data are flagging, and price increases in the United States remain mired below the Fed’s goal.

“They are in a bit of a bind,” said Joseph Song, United States economist at Bank of America. “It’s going to be difficult. The committee is clearly divided.”

Mr. Song said that he expected the Fed to hold off on cutting interest rates until September and that he thought Mr. Powell would need to communicate that later timing at his congressional appearance this week.

If there is a case for cutting rates sooner, it hinges on inflation data, he said. Price gains have been mired below the Fed’s 2 percent goal almost permanently since the central bank formally adopted the target back in 2012. That’s a problem because it creates a credibility issue for the Fed and increases the risks that prices could fall into economy-harming price declines in a recession. Deflation would be bad news since it could encourage consumers to hold off on purchases, knowing that they will be cheaper tomorrow, and would exacerbate a downturn.

The Fed’s preferred inflation index increased just 1.5 percent in the year through May, and June figures will be released on July 30, the first day of the Fed’s meeting.

Against that backdrop, and with trade tensions still humming in the background, the Fed may feel justified cutting rates this month even as economic growth data hold up. They set policy with an eye toward the future, since monetary policy moves take time to kick in.

“The question my colleagues and I are grappling with is whether these uncertainties will continue to weigh on the outlook and thus call for additional policy accommodation,” Mr. Powell said in a speech last month.

Moving now could signal the Fed’s commitment to hitting the inflation target and a willingness to proactively offset any fallout as trade tensions drag on.

The case for a rate cut “was never about the labor market, or the consumer, which seemed pretty good,” said Julia Coronado, founder of MacroPolicy Perspectives, who expects a rate cut with the message that the economy “is in a good place, and we’re going to keep it there.”

But even if the Fed delivers on a rate cut, the move is unlikely to insulate the central bank from political fire.

Mr. Trump has continued to criticize the Fed even as it has pivoted from raising rates steadily to pledging “patience” in the first half of this year and, more recently, to setting up for coming rate cuts. The president said over the weekend that “our Federal Reserve doesn’t have a clue!” and that “they raised rates too soon, too often, & tightened.”

The White House has reportedly looked into firing Mr. Powell, though that may prove legally impossible. Larry Kudlow, Mr. Trump’s National Economic Council director, said at a CNBC event Tuesday that there was no immediate move to get rid of Mr. Powell.

“I will say that unequivocally, at the present time, yes, he is safe,” he said.

Political strife makes this week’s appearance all the more important for Mr. Powell. While the president may take issue with the Fed’s policy setting, lawmakers in the House and Senate are the Fed’s bosses. They give the Fed its goals, have the ability to change the law that sets out its rules and responsibilities, and are able to support or reject the White House’s nominees for future central bank leaders.

Mr. Powell has cultivated relationships on Capitol Hill, meeting regularly with members of the Senate Banking and House Financial Services Committees. He got together with nine members in May, and has had 44 congressional meetings this year, seeing some lawmakers who oversee the Fed twice, based on his calendars.

“There’s really no way that the Fed can win with President Trump,” Ms. Coronado said. She said the Fed was concentrated on communicating with lawmakers and, importantly, making moves that could stand on merit. “Chair Powell is focused first on making careful, methodical decisions.”