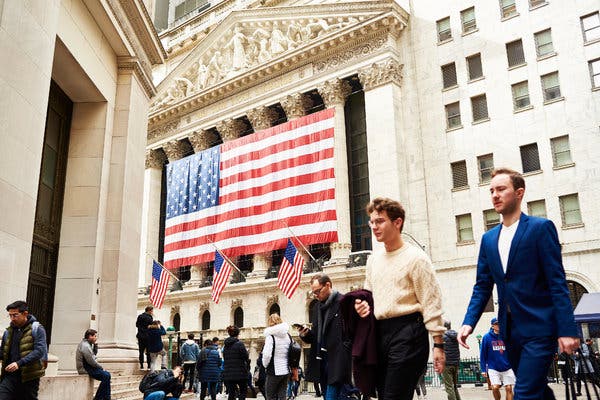 WASHINGTON — The Federal Reserve this week will most likely cut interest rates for the first time since 2008, when the economy was mired in a deep recession, as the central bank tries to keep a record economic expansion from petering out.

The expected change, while likely to be small, will end an era of gradual rate increases intended to return the economy to a more “normal” state in the wake of the Great Recession, when the Fed slashed rates to near zero as it tried to rescue the economy. The Fed’s approach has largely worked — the United States economy is growing, unemployment is at a 50-year low and wages are slowly rising.

But a rate cut at this moment in the cycle sends a signal: The current economy could be as good as it gets.

The Fed’s move on Wednesday may cheer President Trump, who has jawboned the central bank for a year over its 2018 rate increases, saying the economy would have gone up “like a rocket” had the Fed not gotten it wrong.

“The Fed acted too soon. I turned out to be right, they acted too soon and too violently,” Mr. Trump said on Friday at the White House.

But the Fed, which operates independently of the White House, is likely to make a move driven by precaution, not politics, as it tries to inoculate the economy against the harmful effects of slowing global growth and Mr. Trump’s trade war.

While the United States economy continues to chug along, cracks are beginning to show. Manufacturing gauges, which often lead the rest of the economy, are slumping across the world. Business investment and confidence have suffered under Mr. Trump’s trade spats and tariffs. A potent recession indicator is flashing red — rates on 10-year bonds have been lower than those on 3-month government securities, a sign that investors are pessimistic about the future.

[The signs professional forecasters use to predict recessions.]

The effect of Mr. Trump’s $1.5 trillion tax cut is waning and businesses report that they are holding off on expanding, in part because of concern about global economic growth and a protracted trade dispute between the United States and China. Gross domestic product, the broadest measure of goods and services produced in the economy, rose at a 2.1 percent annual rate in the second quarter, according to data released on Friday. That is a decent pace, but it shows the economy is reverting to normal after a 3.1 percent growth rate in the first quarter.

Jerome H. Powell, the Fed chair, has been signaling a possible rate cut, telling lawmakers this month that “the uncertainties around global growth and trade continue to weigh on the outlook” and that the Fed would act as needed to sustain the economic expansion.

Anticipation of a cut may already be providing a slight economic jolt by lowering consumer interest rates and sending stocks soaring, giving companies more reason to invest and consumers an extra nudge to buy a house or a car. The Fed raised rates nine times in total, and four times in 2018, before pausing this year. This move is seen by many as a recalibration to help the economy remain on track, not the start of a cycle that will return rates to rock bottom.

Yet in cutting now, the Fed is effectively ending its campaign to put economic policy back to normal. The shift confirms that interest rates will be much lower from now on, leaving the economy in a much more fragile state.

After years of increases, interest rates remain historically low and economic output, while growing, has hovered at a disappointing 2 percent for most of the past decade as population aging and slow productivity gains weigh down its potential. Inflation also remains mired below the Fed’s goal.

The Fed’s target interest rate stands between 2.25 and 2.50 percent, roughly half of its 5.25 percent level before the financial crisis, leaving the central bank with limited room to act in the event of a recession.

“It’s much more fragile,” Diane Swonk, chief economist at Grant Thornton, said of the economy, explaining that consumers and businesses should be “euphoric” this late in a cycle but are not.

That reflects “the uncertainty, and the scars — we still have scars from the crisis,” she said.

The stock market has gyrated over the past year on worries about Mr. Trump’s trade wars, a slowdown in China and the prospect of the Fed pushing through more rate increases. Consumers pulled back their spending late last year as uncertainties mounted, a sign of how susceptible they might be to any downturn.

The central bank is paying attention to that vulnerability. Following signaling by policymakers, investors anticipate that the Fed will cut rates by a quarter-point this month and once more this year. Fed officials expect to eventually resume raising rates, based on their June economic projections, which show a rebound in 2021 and a slightly higher Fed funds rate over the longer run.

But many analysts say it is unlikely that the Fed will lift again before the economy tips into a recession. That would make the current rate setting this business cycle’s peak.

“We think we’re in the beginning of the end,” said Subadra Rajappa, head of United States rates strategy at Société Générale. Her team expects a downturn, and further rate cuts, in 2020.

Even if it keeps a recession at bay, the Fed is working against a perilous backdrop.

The central bank is tasked with maintaining full employment and stable inflation, which it defines as price gains around 2 percent. That’s enough to fend off economy-harming deflation.

Policymakers have yet to hit their price goal sustainably: Their preferred inflation gauge came in at just 1.5 percent in the year through May. Officials have been banking on continued economic growth to push wages and prices up — so any slowdown could ensure they miss their goal, denting their credibility.

“On the basis of inflation alone, I could feel confident in arguing for a couple of rate cuts before the end of the year,” Charles Evans, president of the Federal Reserve Bank of Chicago, said on July 16.

Interest rates make matters worse. The Fed policy setting that neither stokes nor reins in growth has been creeping lower as growth slows, a trend that has been slowly playing out for years across advanced economies.

That’s why policymakers have not been able to lift rates more despite a very long expansion: The economy needs very low rates just to sustain historically ho-hum progress. And it leaves the Fed with far less ammunition to fight future downturns. Gone are the days of cutting 5 percentage points to goad growth back to life, as the Fed did in 2007 and 2008.

Between the continuing shortfall and the Fed’s more limited room to maneuver, officials think the risks of waiting too long to adjust policy are much greater than the costs of going early and later discovering that they could have held off.

“It’s better to take preventive measures than to wait for disaster to unfold,” John C. Williams, president of the Federal Reserve Bank of New York, said on July 18. “When you only have so much stimulus at your disposal, it pays to act quickly to lower rates at the first sign of economic distress.”

The Fed has acted early to get ahead of the curve in the past. Of the seven initial rate cuts that have happened outside of recessions in the past 30 years — moves that were or could have been seen as precautionary — 1998 is the most similar to now.

As “Armageddon” smashed the box office and 8-year-olds across the country struggled to keep Tamagotchis alive, the job market looked hot, inflation lingered below 2 percent, and, like today, the economic picture at home looked mixed as risks abroad mounted.

Back then a financial crisis in Russia, a contraction in Japan and election and reforms in Brazil threatened the United States expansion.

The Fed cut by a quarter-point in September 1998 and followed that up with an impromptu cut in mid-October and another in November. The economy righted itself.

But there are major differences between that experience and this one. The Fed moved quickly in 1998 while stock markets were sinking on the heels of very real events, including the near-failure of Long-Term Capital Management, a major hedge fund.

This time, the Fed merely signaled coming moves when both real economic data and stocks were wobbling back in May and early June, spooked by the specter of trade escalation. Economic data has since improved, and the Fed’s guidance helped to send equity indexes to record highs.

Mr. Bullard and other Fed officials have tried to signal that this cut may be isolated if the economy stays on track.

Despite their assurances that policy will be flexible and data-dependent and a recent improvement in several economic indicators, market pricing suggests investors are betting on further easing before the end of the year.