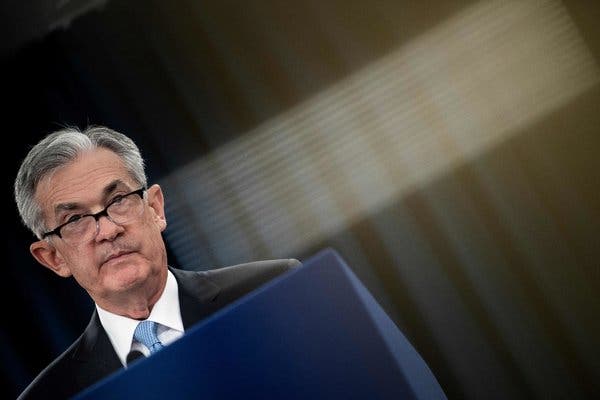 Central bankers pride themselves on being the grown-ups of economic policy.

They want it known they’re basing their decisions on sound economics rather than political considerations. They wish not to be pushed around by what traders in financial markets and cable news pundits want. Or even by the president of the United States.

But what if the grown-ups make a mistake? This week, at a two-day policy meeting ending Wednesday, Federal Reserve policymakers will, implicitly, be discussing whether they’ve raised interest rates too much, too soon.

The way things have evolved in the last few weeks, both in financial markets and in the economic data, it increasingly looks as if the Fed’s four rate increases last year pushed the cost of borrowing money beyond the level that the current U.S. economic fundamentals can sustain.

The question for the Fed is whether to correct a possible mistake by cutting interest rates, or to leave rates where they are and hope that things turn around. The optimistic view is that a sharp drop in Treasury bond yields and some soft data on factory output, job growth and wages reflect just a temporary blip.

The economy still seems to be growing steadily, and the unemployment rate is very low. This is far from a crisis. But wages are rising more slowly than they were a few months ago, and the forecasts for inflation and growth reflected in bond prices have plummeted in recent weeks. That is the case despite new tariffs on Chinese imports that should push consumer prices up over time.

New developments on Friday confirmed the pattern. The University of Michigan consumer sentiment survey showed Americans’ expectations of future inflation fell to 2.2 percent, the lowest on record, from 2.6 percent in May. And the prices of inflation-protected bonds implied that investors’ expectations of inflation over the coming decade fell to 1.65 percent, the lowest in nearly three years.

The yield curve, which charts the interest rates the government must pay to borrow money for short versus medium versus long periods, tells a story about what savvy big-money investors see as the most likely economic future.

Right now it is indicating that the economy is slowing, that the Fed will need to cut interest rates significantly in the next few months, and that it won’t need to raise them again for a few years. Moreover, it’s hinting that both interest rates and inflation will stay quite low by historical standards for decades to come.

All of that suggests that the Fed raised interest rates too much in 2018, and that the economy isn’t strong enough to sustain the interest rate target of just under 2.5 percent (where things stand now).

In effect, if you believed that the interest rate target was set correctly a couple of months ago, as Fed officials did, it is hard to believe that is still the case given the combination of falling longer-term interest rates, inflation expectations and softer growth in job creation and wages.

The consensus view of savvy Fed watchers is that the central bank won’t actually make a major reversal in policy this week, but will signal openness to doing so at future meetings. And Jerome Powell, the Fed chairman, and his colleagues may first want more information — particularly from a potential meeting between the presidents of China and the United States at the G20 summit later in the month, which could calm trade tensions.

But the nature of economic policy is that you’re always making it in a fog. And there is cost to waiting, too — a message that the Fed just isn’t too concerned by the signs of an economic slump that are evident in markets and some economic data, like recent surveys of factory activity and the most recent employment report.

You don’t have to be a psychologist to think that some Fed officials may be reluctant to cut rates because it would either look as if they were concluding that President Trump was correct in his attacks on their interest rate increase in December or bending to his demands for rate cuts.

Mr. Powell has told colleagues they need to ensure they don’t make bad policy just to try to prove their political independence — that they need to make the same decisions they would make absent presidential pressure. The coming meeting will be a test of that resolve.

There are solid arguments against cutting rates just now, involving financial stability. In particular, if the Fed reacts too quickly to the tribulations of financial markets, it could encourage excessive risk-taking in ways that could ultimately fuel a boom and bust.

On the other hand, if Fed officials refrain from cutting rates this summer and the economy falters, they are almost certainly likely to end up with even lower rates for longer in trying to repair the damage. If you believe low rates inevitably fuel financial excess, a small rate cut now may be better than big rate cuts later.

There is a truism of central banking that if you wait until there is overwhelming evidence that the economy is falling apart, you’re probably waiting until it’s too late. One man’s trigger-happy overreaction to data is another man’s prudent risk management.

The economic expansion turns 10 years old in a couple of weeks, when people flip their calendars from June to July. (That is, unless a recession has begun and we just can’t see it yet.) The Fed has done a lot of hard, frequently unpopular work to keep the economy on track.

Sometimes, being a grown-up means admitting you were wrong.