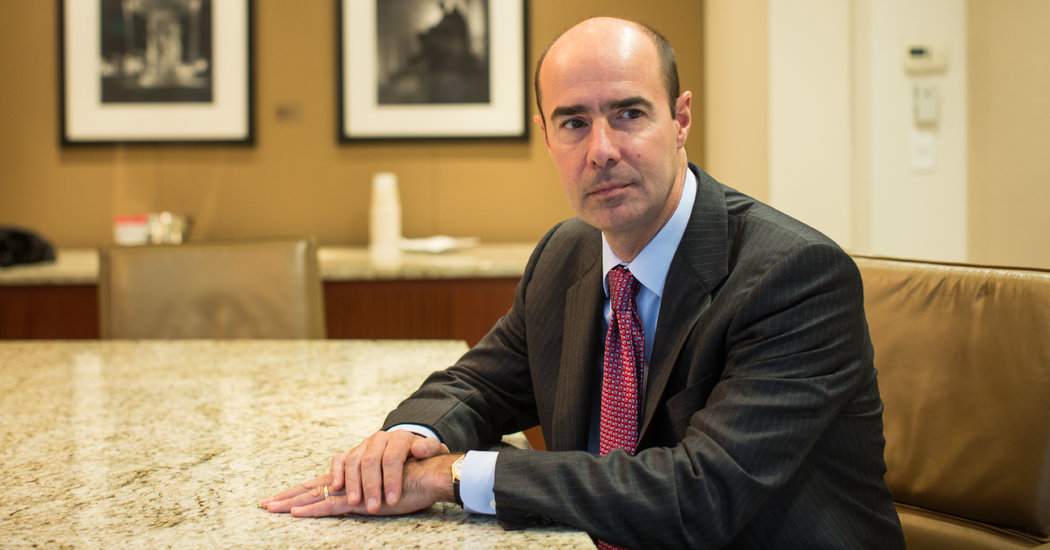 President Trump said Thursday that he would name Eugene Scalia as his next secretary of labor, tapping the longtime labor lawyer and son of the former Supreme Court justice Antonin Scalia for a position with vast responsibility over the American work force.

The appointment is likely to be contested by Democrats and labor unions because Mr. Scalia has a long record of representing Walmart and other companies that pushed back against unions and tougher labor laws. He was a former top lawyer for the Labor Department in the George W. Bush administration and is currently a partner in the Washington office of Gibson, Dunn & Crutcher, a prominent corporate law firm.

In a post on Twitter, Mr. Trump said Mr. Scalia “has led a life of great success in the legal and labor field and is highly respected.”

I am pleased to announce that it is my intention to nominate Gene Scalia as the new Secretary of Labor. Gene has led a life of great success in the legal and labor field and is highly respected not only as a lawyer, but as a lawyer with great experience….

If confirmed, Mr. Scalia will replace Alexander Acosta, who was distrusted by anti-labor conservatives during his two and a half years in the job. He said last week that he would resign amid scrutiny of his handling of a sex crimes case involving the financier and one-time Trump friend Jeffrey Epstein when Mr. Acosta was a federal prosecutor in Florida.

Mr. Acosta’s deputy, Patrick Pizzella, is to serve as acting secretary of labor when Mr. Acosta’s resignation becomes effective on Friday. Mr. Pizzella is viewed as a more natural ally of free-market conservatives than Mr. Acosta was.

Mr. Scalia, like his father, who died in 2016, is a member of the Federalist Society, a conservative legal organization that has attained enormous influence within the Trump administration. The group has suggested numerous Trump judicial appointees and played a key role in their confirmations, including those of Mr. Trump’s two Supreme Court nominees, Brett Kavanaugh and Neil Gorsuch. Many Democrats view the Federalist Society as a “corporate, right-wing” organization bent on undermining the federal bureaucracy, as Senator Sheldon Whitehouse of Rhode Island put it in May.

Two people familiar with his appointment said that several conservatives had suggested Mr. Scalia to the president in recent days.

Among them was Senator Tom Cotton, Republican of Arkansas, who waited to suggest it until Mr. Acosta had agreed to step down, according to one person familiar with the discussions. After discussing the idea with several senior Trump officials, Mr. Cotton spoke to the president and then joined a meeting Thursday afternoon during which the president offered Mr. Scalia the job.

Mr. Scalia, 55, was nominated by Mr. Bush in 2001 to serve as solicitor of the department, but was never confirmed by the Senate, which was controlled by Democrats at the time. Much of the fear about Mr. Scalia’s nomination was based on his opposition to a Clinton administration regulation that would have protected workers from repetitive stress injuries, which became known as the ergonomics rule. Mr. Scalia had weighed in frequently against the rule, deriding the rationale for it as “unreliable science.”

Mr. Bush eventually used a recess appointment to install Mr. Scalia in the position, effectively bypassing the Senate. He left the department in 2003 and returned to private practice.

A former subordinate of Mr. Scalia’s in the solicitor’s office, Ann Rosenthal, said she was appalled when he was nominated to the position after observing his opposition to the ergonomics rule. But she was pleasantly surprised to find him reasonable and relatively committed to protecting workers. Ms. Rosenthal, who has since retired, recalled telling Mr. Scalia that he had far exceeded her expectations. “I have a different client now,” he responded.

Mr. Scalia represented a variety of corporate clients at Gibson, Dunn & Crutcher. In 2006, he helped Walmart triumph in a prominent fight against a Maryland law that would have required companies with more than 10,000 workers to either spend at least 8 percent of their payroll costs on health care, or pay into a state Medicaid fund.

He argued that allowing individual states to establish health care mandates would create chaos and that the federal government should address the issue of rising health care costs.

Mr. Scalia also defended Boeing in a politically charged case. A union representing the company’s workers in Washington State argued that Boeing had violated labor law by threatening to open another assembly plant in South Carolina unless the union agreed to a no-strike clause in its contract.

The general counsel of the National Labor Relations Board under President Barack Obama brought a case against the company, which the union ultimately abandoned when it reached a deal to raise wages and expand its presence in Washington. But the case set off an intense backlash against the labor board among Republicans in Congress. The company and its Republican defenders derided the case as frivolous.

But it was through his campaign against the ergonomics rule that Mr. Scalia earned his reputation as a free-market conservative and union antagonist.

He frequently dismissed the link between repetitive motion and physical ailments suffered by workers, writing in a Cato Institute publication that disorders such as carpal tunnel syndrome are “purportedly” caused by typing and asserting that “ergonomists cannot establish in any given case whether an ailment was caused by work or by genetic factors or other activities, such as sports.”

He saw in the rule evidence of crass political calculation by labor unions, writing in a Wall Street Journal opinion article “that ergonomic regulation will force companies to give more rest periods, slow the pace of work and then hire more workers (read: dues-paying members) to maintain current levels of production.”