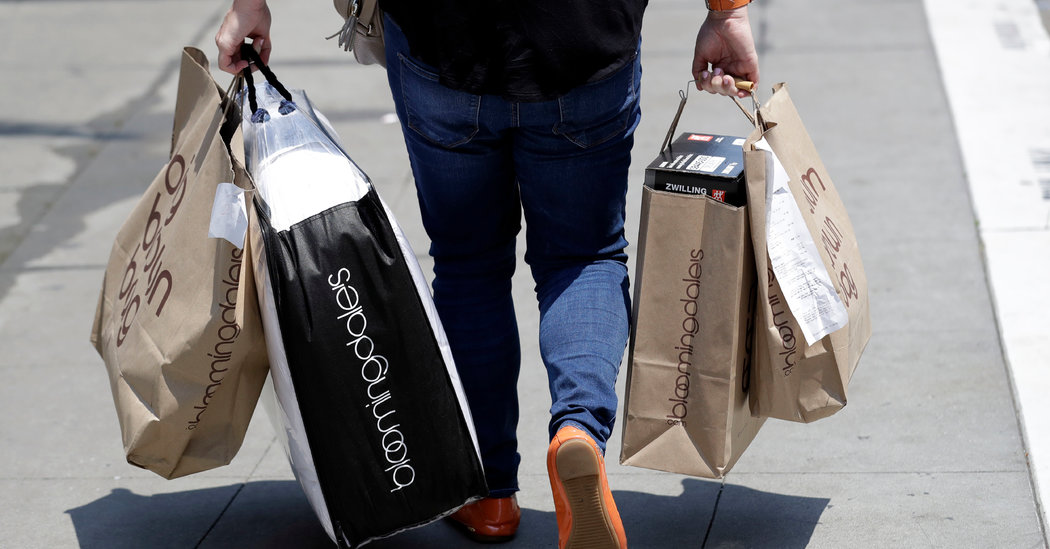 One of the hard things about projecting how the economy will evolve in the coming months is that two different sides of it are sending completely opposite signals.

American consumers keep buying stuff, driving solid growth through the first half of the year. On Friday, the Commerce Department reported that consumption spending rose a healthy 0.4 percent in May (with an 0.5 percent rise in personal income).

But American businesses are sounding a more pessimistic note, pointing to softer growth ahead, or even contraction. Trade wars and the fading impact of the 2017 corporate tax cuts seem to be holding back businesses’ investment intentions.

Perhaps most worrisome, indications about the future are looking gloomy. Numerous surveys of industrial activity have declined in their most recent readings, suggesting that manufacturing companies in particular are entering hard times.

The result is that American consumers are carrying the burden of keeping the economy out of a significant slump or recession.

For the quarter that ended Sunday, for example, the economic research firm Macroeconomic Advisers projects that personal consumption will have risen at a 3.7 percent annual rate, while business spending on structures and equipment will have fallen at annualized rates of 4.6 percent and 4.4 percent.

Those and other forces, in those estimates, suggest moderate economic growth, a net 2 percent rate.

There were tentative signs of trade peace between the United States and China this weekend that could improve the outlook for businesses. But as the expansion reaches the decade mark and becomes the longest on record — a milestone reached Monday, assuming the economy doesn’t turn out to already be in recession — the disconnect between the consumer side of the economy and the corporate side will eventually end in convergence.

The big question for the economy in 2020 is just how this will occur.

In the more optimistic view, the challenges facing the corporate sector turn out to be temporary — perhaps a cooling of trade tensions helps — and demand from domestic consumers soon returns businesses to a more expansionary mode.

In a more pessimistic one, slumping business confidence and the cost of trade wars cause employers to pull back on hiring. A softer job market causes workers to become more cautious about their spending, and an overall economic slump results.

“We’re expecting a gradual cooling in the economy,” said Lydia Boussour, senior economist at Oxford Economics. “One concern is that trade uncertainty could filter through to lower consumer and business confidence so that you start seeing a feedback loop that slows the economy more significantly.”

There is some evidence that the pessimistic outcome could be on the way. The latest readings on the labor market showed a significant slowdown in job creation in May, and the rate of growth in wages also seems to have slowed.

Surveys of consumers are showing some warning signs too. On Friday, the University of Michigan’s consumer sentiment survey showed that Americans’ expectations for the future fell substantially in June. Its index was 89.3, down from 93.5 in May. The Conference Board’s consumer confidence survey showed an even sharper decline in June from the month before.

The case for optimism comes from the most recent developments in financial markets and the Federal Reserve.

At the start of June, the Fed intended to leave rates unchanged. But over the course of the month, as the business-centric economic data softened and bond markets increasingly pointed toward a substantial slowdown in the near future, the central bank undertook a major pivot.

Now, the Fed is poised to cut interest rates, perhaps as soon as late July. As it signaled those plans, financial markets moved in ways that encourage consumers.

The stock market is up about 7 percent from its recent low on June 3, and about 17 percent for the year. Rising stock prices tend to prop up consumer spending through a “wealth effect” in which people with growing portfolios are more comfortable making big purchases.

Usually when stock prices rise, interest rates do, too. But the reverse has happened in this episode, as markets have started to price in lower rates from the Fed. So consumer borrowing costs have been plunging, which should also encourage purchases of homes, cars and other expensive items in the months ahead.

The average rate on a 30-year fixed-rate mortgage, for example, has fallen to 3.73 percent, from a recent high of 4.94 percent in November. That should strengthen the overall economy both by coaxing more people to buy homes — which often results in lots of spending on new furniture and the like — and giving people incentive to refinance existing mortgages.

“Consumers have already indicated in the current month that they felt mortgage rates were becoming more attractive and boosting home-buying conditions,” said Richard Curtin, the director of consumer surveys at the University of Michigan. “I think they are remarkably attuned to interest rate policy.”

To some extent, the challenges of the business sector in 2019 look like a repeat of a pattern from 2015. Then, a rising dollar and slowing overseas economies created deep challenges in export-oriented sectors, especially in heavy industry. But consumer spending and service industries held up well enough that the overall economy avoided recession.

There are some new wrinkles this time. Trade tensions are a driving force for lower export demand. This episode coincides with a fading impact from fiscal policy. The 2017 tax bill helped increase growth in 2018, but its effects do not seem to be lasting.

One thing the 2015 episode and the 2019 one have in common, though, is timing — the year before a presidential election.

The entire economic backdrop to the 2020 race, in other words, may depend on which is sending the truer signal about the outlook for the year ahead: the free-spending American consumer or the jittery American business.