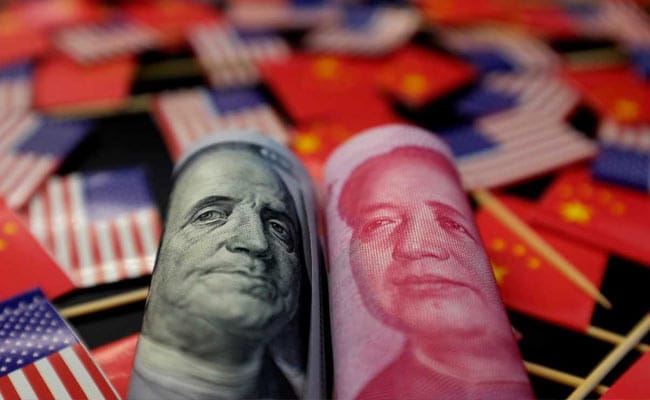 U.S. President Donald Trump dismissed fears of a protracted trade war with China on Tuesday despite a warning from Beijing that labelling it a currency manipulator would have severe consequences for the global financial order.

Trump, who announced last week he would slap a 10% tariff on a further $300 billion in Chinese imports starting on Sept. 1, tweeted that “massive amounts of money from China and other parts of the world” were pouring into the U.S. economy.

He also pledged to stand with American farmers in the face of Chinese retaliation. China has halted U.S. agricultural purchases and raised the possibility of additional tariffs on U.S. farm products.

U.S. farmers, a key political constituency for Trump, have been among the hardest hit in the trade war. Shipments of soybeans, the most valuable U.S. farm export, to top buyer China sank to a 16-year low in 2018.

While Trump played down the prospect that the trade dispute could be drawn out, St. Louis Federal Reserve Bank President James Bullard said the U.S. central bank may be stuck with a volatile global trade environment for years.

“I think of trade regime uncertainty as simply being high in the current environment,” Bullard said at a National Economists Club luncheon. “I do not expect this uncertainty to dissipate in the quarters and years ahead.”

The U.S. Treasury Department said on Monday it had determined for the first time since 1994 that Beijing was manipulating its currency.

It acted after China decided to let the yuan fall below the key seven-per-dollar level for the first time in more than a decade, rattling financial markets and dimming hopes for an end to a trade war that has dragged into a second year.

U.S. stocks strengthened on Tuesday afternoon, with the S&P ending up 1.3% a day after dropping 3%. The Nasdaq surged 1.4%.

The yuan strengthened on Tuesday as China’s central bank took steps to contain its slide.

China “has not used and will not use the exchange rate as a tool to deal with trade disputes,” the People’s Bank of China (PBOC) said.

“China advised the United States to rein in its horse before the precipice, and be aware of its errors, and turn back from the wrong path,” it said.

The Trump administration wants to continue trade talks with China and is still planning to host a Chinese delegation for talks in September, Larry Kudlow, director of the White House National Economic Council, told CNBC on Tuesday.

Kudlow said movement toward an agreement could change the outlook for U.S. tariffs, adding, “It takes two to tango.”

He added that the U.S. economy was still in good shape and said he saw no signs of a global recession on the horizon despite growing concerns the U.S.-China standoff is slowing manufacturing activity around the world.

“The economic burden is falling vastly more on them (China) than us,” Kudlow said.

Kudlow said Washington was forced to make the currency designation given a 10% drop in China’s currency since April 2018, and said other members of the Group of Seven (G7) industrialized countries supported the action.

“At some point in time, if they are violating our laws, WTO (World Trade Organization) laws and, frankly, G20 laws of currency stability … we have to take the action,” he said. “They brought it on themselves.”

Roger Altman, a former Treasury Department official and founder and CEO of Evercore investment firm, told CNBC he was sceptical that Trump would allow prolonged instability in financial markets since his reputation was staked so closely to economic growth and the success of the U.S. stock market.

However, he said, China showed no signs of reforming its approach to technology transfer, intellectual property theft and cyber attacks.

“Unless that changes, we’re headed for a form of Cold War with China,” Altman said.

He said a currency war would be even more destabilising for markets than the trade war, one reason China had acted swiftly on Tuesday to shore up the yuan’s level.

The U.S.-China dispute had already spread beyond tit-for-tat import tariffs to other areas such as technology, and analysts caution retaliation could widen in scope and severity, weighing further on business confidence and global economic growth.

Global Times, a Chinese tabloid published by the ruling Communist Party’s People’s Daily, said the United States had taken the action purely out of a political motive to “vent its anger.”

Less than three weeks ago, the International Monetary Fund (IMF) said the yuan’s value was in line with China’s economic fundamentals.

Chinese monetary authorities let the yuan fall past the closely watched 7 level on Monday so that markets could factor in concerns around the trade war and weakening economic growth, three people with knowledge of the discussions told Reuters on Monday.

The yuan has tumbled as much as 2.7% against the dollar over the past three days to 11-year lows in the wake of Trump’s announcement of the new tariffs.

Chinese state media had warned that Beijing could use its dominant position as a rare earths exporter to the United States as leverage in the trade dispute. The materials are used in everything from iPhones to military equipment.

Shares in some of China’s rare earth-related firms surged on Tuesday amid speculation the sector could be the next front in the trade war.

In June, China issued a travel advisory warning Chinese tourists about the risks of travelling to the United States, citing concerns about gun violence, robberies and thefts.

Air China said on Tuesday it was suspending its flights on the Beijing-Honolulu route starting on Aug. 27, following a review of its network.

The Trump administration already has rolled out up to $28 billion in federal aid for U.S. farmers since the trade war began last year, and the Agriculture Department to date has made $8.6 billion of direct aid payments to U.S. farmers.