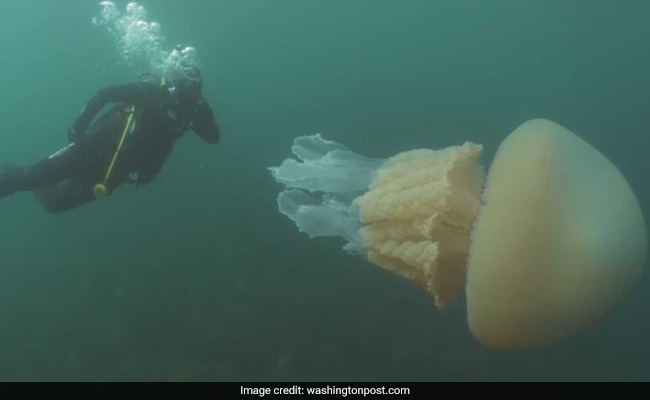 Lizzie Daly was diving off the coast of Cornwall in Britain on Saturday when she saw something large in the distance, and did a doubletake. Daly had seen a barrel jellyfish before, but nothing of this size.

Daly, a biologist and broadcaster, swam up to the peach-colored creature gliding through the water, as cameraman Dan Abbott captured the encounter.

“We weren’t expecting anything,” Daly said. “It was an absolute delight to get that experience.”

Abbott and Daly were diving as part of Wild Ocean Week, a fundraising campaign for the Marine Conservation Society of the UK created by Daly, that was meant to document various marine species off the coast.

“My first reaction was that I’ve never seen a jellyfish that size in my life,” Abbott said. Then, he was focused on staying out of its way and attempting to capture a video of the “beautiful, majestic, slow-moving, graceful animal.”

Barrel jellyfish start out small, a mere millimeter in length, before they grow into the huge creature seen in the video, said Cheryl Ames, a research collaborator with the Smithsonian National Museum of Natural History, who was not involved with the video.

“It’s really incredible to see them this big,” Ames told The Post.

It is likely impossible for a barrel jellyfish to become that large in an aquarium, according to Ames, who said the marine animal, which eats fish, tiny crustaceans and zooplankton, lives off the coast of the UK as well as in the Mediterranean. The stinging cells of barrel jellyfish are more compact than those of others with long tentacles.

“They don’t really pack a mean punch, although I wouldn’t want to put my hand in there,” Ames said.

Daly said she was not scared when she swam next to the jellyfish and hopes the video inspires others to get excited about the ocean.

“Get in the water, grab a snorkel mask,” Daly said. “Just go for it to see what’s out there.”