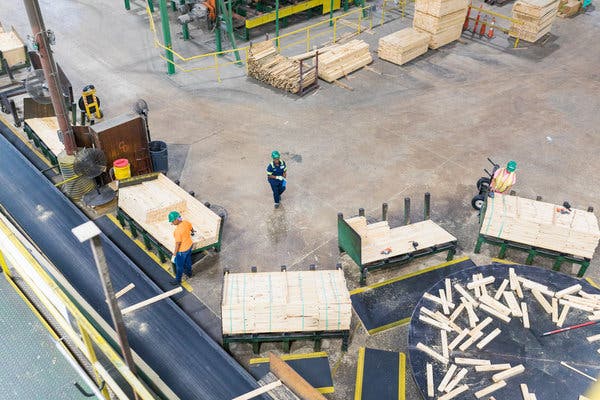 The early winners in President Trump’s trade wars are finding that victory can be bittersweet.

Unlike many American corporations, companies in industries like steel, aluminum, lumber and home appliances asked Mr. Trump to raise tariffs or backed his trade policies. These businesses, which include United States Steel, Century Aluminum and Whirlpool, had long complained of unfair foreign competition, often from Chinese companies that they argue benefit from unfair government subsidies.

Now, while tariffs are making some products more expensive for consumers, the American companies that sought them are investing in production and hiring workers. And while trade tensions appear to be slowing the global economy, these companies say they are more optimistic.

As is often the case in business, though, not everything has gone to plan. There are signs that some of the companies have expanded too fast. Partly as a result, the prices of their products are falling. And some have found that the tariffs, while helpful, can’t solve their most pressing problems.

Steel, lumber and other companies are investing

Executives who support the Trump administration’s tariffs say they now have the confidence to expand. They are less worried that a torrent of cheap imports will devastate their businesses.

One such business is Westervelt, based in Tuscaloosa, Ala., which plans to spend $190 million to build a lumber mill in Thomasville, Ala. Joe Patton, a vice president who oversees Westervelt’s wood products, said the company had decided to invest in the mill, expected to employ 125 people, because the administration imposed duties on Canadian lumber in 2017.

“The trade case gave us the hope to invest,” Mr. Patton said.

His company is not alone. Other lumber businesses are expanding across the Southern pine lands.

Investment in steel is also booming.

For years, American companies complained that Chinese producers were flooding the world with cheap steel, sending prices tumbling. The industry got some relief from the Obama administration, which imposed “anti-dumping” penalties on Chinese steel. Mr. Trump went further by imposing a sweeping 25 percent tariff on all steel imports. A few countries, including Australia, Canada and Mexico, were later exempted. On Monday, the United States imposed new steel tariffs on imports of fabricated structural steel from Mexico and China. The 2017 tax bill, which cut the corporate tax rate, also spurred investments.

United States Steel, Nucor and other companies could spend $6.6 billion to add new production or restart existing facilities by the end of 2022, said Timna Tanners, an analyst who covers steel companies at Bank of America Merrill Lynch. That outlay could increase production capacity by more than 20 percent, she said.

But it is not clear if these investments will pay off

After Mr. Trump raised tariffs on products like aluminum, steel and lumber, prices shot up, as analysts had expected. But those prices have fallen from those highs.

Reasons for the declines vary across the industries, but if the weakness continues, the companies may struggle to make money from their new investments.

Mr. Patton said he still expected Westervelt’s lumber business to prosper over the next five to 10 years. But the decline in lumber prices will eat into profit margins.

“I don’t think anybody’s getting the return they expect right now,” he said.

In the steel industry, Ms. Tanners is predicting that new and revived plants could create a glut that she calls “steelmageddon.”

The steel companies disagree, arguing that the market can absorb the new capacity. Executives say they have carefully considered their investments and expect them to do well through the economy’s ups and downs.

“We are not adding capacity just to add tons,” John Ferriola, chief executive of Nucor, said in an email. “Most of these investments are based on producing more high-margin, value-added products, not commodity-grade steel.”

Some analysts agree with that assessment. “The steel industry is very disciplined about adding capacity and taking inefficient capacity offline,” says Lisa Reisman, executive editor of MetalMiner, an industry publication.

There are some problems tariffs can’t fix

Century Aluminum, one of the few aluminum makers left in the United States, applauded Mr. Trump’s 10 percent tariff on aluminum when it was introduced last year. The company said the tariffs had made it possible to invest over $150 million to more than double output at its smelting plant in Hawesville, Ky.

Yet Century posted a $66 million loss last year, compared with a $49 million profit in 2017. A big reason for the loss was a sharp spike in the price of alumina, the substance that is smelted to produce aluminum. A major cause of the increase: Authorities in Brazil ordered a huge alumina producer to operate at half capacity after a spill.

As Century paid a lot more for alumina, its profit margins were crushed even as aluminum prices surged. Alumina prices are declining now, but so are aluminum prices. John Tumazos, chief executive of Very Independent Research, which specializes in metals, said the company’s weak profits probably explained why Century’s stock was down more than 60 percent since the aluminum tariffs were announced.

Century could be doing even worse if it hadn’t gotten a fillip from the tariffs. The chief executive, Michael A. Bless, said investors would eventually realize that the company was taking the right steps.

“We have to make the right long-term decisions for the company,” he said, “Those, at the appropriate time, will be reflected in the stock price.”

Foreign businesses are not sitting still

In addition to protecting companies hurt by foreign competition, Mr. Trump has said his trade policies are meant to encourage businesses to move production to the United States. Some of that is happening.

After the Trump administration imposed tariffs on some types of solar panels and washing machines last year, foreign businesses in these sectors said they would make more of their products domestically to avoid the tariffs.

In the solar market, which is growing fast, several companies from overseas are building factories. Hanwha of South Korea has done so in Whitfield County, Ga. JinkoSolar, a Chinese manufacturer, has set up a plant in Jacksonville, Fla.

“That has been the biggest effect of the 201 cases,” said Edurne Zoco, a research director at IHS Markit, referring to a provision of American law that allows the president to impose import restrictions.

First Solar, an American solar panel maker that voiced support for the solar tariffs but was not directly affected by them, said it was spending $400 million on a factory in Lake Township, Ohio. Mark Widmar, the company’s chief executive, said in an email that the tariffs had “created a level playing field, rejuvenating domestic manufacturing while boosting investments and jobs.”

The two solar companies that petitioned for the tariffs did not fare as well. One, Suniva, filed for bankruptcy in 2017 before the tariffs took effect. Lion Point Capital, a New York investment firm, acquired control of the company, which emerged from bankruptcy in April. The assets of the second company, SolarWorld Americas, were acquired by SunPower, which is based in San Jose, Calif.

Two South Korean companies, LG and Samsung, set up washing-machine factories in the United States after the Trump administration imposed tariffs on those appliances in response to a complaint by Whirlpool.

Given that Whirlpool merged with Maytag in 2006 to create a washing-machine giant, some experts were skeptical of its claim that it was at a big competitive disadvantage. Whirlpool has not publicly disclosed enough data for analysts to figure out how its washer business was doing before and after the tariffs.

In testimony last month before the United States International Trade Commission, a federal agency, a Whirlpool executive said the company was earning modest profits on washers for the first time since 2012. But Whirlpool did not publicly disclose specific figures then or provide them in response to a query for this article.

“Success and failure will be more a function of your ability to read the consumer and manage your costs,” he said. “I am pretty optimistic about where this is going.”

A China-U.S. Trade Truce Could Enshrine a Global Economic Shift