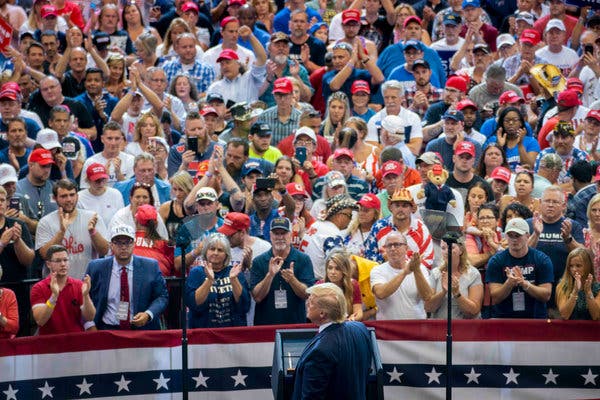 WASHINGTON — Global trade tensions escalated this week as the United States renewed its tariff war with China, sending major stock indexes tumbling as fears of an economic slowdown rattled investors around the world.

The S&P 500 index had its worst week of trading this year, as shares on exchanges from Tokyo to London fell on Friday — one day after President Trump announced new tariffs on another $300 billion worth of Chinese imports following stalled negotiations. Beijing’s response was swift.

“China’s position is very clear that if U.S. wishes to talk, then we will talk,” Zhang Jun, China’s new ambassador to the United Nations, said Friday. “If they want to fight, then we will fight.”

As the two sides appeared to drift further from a deal, Japan and South Korea veered toward their own trade confrontation on Friday, injecting greater uncertainty into the region.

The disputes could exacerbate fears of a global economic slowdown and threaten to crimp the United States’ economic expansion, its longest on record. The European Central Bank is preparing to try to bolster the eurozone economy to help weather the slowdown in growth, while China has experienced its slowest economic growth in 27 years. On Wednesday, the Federal Reserve cut interest rates for the first time in over a decade to get ahead of possible downturns.

New hiring data released Friday showed the United States economy continued to chug along, with employers adding 164,000 jobs in July. But there were signs of cooling in the job market, complicating matters as the trade war begins to reshape the economy in ways that could run counter to Mr. Trump’s goals of strengthening it.

The Commerce Department announced Friday that the trade deficit with China fell in the first six months of the year compared with a year earlier, and the country fell from being the United States’ largest trading partner to being its third, after Mexico and Canada. However, the overall trade deficit increased. American exports of goods and services to the rest of the world were flat from the year before, while imports from the rest of the world grew.

In a campaign rally in Cincinnati on Thursday, the president was unbowed with his strategy.

“Until such time as there is a deal, we will be taxing the hell out of China,” Mr. Trump told a cheering crowd.

Chinese officials and the state-run media have grown increasingly strident in response to Mr. Trump’s tactics.

“We definitely will take whatever necessary countermeasures to protect our fundamental right, and we also urge the United States to come back to the right track in finding the right solution through the right way” said Mr. Zhang, China’s U.N. ambassador.

After a series of missteps and misunderstandings, the United States and China appear to be nowhere close to a trade agreement at a time when trade barriers remain in place with other American partners. Mr. Trump’s rewrite of the North American Free Trade Agreement is still stalled in Congress, awaiting the support of Democrats. His threat of auto tariffs has not yet persuaded Japan or Europe to sign a trade deals with the United States, as he intended. And the European Union, India, China, Turkey and others have responded to Mr. Trump’s aggressive trade tactics by putting their own retaliatory tariffs on American products.

If the president’s newly threatened tariffs go into effect, the United States will have imposed levies on all of the goods it imports from China, which totaled $539.7 billion last year.

Mr. Trump said that the new tariffs would go into effect on Sept. 1, leaving a window for the United States and China to try to work out their differences. But that appears to be a difficult task. Negotiators from the two countries continue to disagree over how the agreement would be enshrined in China’s laws, how many of Mr. Trump’s tariffs on China would be removed, and how many American goods China would purchase.

[You might feel the pinch of this round of tariffs. Here’s how.]

The president and his advisers insist the strategy is necessary to take on China’s long record of unfair trade practices, but the tariffs are taking a toll.

The tech-heavy Nasdaq composite index fell 1.3 percent on Friday, and the Dow Jones industrial average dipped 0.4 percent. The yield on the 10-year Treasury note fell to 1.85 percent, its lowest level since 2016, in a sign of economic pessimism.

Myron Brilliant, executive vice president and head of international affairs at the U.S. Chamber of Commerce, said that the president’s additional tariffs “will only inflict greater pain on American businesses, farmers, workers and consumers, and undermine an otherwise strong U.S. economy.”

“We are deeply disappointed that the two sides missed the opportunity in May to address the substantive disagreements between them and have not yet reached a comprehensive, enforceable agreement,” Mr. Brilliant said.

China has vowed to retaliate against American actions, but it remains unclear how exactly it would respond. Because many more goods flow from China to the United States than the other direction, China has not been willing or able to match Mr. Trump’s tariffs dollar for dollar.

But company executives say the Chinese government has used other painful methods to retaliate against them — surprise inspections, rejections for licenses and China’s move to construct a list of “unreliable entities” that Beijing has threatened to take action against. Beijing could also encourage a boycott of American goods or direct its state-owned companies to stop purchasing, for example, American soybeans or Boeing airplanes.

The United States-China trade dispute is not the only conflict that threatens global growth.

On Friday, Japan increased its controls over a broad swath of exports to South Korea, deepening a political standoff that has plunged relations to their lowest point in decades.

Japan said it would remove South Korea from a “white list” of countries that receive preferential treatment in importing Japanese products, a move that could slow supply chains in the technology industry.

With the specter of the China conflict as a backdrop, Mr. Trump on Friday promoted his trade record in an event in the White House’s Roosevelt Room, where he announced that his administration had secured access for American cattle ranchers to the European market.

During the event, Mr. Trump paused to compliment the hats of the assembled cattle ranchers before lauding the new agreement as a “tremendous victory” for American farmers and European consumers.

“My administration is standing up for our farmers and ranchers like never before,” the president said. “We’re protecting our farmers. We’re doing it in many ways, including with China. You may have read a little bit about China lately.”

The announcement is welcome news for American beef producers who have found themselves pushed out of markets as Japan, Australia, Canada, the European Union and other countries have written new trade deals among themselves in recent years. But the limited agreement is unlikely to do much to distract from the uncertainty and volatility that Mr. Trump has stoked by pushing American trading relationships to their limits.

Mr. Trump suggested Friday that he would continue to pursue the type of trade policy that resulted in the agreement with the E.U. — one, he argued, that came about because of his tough trade posture, not in spite of it.

“Look, the E.U. has tremendous barriers to us, but we just broke the first barrier,” Mr. Trump said. “And maybe we broke it because of the fact that if I don’t get what we want, I’ll put auto tariffs. Because it’s all about the automobile, and it’s all about the tariffs.”

“If I don’t get what I want, I’ll have no choice but maybe to do that,” he added.