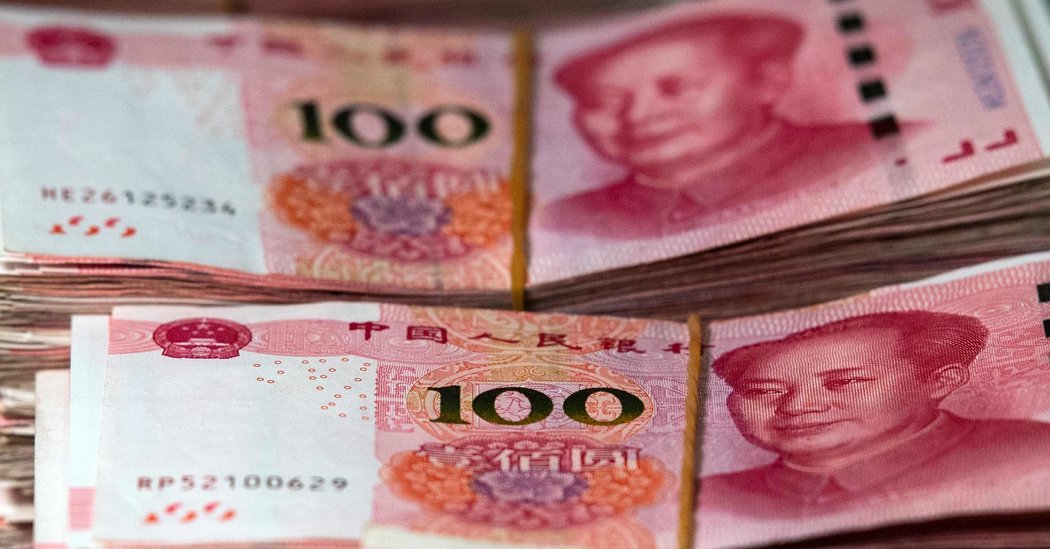 The Trump administration labeled China a currency manipulator on Monday, after China allowed the value of its currency to fall.

The designation — which the United States last used against China in 1994 — is more a symbolic move than a substantive one. But it dials up the pressure in a trade war that has rapidly escalated, harming businesses, consumers and others that depend on steady relations between the world’s two largest economies.

“The trade war has now become a currency war,” said C. Fred Bergsten, the director emeritus of the Peterson Institute for International Economics. “And the Chinese are undoubtedly going to take further action.”

Here’s a look at what the label means, and how it could affect the United States-China relationship.

What is currency manipulation, and why does it matter?

The relative value of currencies can make a lot of difference when countries buy and sell their goods abroad.

Some countries try to game the system, weakening their currencies to lift exports. They’ve included China, which held down the value of its currency in the past to speed its economic development.

That and other policies helped China build a manufacturing sector that employs tens of millions of people and serves as a factory to the world. But economists estimate that China’s economic transformation has led to the disappearance of at least a million American manufacturing jobs — and perhaps paved Donald J. Trump’s path to the presidency.

Currency manipulation will also matter in the trade war, as President Trump ratchets up tariffs on Chinese goods. A cheaper Chinese currency helps Beijing offset much of the pain of American tariffs, which otherwise would make Chinese goods considerably more expensive in the United States.

Is China manipulating its currency now?

Most economists agree that China manipulated its currency, with negative effects for the United States, for long periods from roughly 2003 to 2013. But some are arguing against the Trump administration’s move to label China a currency manipulator now.

In an announcement on Monday, the Treasury Department said China had “a long history of facilitating an undervalued currency” and had taken “concrete steps to devalue its currency” in recent days to gain an unfair competitive advantage.

China did allow the value of its currency to fall on Sunday, when the exchange rate fell below 7 renminbi to the dollar for the first time since 2008. The Chinese central bank likely would not have made such a move without a go-ahead from top officials.

But the move appears to be in line with market forces. (More on that below.) And it doesn’t appear to satisfy the administration’s own guidelines.

Twice a year, the Treasury Department puts out a report that analyzes whether countries are manipulating their currencies. In the most recent report in May, the department criticized China’s practices but said China met only one of several criteria for determining whether a country was a manipulator.

The Treasury Department said China’s trade surplus with the United States had far exceeded its threshold. But China did not meet other requirements, including sustained intervention in its currency market.

Technically, a country does not need to satisfy all those criteria before the United States can label it a currency manipulator. But to some trade experts, the report undercuts the Trump administration’s claim.

Eswar Prasad, a former head of the International Monetary Fund’s China Division, said the administration was applying the label in an “arbitrary and clearly retaliatory manner.” In a report released in July, the I.M.F. also found that China’s currency was broadly where it should be.

“The currency manipulation charge against China is difficult to support on the basis of objective criteria,” Mr. Prasad said.

How much control does China have over its currency?

The United States and many other developed countries let the market determine the value of their currencies, and typically influence that value only indirectly. For example, when the Federal Reserve raises or lowers interest rates, it can strengthen or weaken the dollar.

China manages its currency more actively, though the market still plays a role. Officials set a daily benchmark exchange rate for the renminbi, but allow traders to push the value up or down within a set range. Officials then use that trading activity to help determine the next day’s exchange rate, though they disclose few details about how that process works.

Recently, those market forces have been pushing the value of the renminbi down, as a weaker Chinese economy and Mr. Trump’s tariffs encourage investors to sell the currency.

Brad Setser, a senior fellow for international economics at the Council on Foreign Relations, said China had been resisting market pressures on its currency for much of this year. China has been reluctant to have the value of the renminbi fall too far or too fast, for fear of sparking a mass sell-off.

So the Chinese government has turned to its vast foreign exchange reserves, accumulated through years of China’s exporting more products than it imported. Beijing has used those dollars to purchase renminbi and prop up its value, Mr. Setser said.

Until recently, that is. On Monday, Chinese officials let the renminbi fall to the lowest level in over a decade. On Tuesday, they set the exchange rate at a level that was weaker than Monday but nonetheless stronger than most analysts had expected.

So what happens to China if the label sticks?

Mainly, China must negotiate how to make its currency more fairly valued with the United States and the International Monetary Fund, which governs the few international guidelines that have been established on currency. Since the I.M.F. just determined that China’s currency was fairly valued, those negotiations don’t seem likely to go far.

But the designation is likely to rankle Chinese officials, who have been very resistant to being labeled a currency manipulator, said Tony Fratto, a partner at Hamilton Place Strategies and a former Treasury Department official.

And if China’s recent depreciation is the start of a trend, it could have much bigger implications for the world economy.

A cheaper renminbi would harm American exporters and erode the effectiveness of Mr. Trump’s tariffs. It would also hurt exporters in Europe, Japan and elsewhere. And it could create market pressures for South Korea, Taiwan and others that compete in similar industries to devalue their currencies, potentially disrupting trade and investment flows.

Mr. Trump could also use the label to justify further actions on China, including perhaps higher tariffs.

Stephanie Segal, a senior fellow at the Center for Strategic and International Studies, said the actions on currency “have ushered in a new stage in the U.S.-China trade war that risks spinning out of control.”

“China’s willingness to allow the currency to depreciate was likely intended to remind the president of the downsides of escalating actions,” she said. “If that was the idea, it didn’t have the desired effect.”