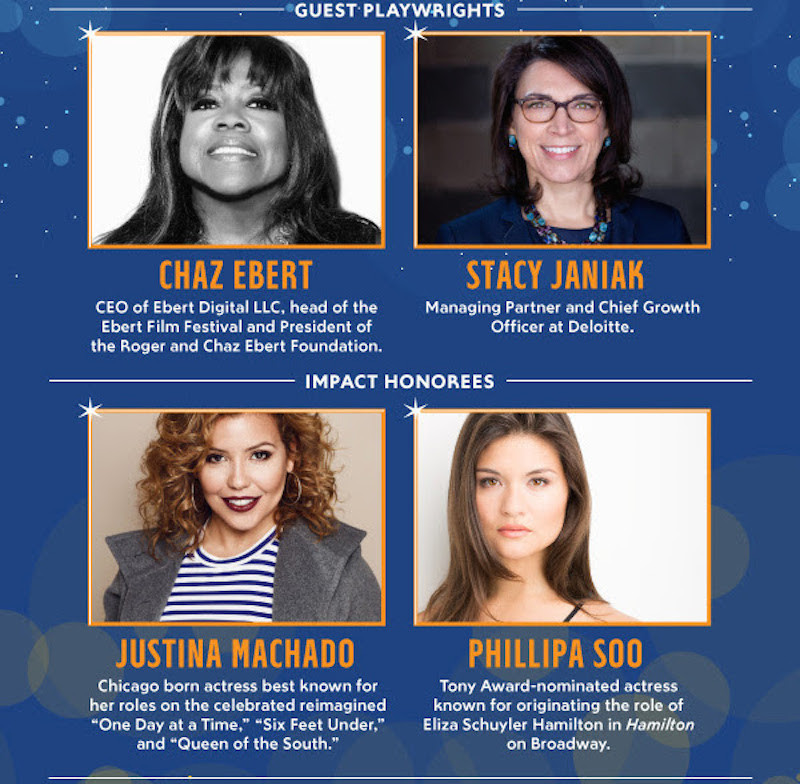 Both of the 2019 honorees are accomplished actresses: Justina Machado, a Chicago born actress best known for her roles on the celebrated reimagined “One Day at a Time,” “Six Feet Under,” and “Queen of the South”; and Phillipa Soo, the Tony Award-nominated actress known for originating the role of Eliza Schuyler Hamilton in Broadway’s “Hamilton.”

The guest playwrights whose one-act plays will have their world premiere during the Gala are Stacy Janiak, Managing Partner and Chief Growth Officer at Deloitte, and our site’s publisher, Chaz Ebert, CEO of Ebert Digital LLC, head of the Ebert Film Festival and President of the Roger and Chaz Ebert Foundation.

“Victory Gardens Theater is such a treasure in Chicago because of its rich diversity of characters, actors and playwrights, as well as its partnership with Chicago Public Schools to illuminate for students the power of the arts,” said Chaz Ebert. “I am honored to be following in the footsteps of the esteemed playwrights who have previously contributed to this gala, including my husband Roger. He made his debut at Victory Gardens Theater in 1993 with a play entitled, ‘Sex, Lies and Theatricals,’ about the selling of films at the Cannes Film Festival. That same year, Roger’s fellow guest playwright was NBA coach Phil Jackson, who led the Chicago Bulls to win six championships. Roger’s play was also restaged in 2013.”

“We are incredibly honored to have Chaz serving as a Guest Playwright at this year’s Chicago Stories Gala,” said Erica Daniels, Executive Director at Victory Gardens Theater. “She embodies the core values that we celebrate here at Victory Gardens Theater. Her commitment to empowering women, giving voice to women and children through education and the arts, and her passion for spreading empathy, kindness, compassion, and forgiveness are to be lauded. It is our privilege to recognize Chaz alongside Stacy Janiak, Justina Machado, and Phillipa Soo, three other trailblazing women producing powerful work onstage and off.”

The 2019 Chicago Stories Gala will take place on October 5th at the Four Seasons Hotel, 120 E. Delaware Place, beginning with a 6pm VIP experience, followed by cocktails at 6:30pm and the show joined with dinner at 7:30pm. To order tickets or make a donation, visit the official Victory Gardens site.

Previous Article: NALIP Honors AAFCA with its 2019 We Are Inclusion Award