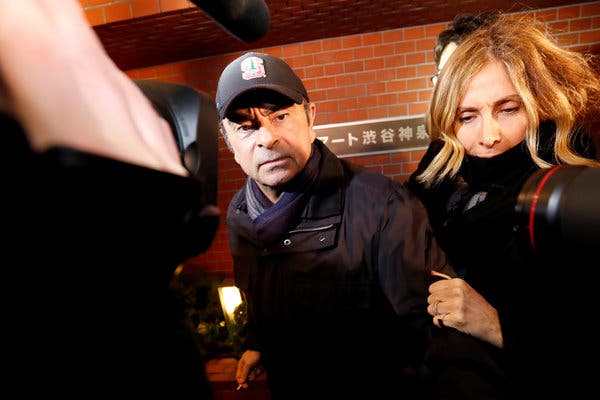 TOKYO — There is a long list of things that Carlos Ghosn, the embattled former chief of the Nissan-Renault-Mitsubishi auto alliance, is not allowed to do as he awaits trial in Japan. He cannot leave Tokyo. He cannot use the internet outside his lawyer’s office. He cannot meet friends without informing the court.

And he cannot have any contact, whatsoever, with his wife.

On Tuesday, Japanese prosecutors again persuaded a Tokyo court to forbid all communication between Mr. Ghosn and his wife, Carole, while he is out on bail. The two have not exchanged so much as a word for more than 120 days.

Among the prosecutors’ arguments: The couple could conspire to destroy evidence related to allegations that Mr. Ghosn enriched himself with Nissan’s money, some of which may have found its way to a company that prosecutors say is connected to Mrs. Ghosn.

But their concerns about Mrs. Ghosn go beyond her ties to her husband. In a translated court filing reviewed by The New York Times, prosecutors argued that Mrs. Ghosn should not be allowed to meet with her husband because she had disparaged the Japanese legal system. She had complained “baselessly” to the press, they added, using interviews and op-ed articles to criticize the institutions that allowed Mr. Ghosn to be questioned without a lawyer and kept in jail for months.

Mr. Ghosn’s case has cast a harsh and often unflattering light on Japan’s criminal justice system. Media organizations have written much about his travails. Since Mr. Ghosn’s release from jail in April, Mrs. Ghosn has helped to spur that coverage, denouncing what she calls unfair treatment of her husband.

That treatment includes forbidding the couple to have any contact. Mrs. Ghosn and the couple’s lawyers say the stipulation, which is a term of Mr. Ghosn’s bail, is a violation of his basic human rights, and they have filed a formal appeal to the United Nations over the matter.

Her portrayal of the country’s legal authorities constitutes a form of witness tampering, they wrote, arguing that it “may tacitly influence the concerned parties to support the defendant’s side.”

The comments were submitted to a Tokyo court in response to Mr. Ghosn’s fourth request to be allowed to contact his wife. On Tuesday, the court denied a fifth request by Mr. Ghosn’s lawyers to allow the couple to meet.

“This cruel separation with no end in sight is further evidence of his persecution under Japan’s hostage justice system,” Mrs. Ghosn said in a statement. “It is a vicious retaliation designed to break him.” She said she had not had any contact with her husband, including phone calls or emails.

Mrs. Ghosn’s last contact with her husband was in early April, when Japanese prosecutors burst into their Tokyo apartment at dawn. Mr. Ghosn was taken to jail, and the authorities seized Mrs. Ghosn’s phones and one of her passports. No charges have been filed against Mrs. Ghosn, and she maintains her husband is innocent. Mr. Ghosn has denied all charges.

Mr. Ghosn was first arrested in November on suspicion of underreporting his compensation. During his stay of more than 100 days in jail, he was charged with three counts of financial wrongdoing. He was released on bail after paying a $9 million bond with strict conditions, including that he remain in Tokyo and be monitored.

The April raid came shortly after Mr. Ghosn had announced on Twitter that he would hold his first news conference about the case. The timing raised suspicion that prosecutors intended to silence him.

Prosecutors soon charged him with an additional crime. During his time as Nissan’s chairman, they alleged, he had used a subsidiary to send payments to a business partner in Oman, who then sent money to a third company that Mr. Ghosn controlled.

Mr. Ghosn’s treatment has provoked debate about the fairness of Japan’s justice system, where defendants can be held for long periods without charges and are routinely questioned without legal counsel. Nearly 100 percent of criminal cases end in conviction, and most defendants ultimately confess.

Mr. Ghosn and his family have said the repeated arrests were a tactic used by Japanese prosecutors to coerce a confession from him.

The prosecutors’ insistence that he not be allowed to meet with his wife is a continuation of those tactics and an attempt to chasten Mrs. Ghosn, according to one of Mr. Ghosn’s lawyers, François Zimeray, a former French human rights ambassador at large.

“They cannot have the slightest contact,” he said. “The intent is to silence her. To punish her.”

Even in Japan, the situation is unusual, according to Yasuyuki Takai, a lawyer and former Japanese prosecutor. A court could theoretically prevent a married couple from having contact, but the situation rarely occurs, he said.

Another former prosecutor, Nobuo Gohara, said that Japanese law did not necessarily guarantee the right of defendants to meet with their family. But he wondered whether in this case the prosecutors’ insistence on denying contact might be punitive.

“It’s like a form of revenge” for the approval of Mr. Ghosn’s bail, he said, a decision that prosecutors had repeatedly fought.

Since Mr. Ghosn’s release, prosecutors have argued that Mrs. Ghosn is a “concerned party” and a potential witness to Mr. Ghosn’s alleged crimes. If allowed to communicate, they said, the couple could coordinate their stories and destroy evidence. In their June filing to the Tokyo court, prosecutors wrote that Mrs. Ghosn had already “participated in destruction of evidence.”

It is not clear what the prosecutors meant by the statement.

Mr. Zimeray said the assertion had no basis in fact. “In all other countries, one should expect prosecutors to ground such a serious accusation: What evidence? When? How?” he said. “We haven’t received any detail, and this is pure fantasy.”