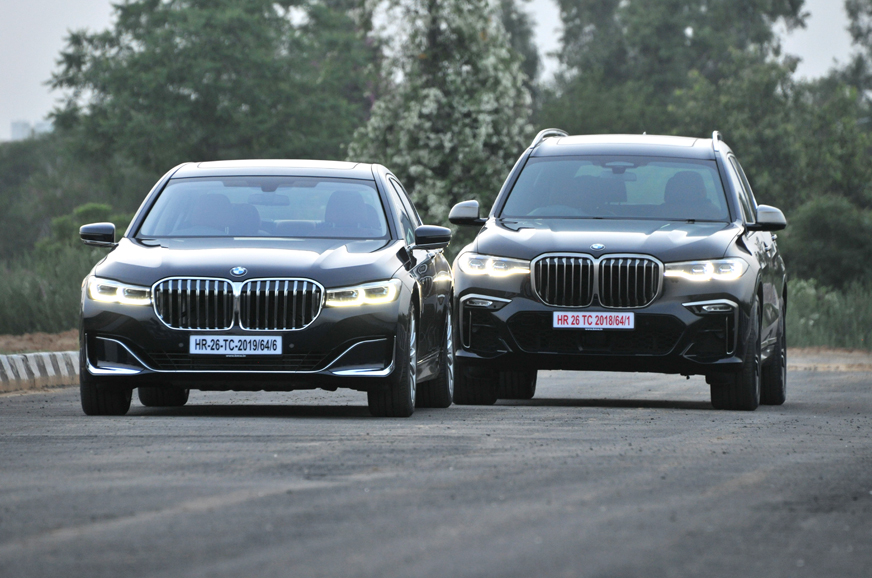 They’re both imposing on the outside and luxurious on the inside. We list out 7 things you must know about BMW’s new flagship models – the X7 and 7 Series facelift.

BMW has had a busy 2019 in India, and the latest launches are big deals, in more ways than one. The X7 is BMW’s largest SUV yet, and XL-sized range-topping 7 Series sedan has also got a makeover. So what should you know about BMW’s SUV and sedan flagships? Our 7 quick points tell you the most important information you need to know.

The X7 is all-new, the 7 Series is a facelift

It’s not like the new-generation BMW X5 is ‘small’ by any stretch of the imagination, but what BMW needed was an even bigger SUV to take on the Mercedes-Benz GLS. And so, it has brought out the BMW X7 – an all-new SUV (the biggest BMW SUV ever made) with three rows of seats and a luxurious interior befitting a model of this size and at this price.

On the other hand, the 7 Series is a facelift. It’s a mid-life revamp for the G11 7 Series, which has been on sale internationally since 2015. But this is no minor facelift. It gets a raised and re-contoured bonnet, new headlights, reshaped front bumpers, slimmer 3D-effect tail-lights, and, of course, that kidney grille…

The kidney grilles are the largest ever

There’s no missing it, is there? The kidney grille has for long been a defining design feature for BMWs of all shapes and sizes, but now – much like the vehicles it adorns – the kidney grille, too, has grown substantially. The grilles on the X7 and 7 Series are the largest on any BMWs yet. You see, the imposing and blingy look works in China and America, both of which are key markets for luxury carmakers, and that is why the X7 and 7 Series get nostrils this big. However, having spent some time around both vehicles, we can tell you’ll get used to their in-your-face kidney grilles.

Being the largest offerings in BMW’s SUV and sedan ranges respectively, the X7 and 7 Series facelift are big on the space and luxury factor. Being that big, the X7 has acres of room on the inside, and all three rows have plenty of space, and comfort levels are good, too. The X7 can be had as a 7-seater (with a bench seat for the middle row) or as a 6-seater, with individual captain seats replacing the bench seat. And then there are touches such as the dual-pane panoramic sunroof, a moonroof for the third row passengers and the crystal-effect gear lever which buyers will take a liking to.

The long-wheelbase 7 Series is a luxury limo, and in addition to oodles of space, it comes with standard heated, ventilated, massaging and multi-way adjustable rear seats. The ‘Executive Lounge Seating’ option lets the rear-seat passenger kick back and relax, with the front passenger seat sliding forward, a footrest extending out as the left side rear seat reclines, letting you really stretch out.

Both come loaded with equipment

There’s no shortage of toys to play with inside the BMW X7 and 7 Series facelift. Part of the 7 Series’ equipment list are a tablet controller in the rear centre armrest to control in-car functions, BMW’s latest iDrive system with gesture control, Laser Light headlights, adaptive air suspension, a four-zone auto climate control, a fragrance system and a 460-watt Harman Kardon surround sound system. The X7 is well kitted-out too. It gets  a 12.3-inch touchscreen infotainment system with Apple CarPlay and gesture control, a digital instrument cluster, five-zone climate control, park assist (autonomous parking) and a powered recline function for all three rows. Both models also come with a rear-seat entertainment package that adds two 10.2-inch screens mounted on the front seatbacks.

Both get 6-cylinder petrol and diesel engines

With the X7 and 7 Series facelift, there’s plenty in the way of choice when it comes to engine options. Both are available in 40Li form (a 3.0-litre straight-six, turbo-petrol engine that puts out 340hp and 450Nm of torque) and 30d form (a 3.0-litre straight-six turbo-diesel unit that produces 265hp and 620Nm of torque). For those wanting even more performance, there’s the M760Li with a 6.6-litre twin-turbo V12 making 609hp and 850Nm of torque, and a 0-100kph time of just 3.8sec. BMW will also launch the X7 M50d later in the year, which is powered by a 3.0-litre, quad-turbo (you read that right, quad-turbo!), inline-six putting out 400hp and 760Nm. An 8-speed automatic gearbox is standard on both vehicles, and the X7 features BMW’s xDrive all-wheel-drive system.

Among the most expensive BMWs on sale

Unsurprisingly, with all the luxury and performance on offer, the BMW X7, and 7 Series facelift aren’t exactly what you’d call affordable. The X7 sits at the top of BMW’s SUV range and is priced at Rs 98.90 lakh for the 40i and 30d variants, with the M50d set to cost nearly twice as much. The 7 Series facelift range, meanwhile, starts at Rs 1.22 crore and goes all the way up to Rs 2.42 crore for the M760Li, making it the most expensive BMW you can buy in India.

They are part of BMW’s product assault for India

After the introduction of the all-new Z4, X4 and X5 earlier this year, BMW has launched the X7 and 7 Series facelift – but it doesn’t end there. On August 21, BMW will launch the new 3 Series, which is expected to be followed by the facelifted X1, M8 coupé and convertible, the all-new X6, and the X3M and X4M.