The offer seemed too good to be true: a three-day cruise to the Bahamas for $129. At a minimum, that’s room, meals and transit abroad for about the price of an average hotel room.

Budget cruises abound in the ever-growing industry, where some 18 new ships are expected to launch this year, according to the Cruise Lines International Association. Based at the Port of Palm Beach, Bahamas Paradise Cruise Line operates a pair of ships that go back and forth to Freeport on Grand Bahama Island, about 90 miles away, year round.

I booked a $129 sailing on the 1,680-guest Grand Classica, formerly the Costa neoClassica, launched by the Italian line Costa Cruises in 1991, repurposed in 2018 (double-occupancy rates currently run from $99 a person for an interior cabin to $459 a person for a suite). With tax and fees, the bill was about $210, still a good value provided the ship was clean, the food edible, the resort amenities diverting. I embarked in late May to find out.

Most cruises from Florida depart from Miami, Fort Lauderdale or Port Canaveral, each accessible from a major airport. Palm Beach offers fewer flights, but the cruise line’s website suggested getting tickets aboard the new Brightline train from $10 for the 43-minute trip between Fort Lauderdale and West Palm Beach.

[Brightline is the only private intercity passenger train service in the country. Read more about its plans to expand in Florida.]

The sleek, snub-nosed trains operate from modern downtown stations that allowed me to conduct my own pre- and post-cruise shore excursions on foot, with the occasional assist by free trolley (West Palm) and free Freebee electric shuttle (Fort Lauderdale). From the West Palm station, it was a 10-minute Uber ride to the ship.

After a quick check-in, boarding the ship required running a gauntlet of people with something to sell: the photographer, shore excursion staff, restaurant and alcohol reps. I’d pre-booked an excursion, passed on the $33 upgrade to dine in the steakhouse and received a 6 p.m. seating assignment in the Yellow Elder dining room from a weary reservationist.

“You will get a table at the window and avoid the drunkards and loud teenagers,” he said, explaining that the drinking age changes to 18 in international waters.

From the size of the five-deep sales force handling alcohol, booze is where the cruise line makes money. One tout explained that drinks on the ship are $12 each and if I had five a day I would be better off buying the 10-drink package at $75.99 (there’s also a nonalcoholic package for $35, and unlimited soda for $21). When I mentioned that struck me as ordering my hangover in advance, they pushed a bucket of beer package. I finally relented and purchased a bottle of wine when the sommelier promised to store the unfinished bottle and bring it to me at dinners nightly ($49).

The resort at sea

Having taken bargain cruises, I was prepared for a tiny, interior, windowless room. Instead, exterior cabin 6126 had a large porthole window next to a small table and two chairs, a queen bed, mini refrigerator and relatively spacious bathroom with a curtained shower. Internet access cost $15 for 24 hours.

Up four floors, past the Tuscan landscape art that betray the ship’s origins, there’s a fully equipped gym that in two days of use I shared only once, with a staff dancer. It is part of the spa, offering a range of treatments from $20 brow shaping to 75-minute Balinese massages for $180.

At the 5 p.m. sail-away party by the aptly named Plunge Pool (there’s also a small adults-only pool), entertainers led passengers in a conga line and “The Macarena.” The ship comedian, Vince Taylor, reminded the crowd, “Remember, what happens on the cruise stays on Facebook!”

At the bar, I ordered a Bahamian Sands beer ($6.50) and met a multigenerational family from Georgia celebrating a daughter’s graduation from medical school, a Colombian mother and daughter who praised the trip as “más económico” compared to alternatives, and young couples across the racial spectrum cruising for the first time. My fellow passengers were also far younger than the 50-plus set that tend to dominate longer cruises. The company says its core demographic is 25 to 45.

Some took the cruise to gamble in the ship’s casino. Others combined it with an island resort stay, getting off for a few days before returning (the cruise line sells ship and hotel packages). At dinner — a light “Floribbean” meal of shrimp cocktail and seared tuna niçoise salad — I met Kathleen Young from Central Florida, who uses the ship monthly to avoid flying on a small plane to the island, where she was receiving treatment for cancer. 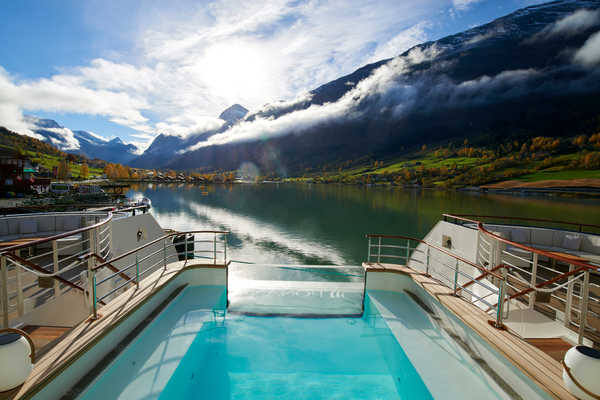 “They practically pay me to cruise,” she said, enumerating her $129 booking, including 10 free drink tickets and a $50 shipboard credit, perks that are often included in sales (my package included both, but until I met Kathleen I didn’t realize you have to ask for the drink tickets at the bar, as they were not distributed at check-in).

My new ship Sherpa, Kathleen introduced me to many secrets of the cruise, including the seated breakfast in the dining room unknown to buffet-goers, using drink coupons to buy 1.5-liter bottles of water (the ship prohibits bringing your own) and hitting the lounge to catch Sax and Songs, made up of a saxophone player and an R&B singer. She insisted on sitting in the front row for the nightly Las Vegas-style musical review performed by a cast of 10 talented singers, dancers and aerialists and carried on at the late-night Latin dance party when I called it a day. Most of the entertainment was free, except Vince Taylor’s hilarious, R-rated stand-up show, which cost $9 for two tickets during a two-for-one sale.

“Who wants to go to the number one party beach on the island?” bellowed our bus driver on a Best of Grand Bahama shore excursion after we’d docked on the second day.

Not me, but it was too late. I’d already signed up for the trip with Bahamas Adventures ($52). My intended excursion, to bike around the island ($89), was canceled for low enrollment. Unfortunately, the “best” island itinerary, involving two shopping stops and a nature center followed by an overcrowded beach club blaring Miley Cyrus’s “Party in the U.S.A.,” wasn’t close. When the early 1:45 p.m. shuttle back to the boat didn’t appear, a band of five of us pressed the staff, who eventually put us on a bus with passengers of the Carnival Freedom, also docked for the day.

The happiest passengers back on the Classica had taken one of the beach excursions ($39 to $89) for a long day of uncomplicated sunning and swimming.

On the bus ride back to the ship, a Carnival Freedom guest asked if Bahamas Paradise was like Carnival. “Not exactly,” I said, and when our ship pulled out that evening, I could see how right I was: The Freedom had a ship-top basketball court, water slides and a giant screen beside the pool.

For $129, you give up such ship amenities. But I also relinquished FOMO, the fear of missing out that strikes me on ships with daily schedules of spinning, salsa dancing and cooking classes. (Though there are some activities, including a scavenger hunt that required participants to find a man wearing a bra, among other absurdities.) For the most part, the ship frees you to sunbathe, read and, of course, party. It’s a good value and value was the talk of the ship, onboard and off.

A starter kit for escaping into the world.

“Can you believe that ship’s going through the Panama Canal,” said the immigration officer back in Palm Beach as I disembarked, mentioning an upcoming nine-night cruise. “Only 500 bucks.”