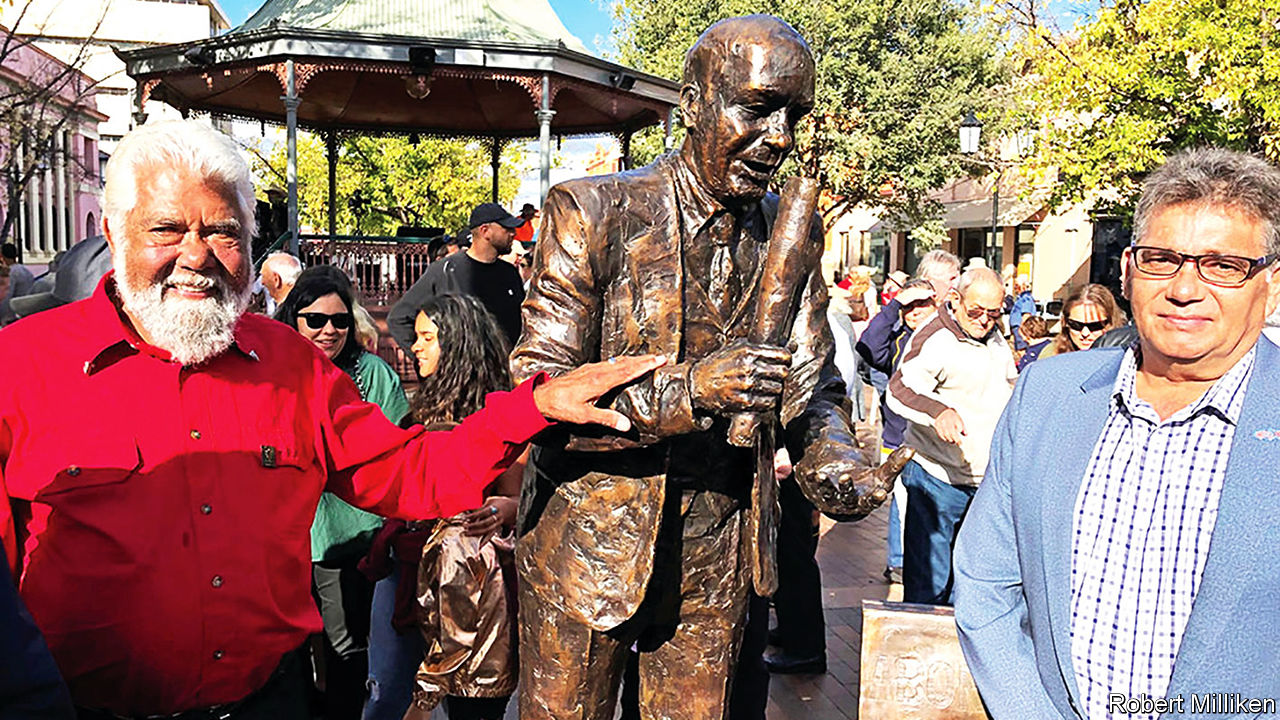 THE OUTBACK town of Dubbo in May unveiled one of Australia’s few public statues of an Aboriginal (pictured). William Ferguson, a pioneering campaigner for Aboriginal rights, founded an organisation in the town in 1937 to fight government interference in Aboriginals’ lives. The following year, as Australia marked the 150th anniversary of British settlement, Mr Ferguson and other Aboriginals held a “Day of Mourning” in Sydney. “Surely the time has come at last for us to do something for ourselves,” he told that gathering, “and make ourselves heard.” Aboriginal activists are still campaigning, this time for a “voice to parliament”, a body to advise governments on policies that affect indigenous people. However the government, a coalition of two right-wing parties, won’t hear of it.

More than 3% of Australia’s 25m people are Aboriginals. Their forebears lived in Australia for perhaps 60,000 years before the British arrived in 1788. Unlike New Zealand’s, Australia’s colonisers never signed any treaties with the original inhabitants. Instead, they first openly persecuted them and then abused them in the name of civilising them. Today, Aboriginals tend to die younger than other Australians and spend more time in prison before they do, among other blights. Successive governments’ efforts to improve their circumstances have disappointed, in part, Aboriginal leaders contend, because Aboriginals do not have enough say in the design of such policies.

In July Ken Wyatt, the minister for indigenous Australians, announced that the government would, by the end of its three-year term in 2022, hold a referendum on giving “constitutional recognition” to Aboriginals. (The constitution used to mention Aboriginals as being under the jurisdiction of state governments and not to be counted in the census, but since a revision in 1967 does not mention them at all.) Aboriginal leaders want the new amendment to be more than symbolic. Two years ago activists held a “National Constitutional Convention” at Uluru (Ayers Rock) in central Australia to discuss what it should entail. They called for “power over our destiny” and for a “First Nations Voice enshrined in the constitution”.

Labor, the main opposition party, supports the idea of an advisory body with a constitutional underpinning, to protect it from what Linda Burney, its shadow minister for indigenous affairs, calls the “whim of any government”. She recalls how a previous right-wing government simply abolished a commission charged with protecting Aboriginal interests 14 years ago. The government, however, has dismissed the “voice”, as a third chamber of parliament. Conservative commentators say creating such a body would flout racial equality by giving special rights to Aboriginals.

Murray Gleeson, a former chief justice, has assailed such arguments. “What is proposed is a voice to parliament, not a voice in parliament.” To him, such an idea “hardly seems revolutionary”. On the contrary, he says, it would be an “appropriate form of recognition”. What the government considers appropriate is less clear. Mr Wyatt has promised to work with Ms Burney to craft a proposal. Both are Aboriginals—a breakthrough in itself. The debate about the voice, Ms Burney says, will be “the story of this term of government”. ■