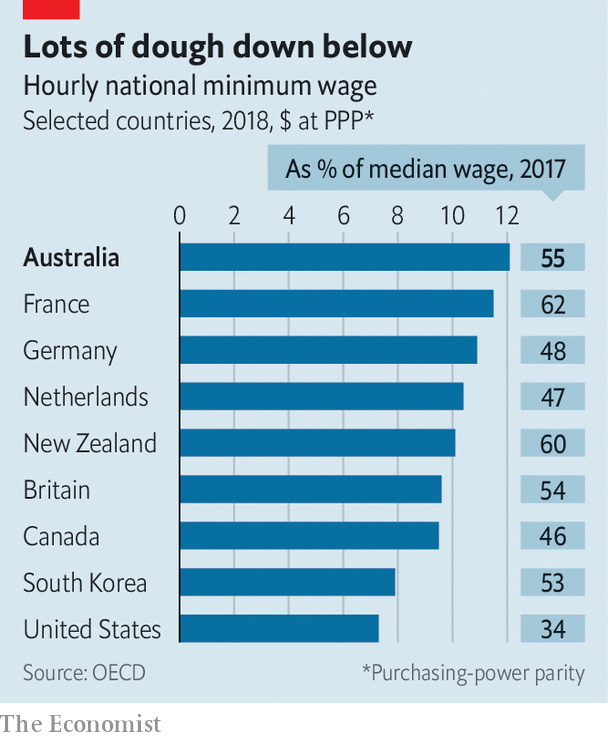 AUSTRALIA HAS long been at the leading edge of minimum wages. The state of Victoria was the second place in the world to introduce a wage floor in 1896, beaten only by New Zealand. A landmark legal case in 1907 took a more expansive view of a fair wage, ruling that it should be enough to maintain a family with three children in “frugal comfort”. Australia is still at it: it now has the world’s most generous minimum wage, reclaiming a distinction it last held more than a decade ago.

The OECD, a club mainly of rich countries, compares minimum wages around the world by adjusting for inflation and the cost of living, and converting them into American dollars. On that basis Australian workers pulled in at least $12.14 an hour last year, up by nearly 4% from 2017. That puts them narrowly ahead of their peers in Luxembourg, ranked second, and a whopping two-thirds better off than federal minimum-wage earners in America (see chart).

Australians may be incredulous to learn that they are doing relatively well. In recent years one of their big gripes has been sluggish wage growth. The norm in Australia used to be nominal annual wage increases of about 3% to 4%. Even after the global financial crisis of 2008, wage growth remained strong, thanks in part to the natural-resources boom. But over the past five years the resources sector has lost its fizz, and wage growth has ebbed to about 2% a year, lower than in America.

That makes the high minimum wage all the more notable. The Fair Work Commission, an independent panel that sets the minimum wage after considering submissions from industry and the unions as well as academic research, raised it by 3% this year, after increases of 3.5% in 2018 and 3.3% in 2017. These rises have outpaced both inflation and broader wage growth, and have helped give low-end workers a somewhat bigger share of national income.

It used to be an article of faith among economists that higher minimum wages would cause job losses, but data from Australia add to evidence that counters that assumption, at least as long as increases are gradual. A study by the Reserve Bank of Australia (RBA), the central bank, examined minimum-wage increases between 1998 and 2008, and found no discernible effect on employment. Similarly, over the past five years, Australia’s unemployment rate has fallen steadily.

The value of the minimum wage is especially important in Australia since the pay of so many workers is linked to it. Under a national system of industry-wide salary awards, pay in many jobs, from cabin crew to funeral directors, is in effect indexed to the minimum wage. Every time the minimum wage goes up, so does the pay of nearly a quarter of Australians, making it a powerful lever to affect the economy as a whole.

The RBA seems pleased with the boost to wages. It wants higher earnings to lift inflation, which is below its target of 2-3%. With the housing market in the doldrums, the economy is growing at the slowest pace since 2009, threatening Australia’s 28-year growth streak. But low pay rises, says Philip Lowe, the head of the RBA, harm the economy more than low house prices. ■