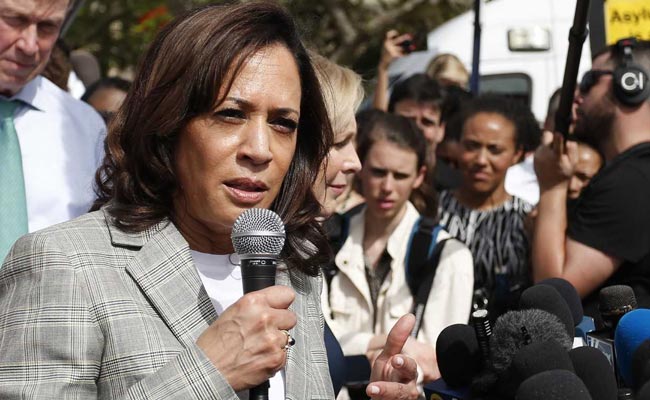 Sen. Kamala Harris, one of only two black presidential candidates in a field of two dozen, had a history-making moment on the debate stage Thursday night when she challenged former vice president Joe Biden over racial issues.

But as the reaction to her debate performance poured in, so did the racist attacks on social media, where some accused the California Democrat of not being black enough, and others suggested she was not really American.

On Twitter, some commenters suggested Harris was unfairly portraying herself as African American, since she is the daughter of a Jamaican father and an Indian mother. By Saturday, Harris’s campaign spokeswoman had retweeted nearly a dozen comments and articles defending her boss, and Harris’s 2020 Democratic challengers forcefully condemned the attacks on social media.

“This stuff is really vile and everyone should speak out against it,” Lily Adams, Harris’s spokeswoman, wrote on Twitter.

“The attacks against @KamalaHarris are racist and ugly,” Sen. Elizabeth Warren, D-Mass., tweeted shortly after. “We all have an obligation to speak out and say so. And it’s within the power and obligation of tech companies to stop these vile lies dead in their tracks.”

Minnesota Sen. Amy Klobuchar wrote: “These troll-fueled racist attacks on Senator @KamalaHarris are unacceptable. We are better than this (Russia is not) and stand united against this type of vile behavior.”

Caroline Orr, a behavioral scientist who studies the spread of disinformation online, noted on Twitter a surge of related anti-Harris tweets that posted within minutes of each other during the debate.

“Efforts to attack Kamala Harris’ race have been around for a while, but a huge volume of tweets pushing this manufactured narrative appeared tonight right after Kamala pointed out that she was the only Black woman onstage,” Orr wrote, with images of the tweets questioning Harris’ racial credentials.

At Thursday’s debate, Harris told Biden that his past stance against federally-mandating busing black students to white schools was personally hurtful because she had benefited from that educational opportunity as a little girl. Afterward, some people on social media falsely claimed that Harris couldn’t lay claim to the afflictions of African Americans.

In sharing that message to his millions of followers, Trump Jr. tweeted: “Is this true? Wow.”

“This is the same type of racist attacks his father used to attack Barack Obama,” Adams said in email to The Washington Post. “It didn’t work then and it won’t work now.”

Other fringe social media accounts echoed the birtherism conspiracies fueled by Donald Trump before he was in politics regarding President Barack Obama’s citizenship. Now they are questioning whether Harris was eligible to run for president, calling her an “anchor baby” because she was born in the United States to immigrants.

Harris is the daughter of an Indian mother and a Jamaican father. When she’s asked how she identifies herself, Harris will often say, as “an American.” But recently, she’s leaned in more to what it meant to grow up black in the wake of the civil rights movement – she was born in October 1964, just months after the Civil Rights Act had been signed into law.

At a recent campaign event sponsored by Planned Parenthood, Harris spoke about growing up and realizing that people treated her mother with less respect because of the color of her skin.

“I remember people looking down at my mother, assuming she was somebody’s housekeeper and treating her like she was a substandard person,” Harris said. “She was a housekeeper, she kept our house, and happened to be a breast cancer researcher. There was an assumption that this woman had no power and should be given no power.”

“I realize now that I made a decision at a young age,” she said, “that I’m not going to let anybody do that to anybody else.”