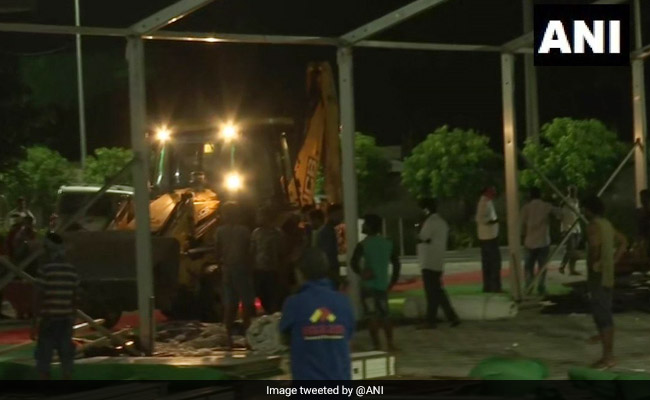 The demolition of an upscale building with glass walls used by former Andhra Pradesh Chief Minister Chandrababu Naidu as a venue to meet the public, hold press conferences and conduct administrative work began late yesterday night. Its demolition had been ordered by current Chief Minister Jagan Mohan Reddy, who claimed the building was “illegal”.

The building, called ‘Praja Vedika’, is located near Mr Naidu’s residence, which Mr Reddy’s YSR Congress has claimed is also built illegally, and was constructed by the Telugu Desam Party (TDP) government in 2017 at a cost of Rs 5 crore.

Mr Reddy last weekend held his first meeting with district collectors since becoming Chief Minister and announced the demolition of ‘Praja Vedika’ during the meet.

The TDP chief had earlier written to the new Chief Minister to allow him to retain the hall so he could work from there as the Leader of Opposition in the state assembly.

“I wish to continue the same arrangement, that the ‘Praja Vedika’ be declared as the residence annexe of the leader of the opposition, to facilitate me to meet legislators, visitors, common public and discharge my duties,” he wrote.

Mr Naidu’s TDP was voted out in Assembly polls in April, with Mr Reddy’s YSR Congress claiming a massive mandate. The party also decimated the TDP in parliamentary elections, winning 22 of 25 seats to become the fourth-largest in parliament, behind only the BJP, the Congress and the DMK.

Mr Reddy, in his meeting with Prime Minister Narendra Modi on May 30, had discussed issues regarding special category status for Andhra Pradesh, a demand over which Mr Naidu broke away from the National Democratic Alliance.

Special status will mean a large infusion of central funds to help with the state government’s plans to develop its new capital Amravati. This has been a long-standing demand of Andhra Pradesh government since Telangana was carved out of it in 2014.

With input from ANI