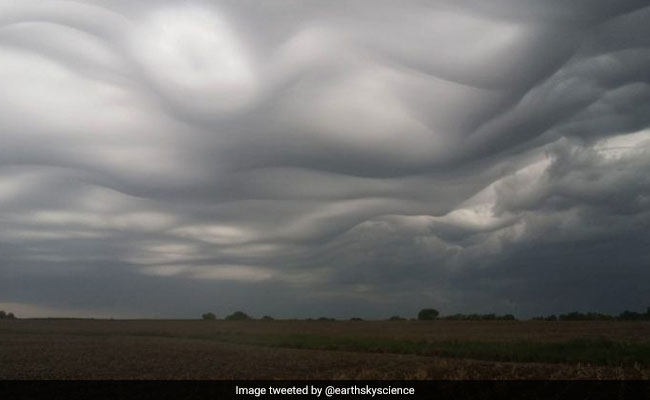 Paul McCully was having a relatively normal Tuesday in Myrtleford, Australia on June 11. Then he looked up.

“It looked like inverted waves moving quickly across the sky,” wrote McCully, who was driving at the time. He pulled over to snap a photo. “It was a stunning sight.”

The wavelike ripples resembled choppy seas, as if the ocean had been stirred up by a ferocious storm. But these waves weren’t in a body of water – they were floating above.

McCully captured the elusive undulatus asperatus cloud. It’s as rare to spot as it is tough to pronounce. Undulatus asperatus wasn’t even classified as a cloud formation until 2017. That came eight years after Gavin Pretor-Pinney, founder of the Cloud Appreciation Society, launched a campaign to recognize it, marking the first time in three decades the World Meteorological Organization had updated its cloud classification atlas.

Since their induction in 2017, undulatus asperatus – now simplified to “asperitas” – have been noticed all around the world. It’s believed they exist in regimes of convective activity, meaning they occur near or in the wake of thunderstorms.

Two main theories exist on what leads to the formation. They may be a distant cousin of nature’s most comical cloud formation, the mammatus cloud. Some believe these pouch-like mammatus clouds, which often occur on the underside of intense thunderstorm anvils, descend to a height where turbulent winds sculpt them into crisp, elegant waves.

But that’s just one possibility. The other, more likely cause, is from gravity waves.

Since we can’t see air, we often forget that the atmosphere is a fluid, but it is. And that means all the properties that govern fluids apply. It’s possible to have waves and eddies form in air. Most of the time, they’re invisible, unless they pass through a layer of cloud.

When this occurs, the cloud layer can be bent and contorted, along with the pressure surface it’s “stuck” to. It would be like filling a fish aquarium with water and then jostling it. The waves that form on its surface are akin to gravity waves in the atmosphere. These atmospheric gravity waves frequently occur near strong thunderstorms, when powerful updrafts or downdrafts sent out a ripple-like motion.

But asperitas clouds are much more chaotic, because of interference. When multiple waves from different sources and moving in different directions pass through the same area, their motions combine in an array of choppy displacements. It would be similar to having four people hold different edges of a blanket while whipping it up and down. The pattern will be a chaotic combination of the different “input” waves coming from different sources.

McCully was blown away by what he witnessed. And though it was half a world away from the United States, keep your head up – the next display might hover over your backyard.